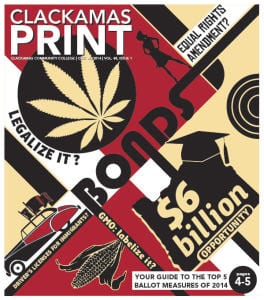 A COLLEGE FUND FOR STUDENTS

The goal of Measure 86 is to cover Oregon’s post-secondary needs gap by creating a permanent fund to finance student assisted needs. The Senate joint resolution claims that it will maintain a highly skilled workforce for Oregon, raise per capita income and lower public services cost. The proposal says that the opportunity initiative creates a constitutionally-dedicated permanent fund that will be invested to generate income. The income from the investment returns will increase student assistance short term for students at community colleges, public universities and private universities while also putting Oregon on the path to permanent solution.

The fund’s investment returns will generate revenue that will be dedicated to student assistance. To maximize the impact of the grants, the administrators of the program would include incentives for:

This particular ballot hits close to home with college students across the state. The result of a yes vote would require Legislature to establish funds for Oregonians pursuing post-secondary education and career training.

Josh Clark said, “I’m all for a cheaper education, but where is the money coming from?” He wasn’t the only one to wonder. According to the government website Oregon’s bonding authority borrows money for certain purposes and then repays the money with the general fund appropriations. And since the funds returns will be invested, it creates a long term solution.

The ballot title reads: “Amends Constitution: State/political subdivision shall not deny or abridge equality of rights on account of sex.”

Voting yes on Measure 89 would amend the state constitution that prohibits any political division and state from denying equality of rights under the account of sex.

Students around Clackamas Community College have been vocal with how they feel about
the issue. Kyla Precourt said, “Well it shouldn’t matter what junk you’re packing!”

A yes vote would not allow current prohibitions on state laws that have the ability to grant or deny privileges/immunities on account of sex. Article 1, Section 20 in the Oregon constitution that says, “No law shall be passed granting to any citizen or class of citizens privileges, or immunities, which, upon the same terms, shall not equally belong to all citizens.”

When student Tim Berry was asked what he thought of those who will oppose Measure 89 simply because a section in the constitution implies what supporters seek, he said, “I don’t see what harm it could do to be more specific. It’s not as if women weren’t once denied things in history.”

A LICENSE FOR THE UNDOCUMENTED?

Oregon will be voting on whether to give undocumented residents alternative drivers licenses, or ‘driver cards’, which would allow them to drive legally for four years at a time after satisfying state requirements. Ten other states have similar laws. The measure would not allow the I.D. to be used “for air travel, to enter a federal building, to register to vote or obtain any government benefit” according to the
drafters of the law. However the Transportation Security Administration (TSA) recently released an official statement that it would accept “driver privilege” cards for air travel. PolitiFact Oregon verified that to be true.

For students on campus, opinions vary on Measure 88.

Clackamas student Kylee Fancher is a yes vote for Measure 88, stating, “This is an equal opportunity country and our state should be.” However some are more skeptical. Cassidy Boen feels that “The only way I’d support it is if they were in the process of getting a green card.” Courtney Miller was concerned that illegal immigrants that fail the driver’s test “are going to drive anyway.”

In a recent poll by NW Market Research 67 percent of registered voters opposed the measure.

SMOKE ‘EM IF YOU GOT ‘EM

The measure would legalize the production and use of marijuana for citizens 21 and over under jurisdiction of the Oregon Liquor Control Commission, with restrictions similar to those in place for alcohol. In addition to prohibiting sale to minors, the law permits citizens to grow no more than four plants and restricts the quantities that may be possessed in various situations.

Arguments in favor focus on safeguarding minors, freeing law enforcement resources, diverting revenue from the black market towards public services and reducing conviction penalties. Arguments against focus on safeguarding minors, testing inebriated drivers, and legal loopholes. “I will vote for it, but I have strong reservations on how it’ll be regulated and how they’ll administer field sobriety tests,” said student Dan Paulosky.

This measure attempts to bring Oregon law in line with 64 other nations that require GMO labeling, including Japan, South Korea, China, Australia, Russia, India and E.U. member states. Neither the Food and Drug Administration nor the United Nations mandate labeling of GMO products.

This measure stipulates that mandatory labeling will help track the health impacts of GMOs, protect the reputation of U.S. imports to countries with GMO restrictions and reduce market demand for genetically engineered food products.