Wildland fire instructor says hiring in the industry is on fire 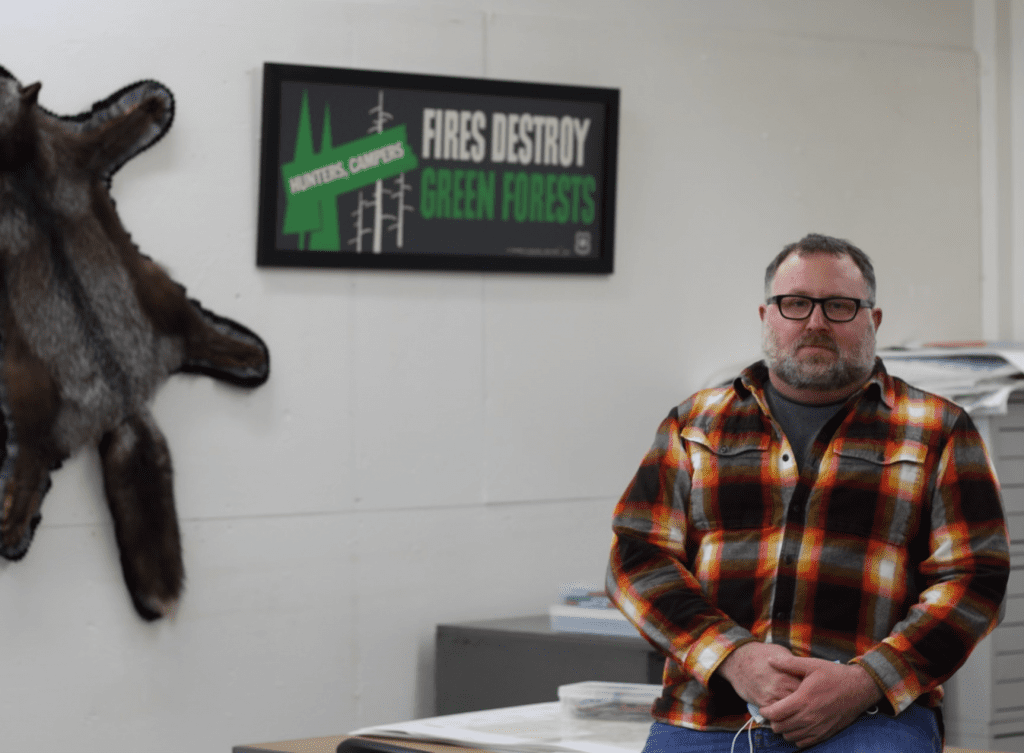 Jeff Ennenga taking a moment in his classroom for a photo. Photo by Ethan Rogers.

The only fires most people think about during the winter months usually involve cuddling, a good book, maybe a mug of hot cocoa. But for Jeff Ennenga, lead faculty of the Wildland Fire Science programs at Clackamas Community College, fire is a year round thought. The Clackamas Print sat down with Ennenga to talk about the program and what we can expect from this year’s fire season.

The Clackamas Print:  What do you do at CCC?

Jeff Ennenga: We primarily teach wildland firefighting classes, forestry first aid, and GIS, geographical information systems. We focus mainly on wildland fire. We’ve been doing that here at the college I think since 2006, and in 2012, we added a degree and certificate.

TCP: What certificate is that?

TCP: If someone wants to get involved in the program what would they do? What would that process be for them?

Ennenga: Yeah, it’s a pretty low requirement to get in, you can actually take one class with us and get a job. And that’s our basic fire course. And then we title it FRP 130 Introduction to Wildland Firefighting. So if people want to get a job this summer, you can take one class with us. We offered spring term, Saturdays, five Saturdays in a row, and just start there and get a job. Come back once you have experience and take some more advanced classes. We have a very well-known program. We have really good success getting people jobs coming out of this program. Private sector, state federal jobs, they’re all posted right now. So if people are interested, they can get ahold of me and I can help them through that process.

Ennenga: I would say the majority of our students are already what we call incumbent workers, so they’re in the field, they work for a fire department, the Forest Service, or the Oregon Department of Forestry, and they’re just taking classes to get more certifications and move up in the organization.

TCP: So I would imagine, if you’ve got a lot of people that are already in the industry, that your program works closely with the Forest Service and other departments.

Ennenga:  Yeah, that list is pretty expansive, we’ve got really good relationships with the Forest Service, Mount Hood, the Columbia River Gorge scenic area, the Gifford Pinchot, the Willamette, they all send students to us, usually in the springtime. We’ve got really strong relationships with the Oregon Department of Forestry, Oregon Health Authority, so we do a lot of *Incident Command System training, as well as all of the state and federal fire agencies here in the Northwest. We get a lot of students from California as well. Most of our local stuff is fire departments and forest service local. Every Fire Department pretty much in the northwest part of the state sends people to Clackamas.

TCP: You run a pretty well known and respected program.

Ennenga: Yeah, very well known with students from all over the country taking classes. We’ve got students from Guam, Hawaii, Florida, Maine, Pennsylvania, and everywhere in between, as well as Canada.

TCP: I think 2019 was the shortest lightest fire season we’ve had here in Oregon. Then 2020 and 2021 were some of the worst. Was there any kind of difference between those years? What can we expect going into 2022?

Ennenga: When we have a busy fire season, people usually come back here after the fire season to take those continuing education classes to get more qualifications. The 2019-2020 academic year, we were actually really busy just because people still need training to move on and move up. I think last year, we did nearly 150 classes, we had well over 1500 students come through that year. As far as what next year brings, I have no idea, so hard to put a thumb on, there are parts of the state still in drought, that definitely has an impact.

TCP: Has anything changed as far as response or management that you have seen?

Ennenga: Yeah, definitely. A couple of things to note there, you know we’ve had a lot of big retirement blocks over the last probably 10 years. In 2001 they had the national fire plan and they added a bunch of positions for firefighting. Well, those people are all retiring now. They’ve done their 20 years, and they’re moving on. So we’ve got a huge bulk of retirement happening right now. So we’re actually short, it’s hard to find enough people to do this profession anymore.

TCP: So it’s a really good career to get into right now?

Ennenga: Great career to get into, especially I know Washington DNR (Department of Natural Resources), Idaho Department of Lands and Oregon Department of Forestry have all increased their wages to be competitive. And they’re all hiring more people than they have in the past. There’s a bill in the Senate called Senate Bill 762 (Oregon State Legislature), that just got passed, hundreds of millions of dollars being put into fire suppression. And there’ll be more federal dollars as well, going into prevention. But I know both Oregon and Washington have put a lot more positions on their engines and crews and whatever else they have. So yeah, a lot of opportunity right now, a lot of room for growth actually. And I think the federal government, you know, the Forest Service, the BLM, they’re all going to see a pay increase, probably in the next couple of years. Once the infrastructure bill gets finally pushed through, I think we’ll see probably, you know, five to $10 an hour raises for most of those positions.

TCP: When fire season does hit, what can people do to help protect their property, themselves and their loved ones?

Ennenga: I guess the biggest thing people need to do is, just be informed on what fire season is, when it happens. Know who their fire department is, what information they might have, making sure you know when it’s safe to burn and not to burn and, then from there, it’s about the home. So having a plan. Write an evacuation plan if you do need to evacuate, everything from having medication available and all your valuables in a box and ready to go. And then making sure your home is protected. We almost lost the cell network during the 2020 fires just because of the overload; the tower actually almost burned up, so knowing phone numbers or having them written down is a really good idea. So real basic stuff like that. Like I said, just being informed on how the system works. You can call 911. Sometimes people won’t come because they’re so busy, so knowing when to leave is a really smart thing to do. We have people stay behind that shouldn’t stay behind. So that can be a hazard for a lot of different reasons. So those are some basics.