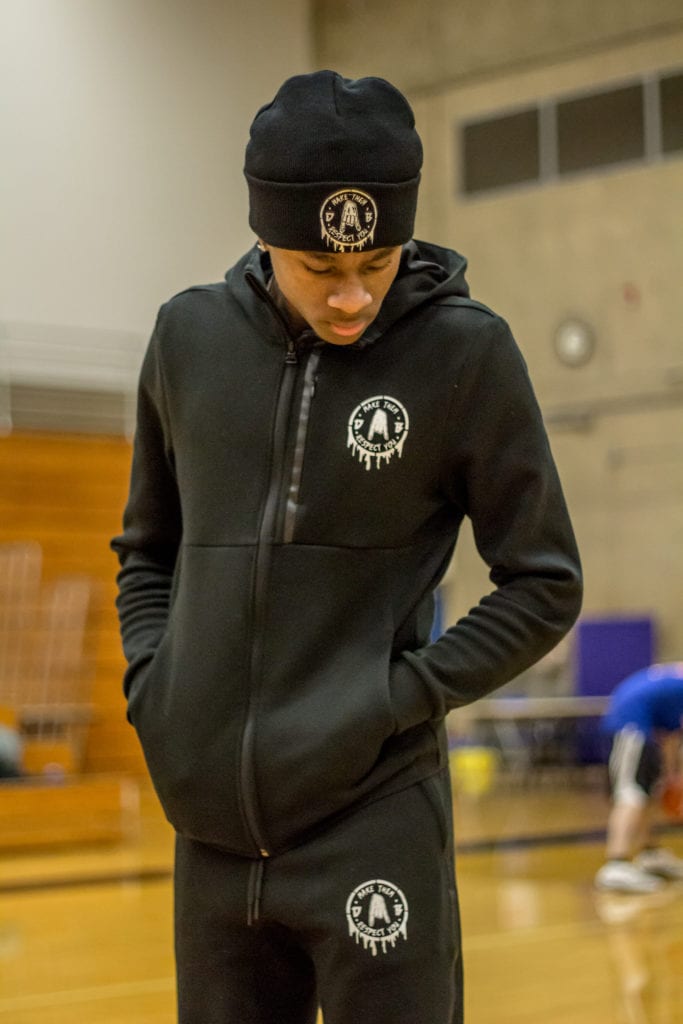 As Clackamas Community College’s men’s basketball team warmed up for their season opener, the Cougars dawned fresh white warm-up shirts with red and blue claw marks on the front.

The design came from a once-homeless teenager who’s now a Clackamas student and basketball player, freshman point guard Devon Banks. His company, Make Them Respect You, has a much bigger mission than making good- looking clothes.

Growing up in Oakland, California, Banks was in and out of foster care from the time he was nine years old, and though his mother, Nidja Marshall, would later regain custody, Banks often had to go back because his mom wasn’t financially stable enough to take care of him.

“We didn’t have that much money and we were homeless and stuff like that when I was living with her,” Banks said. “She used to do a lot of stuff to get money for us to put food in our stomachs.”

It’s those past experiences that give Banks a different perspective on people who are struggling and homeless.

little brother. I see us when we were staying in a motel. I felt that, I lived that life being on the street.”

After experiencing those struggles first hand, Banks knew if he ever had money, he wanted to give back.

Banks said his mother had been a victim of domestic abuse for a lot of his life and the final abusive relationship left her paralyzed from the neck down.

“When I saw her in the hospital, they had tubes and stuff like that all over her, and it looked like her hair was burnt a little bit,” Banks said. “I asked the doctor what happened and they told me, ‘We don’t know, we just found her in the middle of the street.’”

Marshall was badly battered and for the first few weeks couldn’t speak. Eventually Marshall was able to tell Banks about the attack, but she never regained the ability to move.

For the next five years, Banks’ mother lived in a hospital two hours away from Banks. Without a car to make the drive, Banks typically saw his mother only once every three weeks. “Just hearing her voice and telling me to keep going,” Banks said. “She’d say, ‘Devon you know me, this is nothing. I’ve been doing this my whole life. This ain’t nothing. Use this as motivation and if you feel like giving up and don’t want to do it for yourself, do it for me.” While his mother was in the hospital, Banks began to live with his Amateur Athletic Union basketball coach Jensen Best, where he stayed throughout his time in high school.

“It was like having normal teenager in the house,” Best said with a chuckle. “Teenage boys will be teenage boys, but you know he’s like my son.”

It’s under Best’s roof that Banks learned more about basketball but also the daily chores of life.

“I consider [Best] one of my parents,”Banks said. “Basketball- wise, I learned a lot because he’s a basketball coach, but I also learned being a man like washing your clothes and doing your dishes.”

Although Banks had a late start in basketball, it’s because of Best challenging Banks that he was able to make up the experience gap.

“[Best]’s always making me go through different types of challenges, so he always made mea better man and a better basketball player,” Banks said. “[Best] is the one who influenced me to [take basketball serious]. He said, ‘If you’re going to do it, you better go all out.’”

As Banks found stability living with coach Best, his mother’s body was starting to wear down. Five years after first being admitted, Marshall’s brain started to swell and her heart stopped for five seconds, Banks said.

The passing of Banks’ mother in 2017 gave Banks the inspiration to take his idea of starting a clothing line and put a bigger purpose behind it than just wanting a good looking shirt.

“When my mom passed away last year, that’s when I was like, alright I want to keep her name alive still,” Banks said. “I was like, you know what, I can do it through my clothing brand. I started taking it serious in 2017 and that’s when everything took off.”

Banks started designing shirts and hoodies with some of the merchandise paying homage to his mother by featuring her birth year of 1972 on them.

“He got inspiration from his mom,” said Banks’ friend and business partner, Jimmy Beltz. “She was his biggest supporter and that’s where some of the symbolism of the brand comes from. She loved helping people. In the community she was really well known as being a good person and being the first one

to help people out.”

Starting Make Them Respect You in Oakland was tough because a lot of people there are very skeptical and critical, said Banks.

Banks was able to overcome the critics with the help of friends like Dwayne Leaks, Beltz, and coach Best championing his clothing line and its mission.

“When your friend says, ‘Hey I’m going to start a business,’ you want to be there for them, but at the same time you have your doubts,” Beltz said. “I really believed in [Banks] once I saw how much time he was dedicating to [Make Them Respect You] and the message behind it is really good. [Banks] isn’t doing it as a business, he’s doing it because he wants to help people.” Once Make Them Respect You started to grow and produce sales, Banks was looking for a way to give back to his community and decided on feeding some homeless.

Banks estimates that they fed somewhere between 60 to 70 people. Banks and his friends ordered pizza, bought chips, water and passed them out around the homeless community.

“It was a blessing [to be able to give back],” Banks said. “To see where you come from, I came from not having food, to not knowing where I was going to live, to having a good clothing brand, to being able to give back to people that don’t really have as much as you do. It feels good. Their facial expressions were the best. They were so surprised and so thankful and like I said when I see them I see myself.”

Now at Clackamas, Banks is looking to obtain a degree while maintaining a 3.0 GPA, get a basketball scholarship to a D-I school and raise enough money through Make Them Respect You to host a give back event in Oregon.

Along his journey Banks had gained the respect of a lot of people and even though he’s been at CCC less than six months, he’s already gaining the respect of the team ,especially teammate Matt O’Brien. “[Banks] and I are really close,” O’Brien said. “From day one, we’ve bonded. I love his story and how he helps out people.”

The coaching staff is also excited for Banks to be apart of this program for what he brings on and off the court.

“Life’s kicked him around a lot,” said head coach Clif Wegner “He’s had a lot of reasons to fail and treat himself like a victim, but he’s got the mentality of a survivor, he’s extremely positive, he’s extremely energetic and he’s always looking forward. He’s a great addition as a human being to our program and he’s also going to be a great player for us.”

It’s through struggles and trying times that Banks learned if he ever got the chance he wanted to help people who were struggling, now with Make Them Respect You Banks has found a way to honor his mother and give back to the people whose shoes he once wore.