A look back at CCC Football 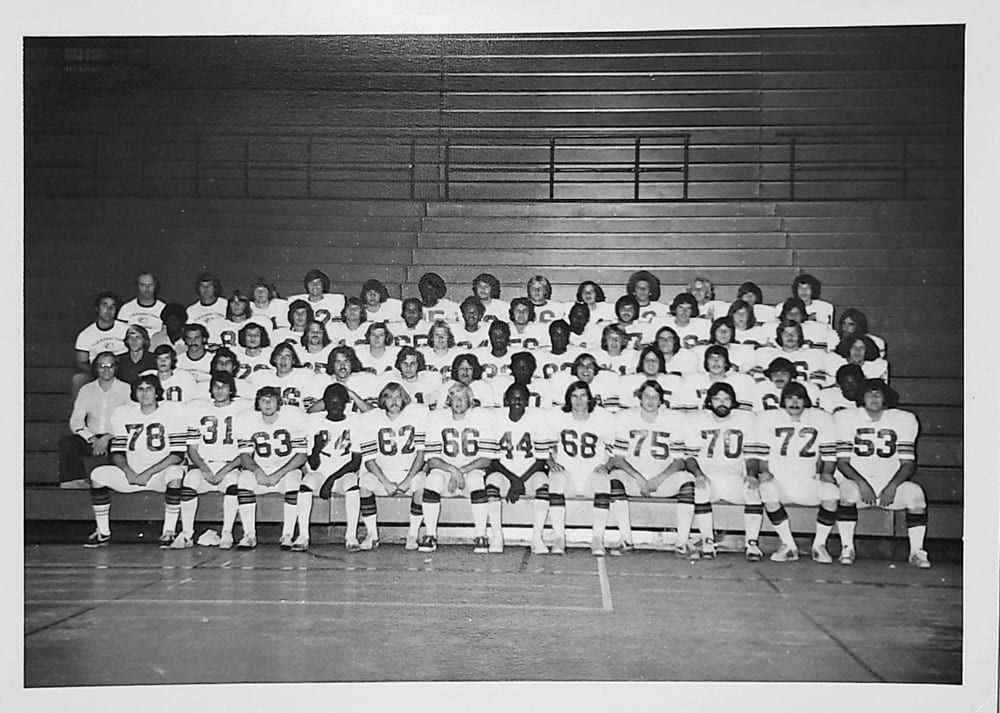 Physical education instructor Paul Fiskum sits in his office on the back side of the weight room and glances out to a field about 100 yards away from his window. Nowadays the field hosts track and field practices, but 48 years ago it was home to Clackamas Community College’s football program.

Good or bad, football is king. The NFL is celebrating their 100th anniversary during the same season college football celebrates 150 years of the game. No matter how much has been learned about the danger of the game, Americans still love it. The game itself has a lot of history and Clackamas was a small part of it, but for such a short-lived experiment, Cougar football made a lasting impact throughout the surrounding communities on and off the gridiron.

Fiskum was among the first recruits to ever suit up in the navy and scarlet for the Cougars in 1971 and like many students now it was at the time a financial decision to attend the two-year college versus a four-year university.

“I was going to play both football and basketball at Linfield,” Fiskum said. “A coach from Clackamas came and visited and we talked, and I started looking at the price tag of Linfield even with athletic aid versus Clackamas and I was like ‘oh.’ I didn’t want to do that to my dad. I had a good visit and thought it would be fun to be a part of a first-year program.”

A bond measure passed by Oregon City voters had given the necessary funds to Clackamas Community College to start a program, but that was about all the Cougars received, necessary funding. No fancy locker rooms. According to Lucich, the automotive center in Barlow doubled as the team’s dressing room for practice. No new stadium was added to the campus and Cougars football, like CCC soccer today, played their home games off campus at Pioneer Stadium. And absolutely no overnights in a hotel, no matter the distance, even Spokane wasn’t far away enough not to drive back.

“I will never forget the trip to Spokane. We left here at 6 a.m., drove to Spokane, played the game and drove home and got home at 6 or 7 a.m. the next day and I went straight to work.”

Todd Lucich would be one of the 30 or 40 teammates to join Fiskum in the inaugural season. Lucich had been a decorated player at Canby High School receiving All-Wilco League honors his senior year at halfback. After his prep career was over, he decided to attend Portland State University to play football. Unfortunately for the 6’0” 220-pound linebacker, PSU didn’t have a junior varsity team then and Lucich and the other underclassmen found themselves as part of the “meat squad.” Unsatisfied with the lack of playing time and the word gathering steam that Clackamas would be adding football, Lucich followed PSU’s offensive line coach, Dale McGriff, in swapping in Vikings gear for Cougars gear.

“I don’t exactly remember how it happened, but they found out I was interested in playing, so they basically gave me a full ride to come to Clackamas,” Lucich said. 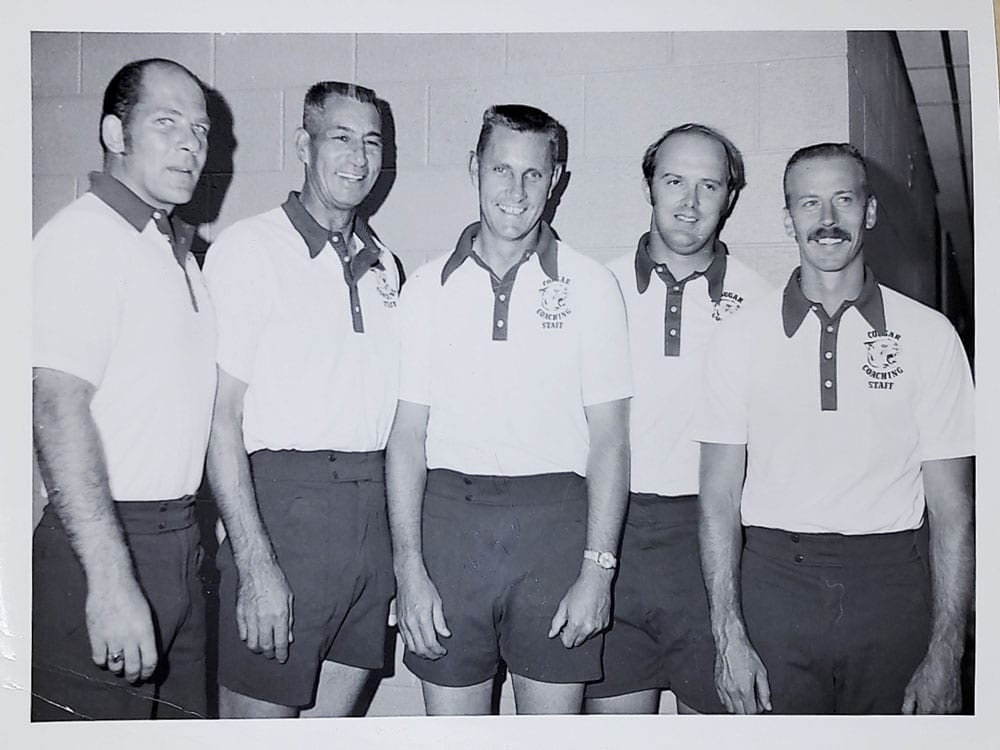 With Bill Hargadine at the helm, the Cougars were ready to begin the 1971 campaign. But it wasn’t a miracle run for the first-year squad. Clackamas was blown out 53-0 against Wenatchee Community College in their first game, and although Clackamas fared better in their second game, losing to Oregon College Education’s junior varsity team 27-33, the injuries started to pile up. Fiskum was lost after suffering a separated shoulder that later needed surgery, and the linebacker stud, Lucich, found himself under center as the quarterback for five games.

“Our first year there wasn’t anyone that could play quarterback, so guess who got the job? yours truly,” Lucich said.

Hargadine had seen Lucich play quarterback in high school when Hargadine was still the head coach at Central High School so he was comfortable with the middle linebacker’s ability to take over as the signal caller. Hargadine’s prediction paid off as Lucich passed for 525 yards while still playing defense and punting for an average of 44.5 yards per punt. It seemed the ex-Canby star could do it all, but it wasn’t enough to get CCC a win that year.

The Cougars continued to struggle throughout the 1971 season finishing 0-7 while being outscored 269-46.

Although the Cougars struggled in the early years, Fiskum remembers a lot of excitement around the program and their games at Pioneer Stadium. 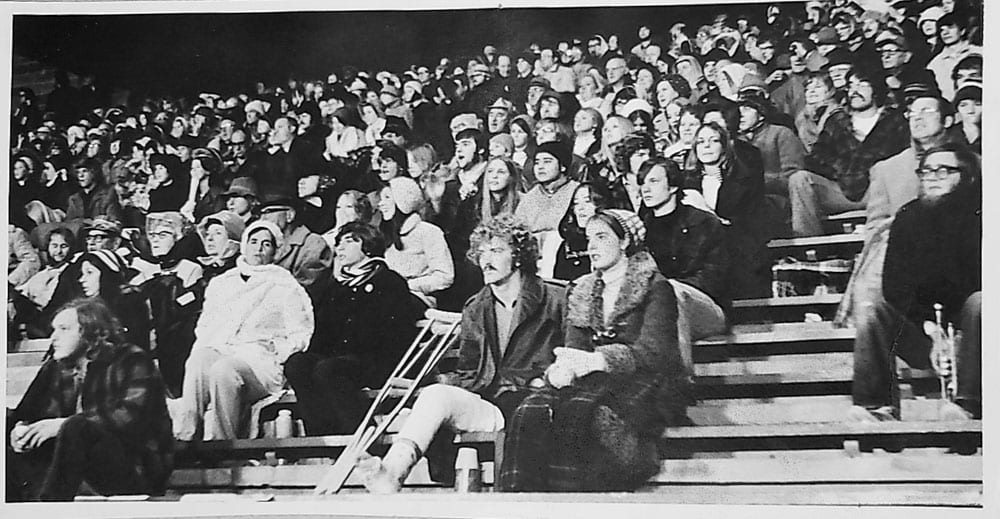 “The atmosphere was really exciting, the school embraced [football],” Fiskum said. “We had double the number of athletes then and it was a huge community of athletes and the apartments were full of athletes.”

Fiskum remembers the social life around athletics and campus back then and although he didn’t say it, it seemed they had a lot of fun living around each other.

“Going from person’s house to another, but you know, we didn’t party at all. We were straight laced as could be,” Fiskum said with a wink and a grin. “It was an exciting time, the teams really supported each other.”

The following seasons, the Cougars continued to bring in more and more talent, became more and more competitive and it seemed football would succeed at CCC.

But what Fiskum and his teammates may have not known at the time was the strong pushback from the community.

Shown in athletic department archives, then college president Dr. John W. Hakanson was receiving plenty of letters from private citizens of Oregon City and Clackamas County regarding the “over-emphasis” CCC was putting on athletics.

In a letter from J. David Myers, Chairman of Agriculture, sent to Hakanson on June 1, 1977 Myers wrote of a run in with a citizen of Canby that asked Myers about the football team:

“‘When is that college going to do away with that God damn football team?’”

Myers later writes on page two that the college should drop the program.

“… This college should drop the football team, make a reduction in the budget that reflects extra state money and money saved from football, and get on a selling campaign to the public that we have been emphasizing athletics too much and from now on our academic, vocational, and community education programs are our priority.”

In the initial year, the football budget was $5,844 which is equivalent to $25,226.90 in 2019, but as the program became more competitive with the other football schools in the area, so did their budget.

In the summer of 1977, CCC grad Gary Cornelius came up with the idea that a community- based committee could help the board make a decisive decision on football. Cornelius teamed up with community members to study the pros and cons of a football program. The Blue Ribbon Committee as it was known would present their findings to the board after the season was completed.

On the field, the Cougars were putting their most talented teams together with players like free safety Mark Leroy, who signed with the Nebraska Cornhuskers after the 1977 season holding then career record for interceptions with 13. At Nebraska, Leroy’s team made the Orange Bowl in 1978 and the Cotton Bowl in 1979.

Brian Freitag who played strong-side linebacker for the Cougars during the 1975-1976 says that the talent at Clackamas was unmatched.

“The thing people don’t realize is, shit, we had eight guys go to Portland State, one guy go to Michigan State, one guy go to Nebraska, I mean we had some real talent,” Freitag said, “I went to Western Oregon, and we went to the national semi-finals the next year, but when I got there I was going ‘where are all the offensive linemen, where are all the big guys.’ Talent-wise it was pretty phenomenal at Clackamas, we had a bunch of studs.”

But to the naysayers it was never about what the football team accomplished or failed to accomplish, it was a question of whether athletics belongs on the college campus. In one letter to Hakanson a community member asks the president “Is this a place of higher learning or an athletic factory?”

Fiskum said he knew that there was some pushback from the community, but he didn’t know how severe.

On December 15, 1977, Clackamas football suffered the worst loss in its history. A 4-2 vote from the board of education to abolish the CCC football program. Just like that, it was over.

“It was really sad,” Fiskum said. “Football was a political or administrative controversy from the time it started. There were some people in high places that felt we should’ve never added a football team. Its whole time, it was always an issue for some.”

The day after the vote, the program was dead.

Coaches, who no longer had jobs, started scrambling to help their athletes find new schools where they could continue to receive an education and play football, some hung up their cleats and helmets for good.

After football was abolished, Hakanson remained president until 1984 when he retired. He passed away in 2017 at the ripe old age of 96.

Fiskum bounced around as a coach, moving to coach Mt. Hood in 1978 which at the time still had a football program. It was cut that winter. After the Saints program was lost, Fiskum returned as a coach to CCC, this time as a softball coach. Over the next 30 years, he built the softball program into a perennial powerhouse. Last summer he was inducted into the CCC athletic hall of fame. Fiskum said the wins and losses have faded, but the memories and friendships have remained.