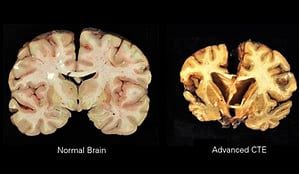 “Maybe the point is to say, ‘Okay well you’ve had these many injuries to your brain: you’re done. You can’t do it anymore.’ At what point is that?” said Keoni McHone, head track coach and physical education instructor at Clackamas Community College. McHone survived a car crash two years ago and suffered a traumatic brain injury as a result in addition to other injuries. He has had to combat the side effects ever since, and McHone is but one out of the millions that have had to battle the life-lasting effects of head trauma be it through sports or misfortune in everyday life.

CCC’s high caliber wrestling team is heading into nationals without two of their All Americans due to concussions, and they will be out for the remainder of the season. This is proper procedure when it comes to head injury, as further blows to the skull could negatively affect the wrestlers for the rest of their lives.

Chronic Traumatic Encephalopathy is but one of many forms of degenerative brain diseases and it’s most commonly found in athletes, though anyone who has suffered repeated blows to the head is a candidate. It destroys the brain in a way similar to Alzheimers, though symptoms can appear as early as 17 and is is not hereditary. It is the direct result of repeated blows to the head. It’s a newly discovered diagnosis being found in 2002 by Bennet Omalu, a renowned physician and modern day pioneer in the field of chronic head trauma. It was originally seen only in boxers in the 1920s, though today it is being seen in football, soccer, basketball, hockey, lacrosse, and many other sports. “A lot of the coaches and even a lot of doctors weren’t really aware of the significant impact of it, and they’re starting to see the depression in a lot of people that have had multiple traumatic brain injuries resulting in CTE.” said Mchone.

Head wrestling coach Josh Rhoden is also no stranger to concussions and understands that they come with the territory. “Head injury is way more prevalent than I think we thought it was.” Said Rhoden. “The more we find out about head injuries, I think the more frequently we find guys having concussion-like symptoms. We pay attention to the cues and we take precautions. This year alone we lost two returning all Americans for the season. Joey Daniel and Zeth Brower, both to concussions.”

The wrestling team also trains differently than when Rhoden arrived in 2006, steering away from constant heavy sparring. “Low to no contact in terms of combative wrestling early on.” Said Rhoden. “We’ve gone two weeks off at a time during the season training cycles that are set.”

He says many of the successful past teams followed proper protocol when encountering injuries. “It becomes more of how can we get you healthy versus how we can use you as an athlete. Especially when it comes to head injuries because there’s only so many of those you can get and it’s a wrap.” said Rhoden. “I want to win. Yes, we love winning national titles and we do really well here, but is a national title worth Johnny’s life? No, it’s not.”

After experiencing symptoms of a TBI (Traumatic Brain Injury) following his accident, McHone visited two different doctors, both of which ran baseline tests and only one diagnosed him with a basic post-concussion syndrome. Both refused to run an MRI and both refused to do any kind of brain scan. It took him a full year from when he first reported symptoms to see a neurologist.  “I asked to be referred to a neurologist and they denied me that as well. I didn’t get to see anybody regarding a brain injury,” said Mchone. “They didn’t even let me see a speech therapist or anything like that. I actually had to pay $700 out of my own pocket at a specialty clinic, and they diagnosed me, but that was basically a year after the accident.” Mchone said he still experiences issues sleeping, along with frequent daily headaches.

A 2016 study published by the Journal of Head Trauma Rehabilitation found that 56% of patients who had a mild TBI (also known as a concussion) from 2009–2010 were not diagnosed during their emergency room visit. Granted this was a decade ago, though it emphasizes the fact that even medical professionals are having a hard time properly diagnosing any form of head trauma. The side effects of repeated brain trauma are numerous, and they can easily last a lifetime. While personal accounts vary from person to person, depression, anxiety, memory loss, impulsive behavior, and even abnormal aggression are commonly seen. 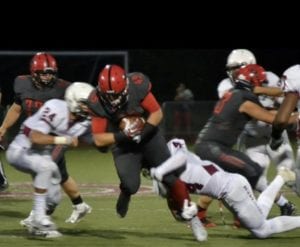 Tanner Smith runs the ball while tied up.

In July of 2017, 202 donated brains were studied to determine which post-mortem football players had developed CTE. These brains not only represented high school, college and professional football players but sons, fathers, and brothers. Of the 202, CTE was seen in 177 of them. 111 of the donated brains were NFL players, 110 of which had developed the disease as well. It was also found in three of the 14 high school players and 48 of the 53 college players.

Tanner Smith, a former football and basketball player for Oregon City High School, grew up watching the NFL and said he was hooked from the very start.

Smith had a successful stint as an athlete, playing on the varsity football team as a freshman and playing on the varsity basketball team as well. While sports have played an important role in his growth as an individual and as a teammate, he left the game in the interest of his health. He began playing full-contact football in third grade and believes he has suffered over a dozen concussions since.

He recalled enduring a concussion at the age of 11. “As far as I can remember the first time I got injured was when I was in probably fifth grade,” Smith said. “It was actually a concussion but it was kind of a freak accident during practice.”

Smith says that coaches warned the children of the dangers of head trauma, actively watching out for injuries and a concussion test was administered in high school. “I think they definitely did but it wasn’t taken as seriously when I was growing up as it is now. It was always kind of just assumed that if you hurt your head you would just rest for the next week until the next game and you would be good to go,” Smith said. “Once I got to high school I think we had a mandatory day where we would do a baseline concussion test we could take and compare to our original scores if we ever thought we had a brain injury. Our trainer also talked about the general symptoms and effects, but it was never anything super in-depth.”

Being a varsity football player for four years takes its toll, and with so many hits in a single game let alone a season some hits go unnoticed. “I believe I had three diagnosed concussions. They were usually treated by telling me to sit in a dark room with no TV or video games,” Smith said.  “I had been diagnosed with three concussions but figured I’d had closer to seven or eight.”

Smith is aware that people are advocating for tackle football to start at a later age, though he feels this could hurt the players. “I think it’s extremely important to learn how to properly tackle and not use your head when you’re playing at a young age,” said Smith. “So when you’re older and hits are more consequential you have that proper form down as muscle memory.”

While he wants his son to be a football player, Smith also intends on insuring his brain stays intact for as long as possible. “I would definitely let my son play football because I think the life lessons you learn from it are very important, but I will always put safety first,” Smith said. “If there was some research that came out that showed playing at a young age puts kids at a higher risk for brain injuries then I would definitely reconsider and most likely make my son play flag football,”

Although there’s a lot on the line when players suit up, Smith feels that further development in the equipment being used could reduce head trauma.

“I think there are definitely ways to make football safer, but advancing technology is the most important step. I think 10-15 years from now there will be helmets that do a much better job of protecting the brain from concussions.” said Smith. “I also think the NCAA and NFL are doing a good job of changing some rules to make the game safer like ejection penalties for targeting, making blindside blocks illegal, making leading with the head a penalty, cutting down on the number of kickoffs, and banning hits on defenseless receivers,”

Smith agreed that the NFL mistreats their post-career athletes. “You have leagues like the NFL that take care of you while you’re in it, but once you’re out and need help they’re nowhere to be found,” Smith said. “I think it’s also interesting seeing these star players starting to retire at young ages like Luke Kuechly and Andrew Luck and they’re passing up insane amounts of money but you can’t blame them one bit for putting their health first.”

Contact sports will continue for many years to come, and so will the head trauma. It’s unfair to expect others to not participate, but it’s immoral to ignore the rising issue especially when it affects all age groups so drastically. Recognize when enough is enough. There is a road to recovery out there for anyone dealing with brain injury, and the damage being done can be limited as well. Be smart, be safe, and like the millions of worried parents always scream, wear a damn helmet. 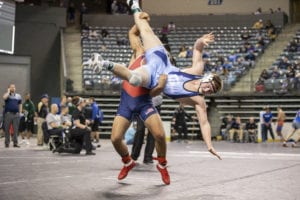 Joey Daniels prepares to throw down his opponent.