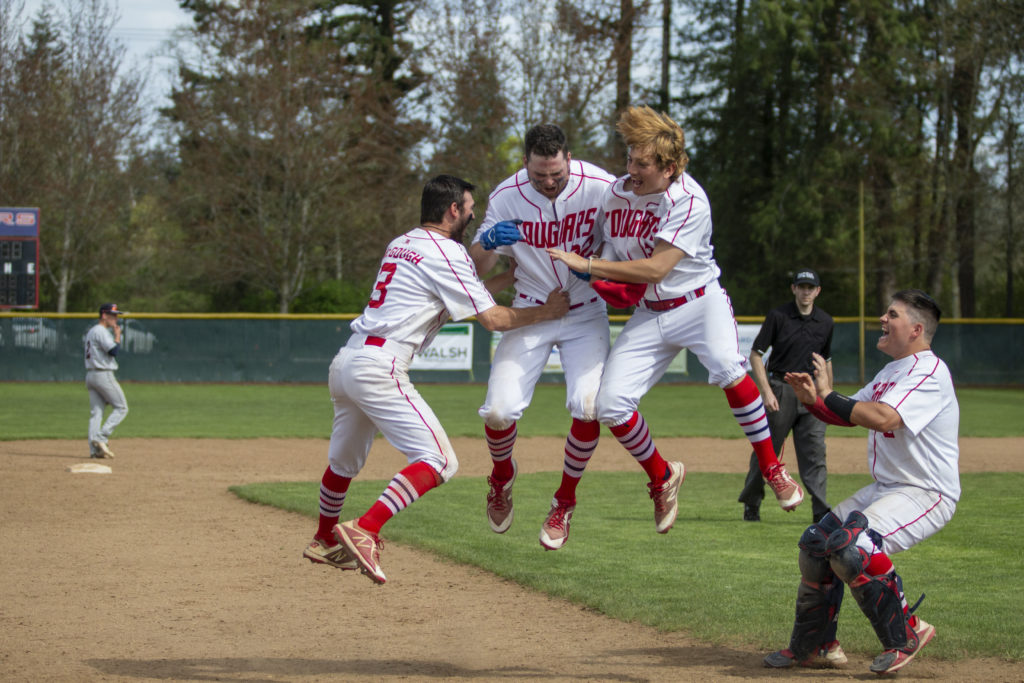 After one of the roughest starts in recent memory, the Clackamas Community College baseball team put together a fantastic weekend of baseball t o improve to 4-8 in league play and fifth place of the South Region.

Coming into the weekend, Clackamas was on a 15-game losing streak and it looked like the Cougars were destined for a last place finish in the South Region. Their destiny changed in an 11-inning marathon.

The Cougars quickly jumped out to a 2-0 lead after the first inning on a double by freshman third baseman Jaelen Bradley.

Southwestern Oregon Community College scored a run in the third on an error by freshman second baseman Jordan Kendig in the third inning but were held scoreless after that until the ninth inning until freshman first baseman Jordan Crawford cranked a home run that tied the game at 2-2.

It looked like Clackamas might lose again as momentum shifted SWOCC’s way, but not this time. In the bottom o f the eleventh inning with two outs and a runner on second Clackamas’ freshman first baseman Dan Seymour stepped to the plate and played the role of the hero as he scorched a double that brought the winning run home. The Cougars won 3-2.

After the marathon, the Cougars bats stayed hot and they won 6-2. Sophomore pitcher Joseph Cassidy pitched an outstanding six innings for Clackamas, but after throwing 96pitches, Cassidy started to lose control and freshman pitcher Austin Butenchoen came in to close it out and did just that.

After the two wins it felt like hope was blooming once again on Clackamas Community College.

“It feels good, it feels really good…finally,” said sophomore outfielder Tyler Jewett after Clackamas’ first two league wins. “We just started a snowball effect hopefully. We just get more games under us now and keep winning that would be the best scenario.”

It may be too early to say if the snowball effect has taken off, but there was a special type of confidence flowing from the Clackamas dugout Saturday afternoon as the Cougars came back from a four-run deficit.

In the sixth inning Clackamas scored three runs to narrow the lead to 4-3, and in the eighth inning they tacked on two more runs to take the lead 5 – 4 . Jaxon Holl, batting .134 on the season, came in clutch giving the Cougars three of their five RBIs.

In the final game of the four-game series, the comeback Cougs struck again after trail ing 3-2, Clackamas mounted three runs to win 5-3 and clinch their first sweep since last season.

Clackamas looks to continue their comeback at home as start a four-game series versus Clark College this Friday. First pitch is set for 1 p.m.