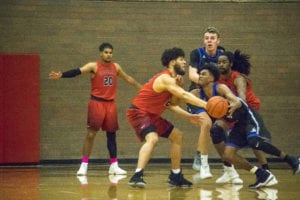 Clackamas Community College’s men’s basketball team ends a four-game losing streak and puts themselves back in the playoff picture with an 88-81 win over Lane Community College on Saturday.

“We were like a patient about to be pronounced dead,” head coach Clif Wegner said after beating Lane. “And all of a sudden they found something to put in your veins to restart your heart.”

All of the Cougars agreed that the game against Lane was a must win for the Cougars, but early on in Saturday’s contest, it didn’t look good for Clackamas.

“It was tough in the beginning [of the game],” sophomore guard Briggs Young said. “We came out really really flat, but we were able to get a group in there that worked really well together and we were able to make a run going into halftime.”

“[I wasn’t] nervous,” sophomore guard Nygil Carr said. “In my mind I’m calm and I know we’re going to come back and do what we need to do.”

Out of the half Clackamas was able to push their lead out to 13 points thanks to a layup by sophomore guard Isaiah Gentry and a three-pointer by sophomore guard Justin Crawford. But Lane answered with a 10 point run that brought the Clackamas lead down to three, 55-52.

With 12:13 remaining in the game, it was tied 61-61. Once again, the Cougars were able to go on a run, this time it was 15-8, giving the Cougars a 76-69 lead with 5:26 remaining. Lane hit a big three to get the game within six. After a turnover by Carr, it looked like Lane would score again on a breakaway layup, but Gentry came out of nowhere to block Lane’s attempt.

“[Gentry] was joking that he was Lebron in game seven against the Warriors with that one,” Young said while chuckling. “He’s a really dynamic player and he’s able to do some great things on the offensive and defensive side.”

The game was neck and neck, but after a big block and two successful free throws by Gentry, Clackamas clinched their first win of February.

“We had our heads down a little bit during the four-game losing streak,” Gentry said. “We knew we were better than that. It just feels good to get out of that slump, and hopefully, we’ll win out.”

The Cougars have made the decision to move Carr from point guard to the two-guard position and have Young bring the ball up for Clackamas. It seems that the change might be what the Cougars need to make a push for the playoffs.

“We want [Carr] running up the court and catching the ball,” Young said. “I’m a natural point guard; I’ve played it all my life. I’m just trying to get everyone involved.”

Young finished with eight points and six assists, Carr scored 27 points and Gentry finished with 16 points. The Cougars got 26 points off the bench led by sophomore post Donovan Tafua with 11 points.

The Cougars are currently 7-5 in league and sit in fourth place. This week, they play Clark on Feb. 21 and Umpqua, who is in third on Feb 24. Both games are on the road.