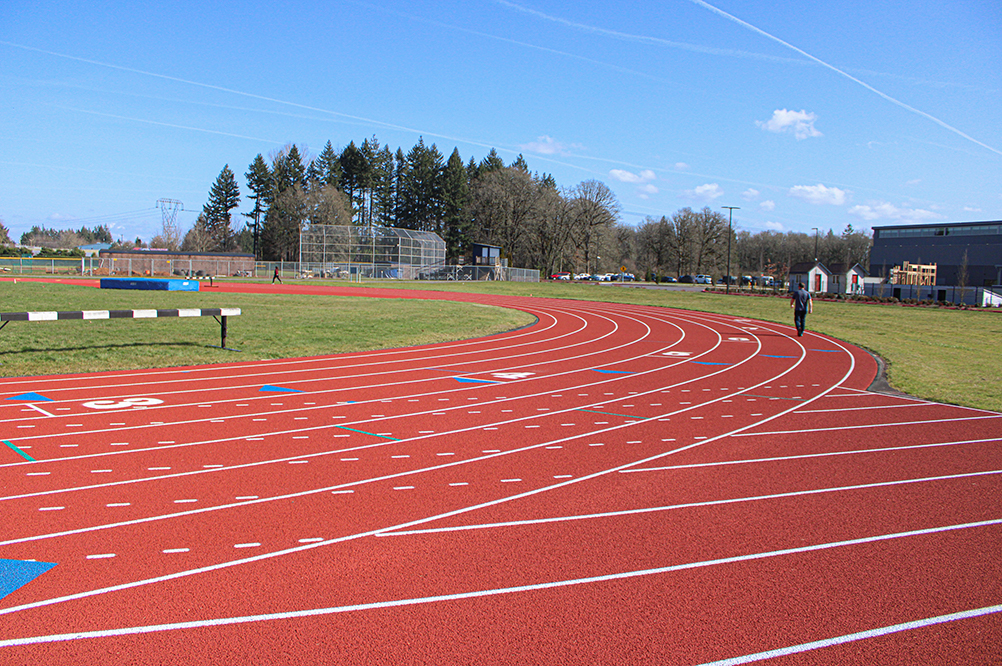 Clackamas track and field has not hosted a home event in 17 years, but that will all change on March 21. Clackamas will be hosting a home track meet at the Oregon City CCC campus,  instead of Oregon City High School. The school decided last spring after weighing its options to renovate the track and support the team.

Jim Martineau, Clackamas athletic director, said via email, “After considering what the budget implications would be to have 50 less full time students (average size of our track team) on campus it was determined an investment should be made.”

Martineau said, “The track has needed some work done on it for years but because of budget concerns and the fact we could go down the street to Oregon City Stadium to host meets, we made it work for a practice facility.”

The track team appreciates the support from the school. Track and field head coach Keoni McHone said, “We are very appreciative and grateful for everything that they’ve done and let them know that. We were hoping that we’d be able to have them here for the first meet, but they get busy lives and everything, so we have a couple of them that are going to be able to see it, but definitely let them know that we’re very grateful for the work that they put in to make it happen.”

The team knows that without the college’s support they wouldn’t be here anymore. Before the renovations, the track surface was uneven and worn down with cracks and holes in most of the lanes. The injury concerns were so high that the team wouldn’t have been able to even practice at Clackamas this season without fixing the track.

Anthony Garcia, sophomore high jumper, said the biggest difference he sees is,  “Definitely the energy. We’ve had a pretty rough track in previous years, but coming out here to this beautiful, beautiful track, everyone’s a lot more up-tempo and everyone has a lot more energy that they’re bringing to practice, so it makes practice a lot more fun.”

To have a meet here for the first time, Garcia said, “It’s really, it’s really great we actually get to host our own meet. We have a brand new track. It’s beautiful, we want to show it off and show other teams what the Clackamas track team is about, so it’ll be really fun. I’m really excited.” Garcia is looking forward to defending his title for high jump last season and hitting even higher marks.

Having a nice looking facility helps with spirit and gives the athletes a home to be proud of. It also helps to have a track that is safe to compete on. McHone said, “To have a nice looking facility gives pride in, you know, being associated with Clackamas and then also it’s nice as far as safety and being able to basically organize this three-ring circus that we call a track practice. Before we’d have a lot of people fighting over lanes one and two, or you know, we couldn’t be over here, we couldn’t be over there. We had to be careful if we were running in these lanes because someone might, you know, sprain an ankle or something.  And so, the safety concerns are well reduced and we’re able to kind of manage all of the event areas that are trying to practice at the same time.”

This is the first season the Cougars will be able to have meets at the track where they put in all the work. To have practices at home, and always be competing somewhere else, was hard.

Sophomore Kiara Anctil, who competes in the heptathlon, said “It’s a little sad, because we put so much blood, sweat and tears into this track, and this is our home. We always kind of had to show out at other places and have family members travel to other places so yeah, it was a little sad.”

McHone said he is most excited, “To see what kind of potential this team has and what they can get out of themselves. We have great team chemistry, and so I’m really excited to see how that’s going to help bring things along for the rest of the season.”

This team has lofty goals, and Anctil said she is looking forward to seeing how the girls and guys do in the multi events. “We have a lot more girls this year doing the heptathlon, and I’d really like to see us get first through fourth place back to back,” she said.

That would be quite the finish to an already historic season.