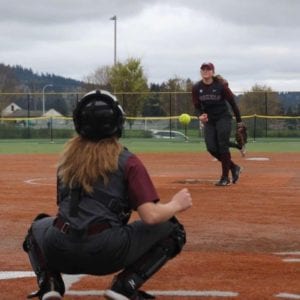 There’s something magical that sports are able to do to a fan — sports have an incredible ability to hold and manipulate an individual’s emotions; they can make you feel deep fear and stress, and in an instant, those emotions can be redirected into overwhelming excitement and joy. When one is engaged and locked into competition, all other things in the world seem to fade. Nothing matters more than that moment and that allows sports to take you through a unique emotional journey as the match, meet or game plays out. When you’re a competitor, however, these emotions are tenfold. It’s truly a special thing to be a part of and that experience is nearly impossible to replicate. For an athlete — when sport and competition are not there — it can be difficult to find that joy and excitement elsewhere.

“I think we’re both kind of bored,” said second-year softball pitcher Sammie Braukmiller as she reflected on her and her sister Maggie’s time away from softball during quarantine.

The sentiment rings true for many of us at this time — particularly the athletes that would be competing at this time in the year, but it’s especially true for the Braukmiller sisters, who would have been competing for an NWAC softball championship this past weekend.

The Cougars were able to compete in six preseason games, winning four of them, before the cancelation of their Inter-Region Tournament and the eventual loss of the season.

“I never expected a game to get canceled,” Sammie said. “I kinda thought it would blow over.”

With the season now over, all that is left are “what if” scenarios for these athletes. In Sammie’s case, there were high expectations for this season after coming off of last year’s performance.

“Last year was a really good learning experience. I was looking forward to seeing how this season would go,” said Samiie. “Our expectations were to win the NWAC tournament.”

For Maggie, there was not only the anticipation of playing at the collegiate level, but also getting to play alongside her sister. “I went to Clackamas to play with my sister. We just know how to work together. I was really excited.”

For these sisters, the business they had on the field will not go unfinished.

“I was planning to go to a four-year,” said Sammie. “I talked to my family. Right now, my plan is to go back to CCC.”

With this pitcher-catcher duo looking to return next season, the question of conditioning and training arises. While at home, it can be very difficult for athletes to not only stay in good physical shape, but it’s been challenging to remain mentally locked-in as well. Especially in a sport like softball, muscle repetition is everything. Fortunately, the Braukmiller sisters have it covered.

“We have a batting cage in our backyard,” Maggie said.

The Braukmiller’s grandparents own OC Sports in Oregon City and along with that comes an at-home batting cage; throughout the quarantine Maggie and Sammie have been able to go in anytime they want to and get real quality hacks and practice to keep them sharp.  Along with this, the coaching staff has been working diligently to accomodate for their athletes at home. “Since we can’t meet as a team I wanted to make sure the team was staying active and mentally strong,” said head coach Jessica Buel via email. “I have posted weight workouts they can do at home, with or without weights. The team is also reading a mental training book and listening to podcasts. This will help them work on the mental side of the game and hopefully help them get through this unknown time.”

Buel also mentioned via email how the team is staying connected during this time, saying “As a team we have a zoom meeting weekly, just to check in and see everyone’s faces. We also communicate a lot through our team text and phone calls. It’s important to stay connected and involved as a team.”

It’s tough to be away from sports at this time for spectators and competitors alike. While at home, have confidence in knowing that our Clackamas athletes are hungry, focused and rearing to get back into the fray. Hopefully soon we’ll be able to gather together and once again witness the magical things that sports are able to do.

This story has been corrected to reflect the store that the Braukmiller’s grandparents own. We originally wrote that her grandparents owned a Dick’s Sporting Goods, but have since edited it to the proper store, OC Sports.