During the first game on Friday Nov. 26, Clackamas faced off against Mt. Hood Community College. CCC was ahead for the entire game, and eventually beat Mt. Hood 81-34.

On Saturday, Clackamas went up against Southwestern Oregon Community College. Southwestern scored first, and the teams had similar scores at the end of the first quarter. From then on Clackamas had the lead and the gap between the two teams widened throughout the game. The final score was 99-53.

During the final game, on Sunday, the Cougars played against Umpqua Community College and won 99-62.

“I thought the energy was really good,” said Skylar Baldonado, a freshman who plays for CCC.

Vitoria Marocci, a player on Umpqua’s team said, “I feel that we can play better.” Jalen Robles, also from Umpqua, said “We can’t win every game, but neither can they.”

Baldonado, who is a guard, said that her goals for the rest of the season are to improve her playing, learn from her teammates, and “Win the championship.” 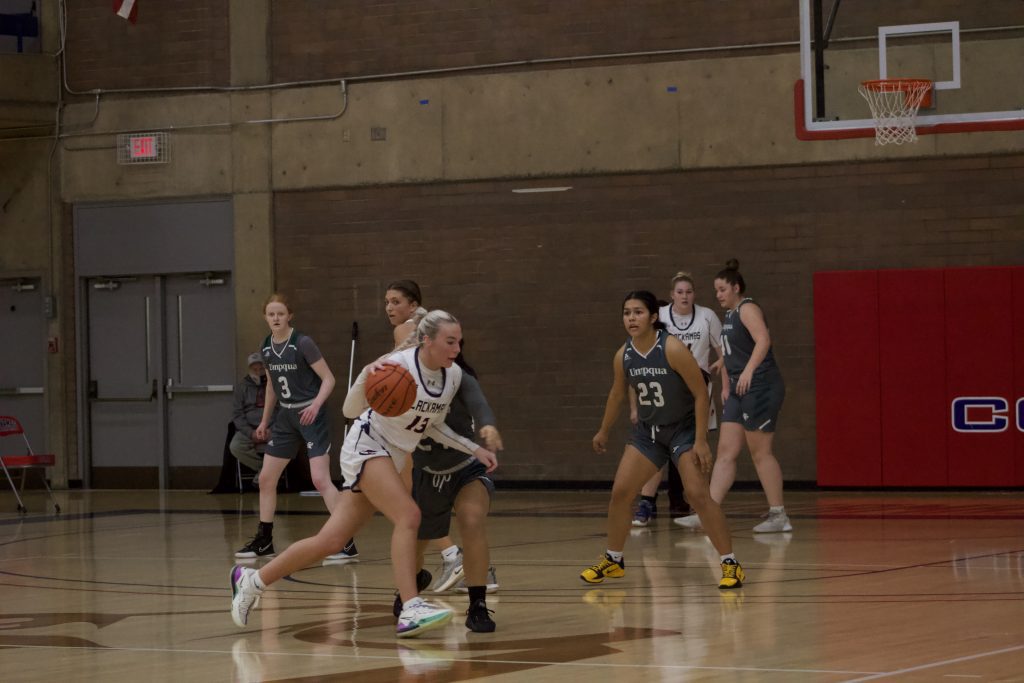 Clackamas won their game against Umpqua Community College with a final score of 99-62. Photo by Madalena Larkins.

Jim Martineau, head women’s basketball coach and athletic director at CCC, said that both the final game and the season as a whole were going well.

“So far, so good. We’ve got a good team,” said Martineau. He said he hopes that the players will improve even more and has high hopes for the rest of the season.

Brooke Bullock and Mia Martineau, both guards, were both named Southern Region MVPs last year, Bullock for the second year in a row. She’s scored 71 points this season, nearly 20% of all points scored by Clackamas. A few other players on CCC’s team also won other regional awards last year.

CCC’s women’s basketball team hasn’t lost yet this season and will face off against Pacific University JV next at CCC on Tuesday Nov. 30 at 6 p.m. Fans are allowed, so long as they remain masked and complete a Google form certifying that they don’t have any symptoms of COVID-19. Games can also be live streamed online on the Northwest Athletic Conference website.

Quinton Paul contributed to this reporting.