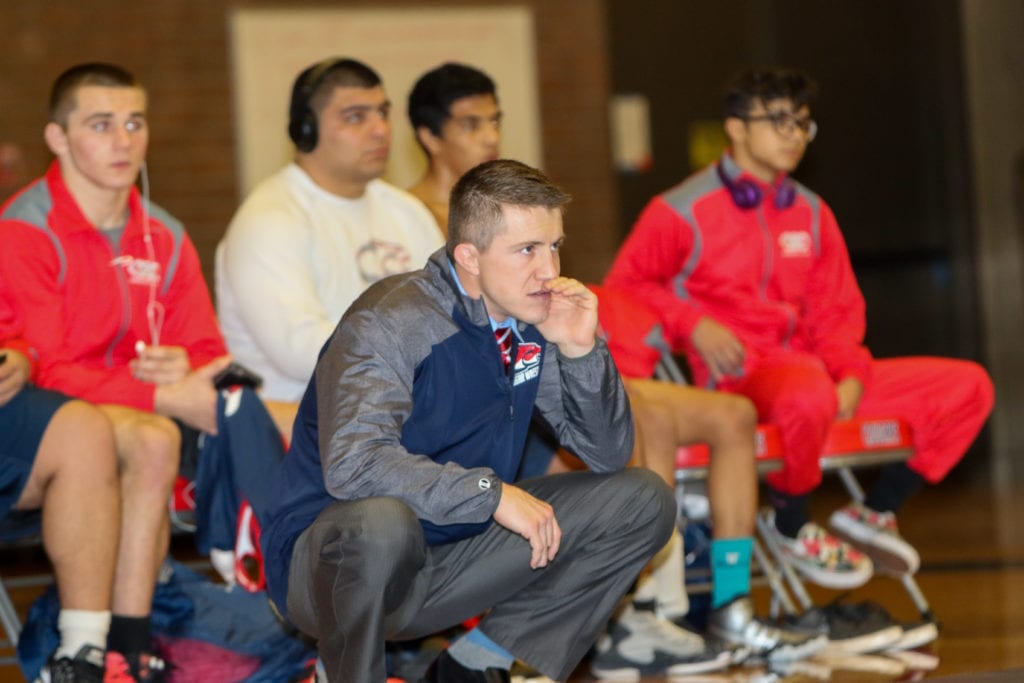 It was 2006 and now Head Coach Josh Rhoden and his wife Keri were living in Redmond, Oregon. Rhoden had just finished his master’s degree and was a long-term substitute teacher for a second grade class. The Rhodens had built a house just six months ago, and Josh was setting up an interview for a full-time fourth grade teaching position. Rhoden had just helped lead Redmond High School to fifth place in the OSAA 4A Wrestling Championships as an assistant. If not for a phone call from Lou Coy, it’s hard to know exactly what Rhoden would be up to today, but after the phone call, Rhoden was on the way to becoming the leader of arguably the nation’s most dominant NJCAA wrestling program in the last decade, whether he knew it or not.

Coy informed Rhoden that Clackamas Community College had an opening for head coach of wrestling after Mike Haluska departed for Portland State. Coy believed that Rhoden should apply for the job and Rhoden had interest, but also had doubt.

“I remember being super nervous because I wanted to coach at this level, but thought I was too young to be hired at 26 and lead a program,” Rhoden said.

Despite the nerves, Rhoden threw his hat in the ring for a chance at the job, which had plenty apply. Rhoden’s first interview was via telephone with the hiring committee and the interview went well enough to earn him an in-person interview with then Athletic Director Jim Jackson.

Rhoden headed to Oregon City from Redmond to meet with Jackson and despite feeling like the interview went great, accepted the fourth-grade teaching job when he returned to Redmond because he was so worried he wouldn’t get the job. But Rhoden’s worries were for not, he soon received a phone call from Jackson asking him if he would like to become the next head coach of Clackamas Wrestling.

“I was scared to death to be honest,” Rhoden said. “We had just built a house. I had been a graduate assistant and a high school assistant, but never had my own team.”

After talking with Keri and praying about it, Rhoden decided he would take the coaching job at Clackamas. But he still needed to inform the elementary principal of his decision and again he was nervous.

“Now I gotta go tell this principal and it’s the most nervous I’ve been because I’m young so it’s like I don’t have a lot of experience telling people ‘sorry,’” Rhoden said. “He was on playground duty. I’ll never forget it. I walk out there and I was like, ‘Hey I really appreciate this opportunity but I have the opportunity to go teach and coach in college over in the valley and coach wrestling nationally and he was like, ‘Man you gotta do it, you gotta do it, I understand. Don’t worry about it.’”

And with that the Rhodens were leaving their new home and headed for Oregon City.

Even though Rhoden didn’t know exactly where to begin, he knew what his vision for the program was and that it would take a lot of work to accomplish the goals he wanted to pursue.

“The vision early on was, ‘Hey I think we can do something really special here,” Rhoden said. “And just the commitment from our staff and the guys that have been a part of what we’ve done from the very beginning is, ‘I think we can be excellent.’”

Rhoden knew what type of program he wanted to build at Clackamas from his own experiences wrestling for different programs, but the young coach found himself behind the competition when it came to program resources.

With a small budget, Rhoden had to figure out what his program could afford right then.

“Little by little you had to pick away at the things that can help right now and the wrestling room wasn’t there,” said Rhoden in his office overlooking the Cougars new mat room. “We needed scholarships because we could go get kids if we had scholarships.”

Former Clackamas dean of students Bill Zuelke and Jackson believed in the value of the wrestling program and helped secure more scholarships for the Cougars.

Before the Cougars ever took the mat under the leadership of Rhoden, he needed to track down the remaining wrestlers from the 2005-2006 team and convince them to stay with the program through the coaching change.

“As soon as I could I got the number of the guys that were here because some of them were like, ‘Eh I don’t know what I’m gonna do,’” Rhoden said. “They hadn’t had a coach for that month and a half and we were just trying to keep those core guys together. We got a chance to talk to four or five of them and we got a couple more on and I think we had 15 guys that first year.”

Out of the 15 wrestlers on the 2006- 2007 team, seven qualified for the national championship and the Cougars finished fifth at nationals — the best finish since 1995.

“It was crazy because there were a lot of tumultuous ups and downs. I’m wrestling and coaching ‘cause I’m young enough at that time. I’m wrestling every day, I’m coaching every day because I’m the assistant, I’m the head coach, I’m everything. It’s come a long way since then,” Rhoden said.

In 2008, Clackamas landed two big time recruits in Brett Sanchez from Clovis High School in California and the No. 1 recruit in the country, heavyweight Tyrell Fortune. With that recruiting class Rhoden felt like he was finally gaining some traction towards his goals and in recruiting.

“[2007] felt pretty good, but then once we got to start a full recruiting cycle with our guys, that were our dudes, that started making all the difference. Where the comfort level became, ‘Hey I can do this.’ When I felt like I was going to make it at this level was probably 08-09.”

The 2008-09 team finished third at the NJCAA National Championships, marking the highest finish for the program since 1987 when Clackamas finished second in the nation. The next year Rhoden redshirted the 2008 recruiting class for the 2010 season and it paid off.

Five years after debuting as head man, Rhoden led CCC to its first Wrestling National Championship since 1971 in 2011 and Rhoden won National Coach of the Year.

“Then it became sustaining it, trying to keep up with the Joneses,” Rhoden said. “Getting to the top is hard, don’t get me wrong, I think it’s harder to stay at the top, there’s no question.”

“I knew all along I wanted to set it apart athletically, but not just that, I was thinking how can we be different academically than [other programs] we’re seeing. These guys aren’t graduating kids, not sending kids on, kids are leaving programs and transferring, so to see all that it was like, ‘Alright we need to be different.’ So, we started doing that and we built a graduation and four-year transfer rate that’s approaching 80 percent. So, our kids leave and move on.”

Sanchez moved on to Cal State Fullerton and Grand Canyon University after being a part of the 2011 National Champion team, but returned to CCC this fall as the Associate Head Coach.

“Out of all the colleges, I attended three, and this college right here was one of my favorites,” Sanchez said. “I liked the environment, I liked being around Rhoden and [Rich] Vigorito, their energy is contagious, it’s just hard not to be around that. Once I graduated from college I had the goals and ambition to become a coach. I started back in San Diego as a high school coach and a club coach, but I always had the goal of becoming a college coach. I was lucky enough to be here with [Rhoden] and Vigorito and it was hard to say no to it. I’m very happy to be up here.”

It’s through hard work that Rhoden, Sanchez and Vigorito have built his program into a national powerhouse.

“My wife will tell you, ‘There’s no 40-hour work week here,’” Rhoden said during a 7 a.m. weight lifting session. “It’s something more like 80 hours. We’ve put a lot of work into it and we’ve gotten some great kids to say yes to coming here and working with us.”

An average day for the CCC program consists of a 6 a.m. practice, 7 a.m. workout, then as the student-athletes head to class, Rhoden and Sanchez head to the office to continue the recruiting of next year’s freshman class, followed by individual sessions for some wrestlers, an afternoon workout, then it’s back to the office for a staff conference call to get the next day’s practice plan squared away and one final check-in with the athletes to make sure their diets are right and they’re working out outside of team work.

“Wrestling for Rhoden is great,” said Joel Romero, one of this year’s recruits. “I’m a freshman right now and it’s really cool. I like him a lot. I didn’t think I was going to be comfortable up here cause I’m from California, but he made me feel comfortable here and I love it.”

Rhoden still can’t believe what his life has become at Clackamas, describing it as “feeling like a movie” sometimes. When he first started, it was all about winning, but as the program has grown he has found himself in the business of molding great men more so than great wrestlers.

“Winning is awesome, but what kind of guys are we building?” Rhoden said. “I don’t want to just teach you a good high-crotch because then I’ve failed you. You’re not going to be a good husband, father, brother, friend or community member. Those types of things early on were just part of the culture we had to have to make better people through wrestling.”

The grind it out, hard working mentality Rhoden instilled in his program has payed off over his tenure. This year is a testament to the program Rhoden has built as Clackamas will be represented in all 10 weight classes at the NJCAA National Championships this weekend in Council Bluffs, Iowa.

Rhoden’s motto when he started at Clackamas was “fake it till you make it.” With a record of 141-35-2, it’s safe to say Rhoden doesn’t have to fake it anymore.