UO vs OSU: where will you choose

Five score and twenty years ago, the Ducks and the Beavers took the field against each other for the first time. This year will be the 118th meeting in one of the most storied rivalries in college football.

I grew up here in Oregon, but my family is from Los Angeles so most of the teams I rooted for were from that area. As I got older,and more into football, I began paying attention to the home state Ducks and Beavers. Eventually, I donned the green and yellow (and white and black and gray and forest green and lime green and pink) and have been a Duck fan since then.

Most Oregonian football fans, from casual to irrational, root for one or the other. You see it all over the CCC parking lots: cars with either a yellow or green “O” on the back or an orange “OS”. It goes beyond football too. A lot of students here at least consider Oregon State or Oregon when thinking of transfer destinations. I myself have and will likely end up at one of those schools next fall. To help make my decision, and hopefully help students torn between the two, I visited both schools for a weekend. 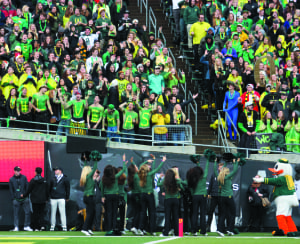 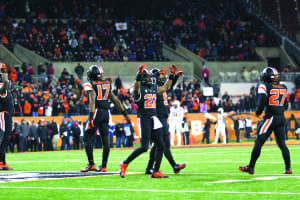 My friend Mitch Buechler, a former CCC student and current OSU student, was nice enough to let me stay with him for the weekend.

We ate breakfast together and simultaneously watched South Park and college football (us youngsters can multitask like that).

Mitch offered take me on a tour of the campus, so we walked around and saw all the buildings. OSU looks like a traditional college campus, and it’s getting new additions. There was a lot of construction; some of it was new class buildings and some was new housing. OSU also has a lot of available space to play sports and hang out. Lastly we stopped by Reser. It’s always funny when I hear a certain stadium is “small”, like Oregon State’s Reser Stadium, because in person they’re massive structures. After the tour we headed over to “Brew BQ” just in time for happy hour. We walked back to the apartment and slipped into food comas as we awaited kickoff. As the sun set, fans made their way to Reser Stadium to set up for tailgating. The parking lot was filled with people grilling and drinking and having a good time. About 30 minutes prior to kickoff, fans filtered into the stands filling the stadium up quickly. The Beaver faithful were out in full force despite being big underdogs and freezing cold.

The Beavers got o to a quick start, taking a 14-3 lead. However, Arizona State answered back with 20 straight points. Some people started to leave, thinking the Sun Devils would run away with it, but those who stayed were rewarded. The Beavers stuck around and made enough plays to pull o the upset of the sixth-ranked Sun Devils. As soon as the clock hit zero, fans stormed the fi eld to celebrate with their team. A buddy of mine who knew I was in Corvallis, texted me saying I better get myself a fake ID. One fellow media member I met told me, “You picked a helluva game to come to.”

After the game ended I opted to stick around Reser, watch the interviews and talk to some fellow sports journalists. Mitch told me his whole night changed based on the game. While hanging out at a friend’s house, he casually checked the score in the fourth quarter and saw the Beavers were winning. They all stopped what they were doing and watched the rest of the game. After the Beavers won, they headed out to a bar to celebrate. People were cheering throughout the night and the bars were energetic. He didn’t make it back home until about two or three in the morning and that was “early.” 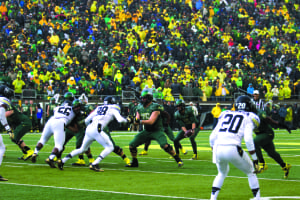 GAMEDAY: U of O

A friend and high school teammate of mine, Jon Kenion, plays defensive line for the Ducks. When he heard that I was visiting the two schools, he offered to host me for the weekend.

We woke up a little before nine and got ready. I drove him to the team facility and people were already at the stadium parking and tailgating. Eugene is different than Corvallis in that the campus is spread out. As I drove by, I realized how far of a trek it must be for some students to get around. I made my way back to the house to eat and kill time. My editor Zak Laster picked me up and we headed to Autzen Stadium around 11.

All the tailgaters filled the stadium, ready to cheer for another Oregon blowout. It was pretty dry leading up to the game, aside from the tears in head coach Mark Helfrich’s eyes. It was senior day, so all the graduating players were honored. The fans cheered as each player was announced and walked out with his family. After the ceremony, the whole team came out to warm up.

As the game started, I quickly discovered the greatest lie – it does in fact rain at Autzen Stadium. The rain stopped after a short period, but the Ducks continued to pour it on Colorado. Zak encouraged me to go on the field in the second half, and he was right. The game was already in hand, but I was still surrounded by loud cheers. The place was electric throughout. Marcus Mariota led the team to a rout of the Buffaloes on what most believe to be his last home game. In fact, Mariota took an honorary snap when he would normally be on the bench. When he walked off the field the entire stadium cheered. Autzen is loud, but this was something
else. There was no field storming at this game, all due respect to Colorado but this win was not worth it. The
storming would happen later.

Back at Jon’s place, the players rested and a lot of people napped in preparation for the night. Another party was on the horizon in Eugene. This one would be a little different than the night before though. Players of age tend to route themselves to “Taylor’s Bar,” a popular bar where wins are celebrated. As for underage players, the night life varies from weekend to weekend depending on which friends are free. However, there always seems to be something to do. 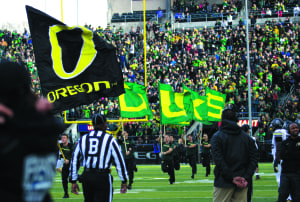 Both towns have a lot of good places to eat, chains or otherwise. When I asked what places are the best or most popular, these are the answers I heard (or visited):

Corvallis:
Brew BQ:
Situated in downtown Corvallis on Madison street, Brew BQ (below) could be easily missed. It’s a small place, hardly any signs for it, but if you find it you’re in luck . Like the name suggests it’s barbecue and beer. I visited during happy hour, which I assume is when most kids go with a college budget. The prices are cheap but the portions are good. There’s tons of sauces to add like “Sweet N’ Stickey” or “Blackberry Bourbon Pepper.” You can easily fill up on appetizers or regular meals, but I strongly suggest the “Hot Mess,” a plate of fries covered in brisket and cheese and barbecue sauce.
Rivas:
Walking distance from campus, Rivas is a Mexican diner that looks like it “teleported to Corvallis from the 90s”, according to Mitch. Like Brew BQ, the portions are good and the price is cheap. However, eating there means you “make a deal with the devil” as another OSU student put it. He elaborated saying that it can be rough on your stomach. Eat at your own risk!

Eugene:
Off the Waffle:
I never got to try for myself, but Jon told me all about this place. Waffles so good you don’t need syrup! They’re like “deep fried,” so if you’re a health nut this might not be the place for you. Like a lot of places in the Northwest, the food can get “weird” with toppings like caramelized onions and pears. However, there’s a lot of normal options too. Jon’s favorite is waffles with eggs and bacon on top. 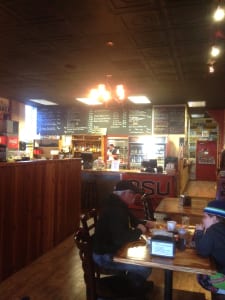 This year’s game is in Corvallis, where the Beavers are 3-3 on the season. The Ducks are undefeated on the road, but a rivalry game in a hostile environment is never a cakewalk. Last year, the Ducks barely escaped at home, 36-35. It’s a battle between first and last in the PAC-12 North division, and the Ducks have won the last six Civil War games.

Oregon Ducks (10-1):
The Ducks have already clinched the North division, and are trying to make the inaugural College Football Playoff. Led by Heisman frontrunner Marcus Mariota, Oregon boasts one of the best offenses in the country. It’s a fast-paced, balanced attack that throws for 300 yards and runs for another 235 per game. The team is third in the nation in scoring, and has won convincingly in every game since the Arizona loss.

Oregon State Beavers (5-6):
The Beavers are last in the North division, and are seeking bowl eligibility. Led by Sean Mannion, Oregon State features an o ense that relies on the passing game. The Beavs are top 25 in passing, but near the bottom in the country in rushing. They allow 30+ points a game, but an upset win over ASU at home two weeks ago has the Beaver faithful in the “Giant Killer” mindset.

You can find out more about transfer requirements, admission and general information at each school’s website.