“Boom Boom Pow” by the Black Eyed Peas was the No. 1 song on the radio in May of 2009 and Clackamas Community College’s baseball team had just broke a 13-year streak of missing the Northwest Athletic Conference (NWAC) playoffs. Since that 2009 season, where the Cougars finished 25-23 overall and 16-14 in league, Clackamas has failed to return to the NWAC playoffs, failing to win at least nine league games in the past six seasons. This season the Cougars did manage to win 11 league games, but missed the playoffs for the ninth straight season.

Finishing with an overall record of 16-26 overall, the Cougars’ season was full of ups and downs, but none changed the direction of the season more drastically than the final 10 games of the season.

“As a team we just need to play fundamental baseball,” freshman third baseman Nathan Loranger said after Clackamas’ 8-4 and 13-2 losses to Lane on April 30. “Catch the ball, throw the ball, hit the ball. Pitchers need to hit their spots, defenders need to help the pitchers out and we need good at-bats.”

A five-game series versus Chemeketa Community College would be the Cougars last chance to straighten the ship and advance to NWAC Cross Regional play.

“We need to get our energy up in the dugout,” sophomore outfielder Tyler Oscarson said on April 30. “We need to dig deeper and grab something from our hearts, because we’re fighting for a playoff spot right now.”

In game one of the series, the Cougars held a commanding 9-1 lead through four innings of play, but Chemeketa came storming back, scoring 10 runs in the bottom of the fifth inning to take the lead 11-9. Clackamas went scoreless in the sixth and seventh innings, while the Storm scored six more runs to extend their lead to 17-9. Clackamas scored a run in the top of the eighth inning, but gave up three in the bottom of the inning, losing 20-10.

“We didn’t play good enough to win,” sophomore outfielder Tyler Parker said at practice following the loss. “It was just a bad game all around.”

Needing to win the next four games to keep their season alive, the atmosphere at practice the day after the 20-10 loss was tense to say the least.

“For us sophomores these could be some of the last baseball games in our lives. It’s literally win or go home for the rest of your life for some of us,” sophomore pitcher Cody Anderson said at Wednesday’s practice.

Game two and three of the series were played at Clackamas Community College on Friday. Freshman pitcher Mason Schimmel started game two on the hill for the Cougars. Throwing three innings, Schimmel gave up three runs on three hits and left the game with Clackamas trailing 3-0.

The Cougars failed to score any runs until the bottom of the seventh inning, when sophomore outfielder Tyler Parker hit a solo home run. The HR was Parker’s eighth of the season, but would be the only run the Cougars scored as they fell in game two 8-1.

The loss put Clackamas in a tough spot for making the playoffs, sitting in sixth place, two games back of Chemeketa and one game back of Clark. Clackamas would need to win the next three games of their series, while needing Southwestern Oregon Community College to beat Clark Community College three times.

Sophomore shortstop Renner Stecki made his fifth start of the season on the mound for Clackamas in game three. Stecki surrendered six earned runs through five innings and received no run support as the offensive woes continued for the Cougars, recording one hit in five innings.

The Cougars made a late offensive surge in the sixth and seventh innings, putting up five runs on seven hits, but it was too little too late, and Chemeketa won 9-5 and snuffed out Clackamas’ playoff hopes.

With two games left but no possibility to extend the season, Clackamas traveled to Salem Saturday for games four and five of the final series of the season.

Clackamas jumped on Chemeketa early, scoring four runs in the top of the first inning on a run battedin single by Parker, a RBI double by sophomore outfielder Grant Horwitz and a two-run RBI double by sophomore first baseman Jacob Kaady. Sophomore second baseman Berry Hunt made his ninth appearance as a pitcher for Clackamas. Hunt struckout three, surrendered 10 hits and five runs, but recorded his fifth win of the season. 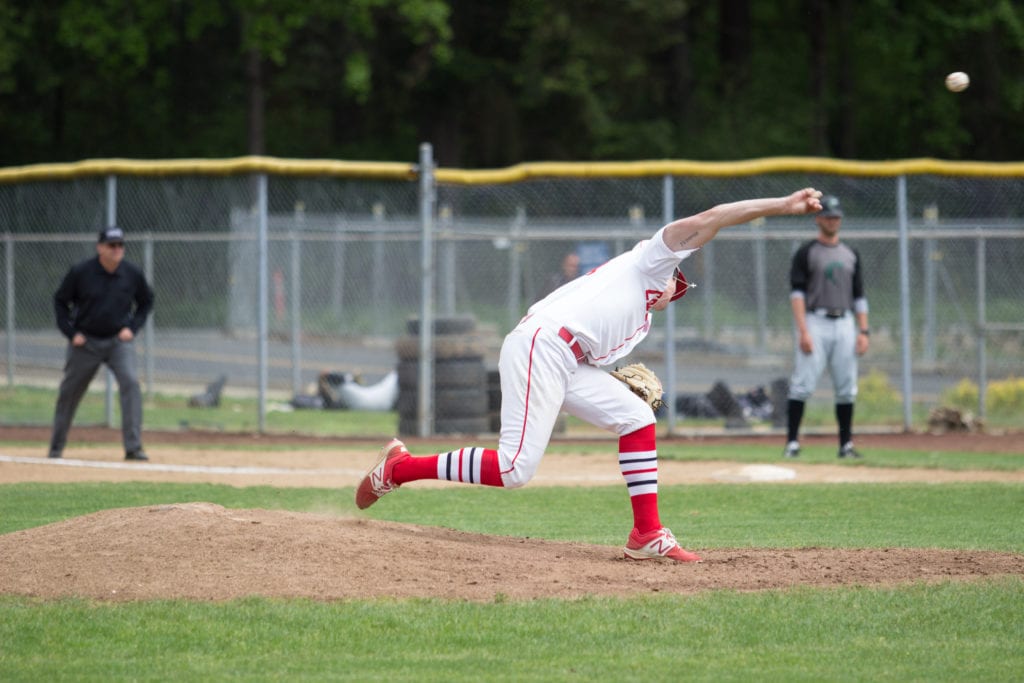 The Cougars added five more runs and would snap their nine-game losing streak with a 9-5 win. Sophomore pitcher Grayson Fenwick would earn his fifth save of the season.

Trailing Chemeketa 8-2 in the final game of the season, Clackamas refused to quit with the help of back-to-back HRs by Parker and Horwitz the Cougars offense outscored Chemeketa 5-0 but fell short  of the complete comeback, losing 7-8.

“It was a rough way to go out,” Horwitz said. “Up until [Friday] we had a shot to make the playoffs and once you make it there, anything can happen. We battled, everybody had us crossed off from the beginning, but we still battled until the last day.”

The goal from day one this season was to make the playoffs to end the streak. Clackamas had a group of sophomores who felt like the program’s culture needed to be turned around, so they focused on making this year’s freshmen class feel welcomed, something they as freshmen felt was lacking.

“It felt like last year the sophomores gave us the cold shoulder,” sophomore catcher Brayden Bafaro said. “This year we took the freshmen in and treated them like our brothers; we wanted it to be one team not freshmen and sophomores.”

Although the chemistry the Cougars worked on this season didn’t result in the necessary wins for a playoff berth, Head Coach Jim Hoppel liked what he saw from this group.

“The sophomore guys changed the ways from last year,” Hoppel said. “They didn’t want to see it happen again so they made sure the freshmen were involved with everything, felt like they were part of the team and everyone worked together.”

Hoppel believes the chemistry the sophomores were able to build will help the program in years to come.

“I think [the chemistry] is going to be big [for the future],” Hoppel said. “I think these freshmen will be the same way as sophomores next year helping the team be one big clique and let the incoming guys know this is how we play the game here, not the old way.”

Clackamas ended the season 11-19 in league and will have a lot to replace this offseason with talented players like leading HR hitters Parker (nine HRs) and Horwitz (six HRs), as well as pitchers Hunt (five wins), Anderson (three wins) and Stecki (two wins).

“It’s going to be hard to replace those [sophomores],” Hoppel said. “We need to go get some freshmen guys to come in, get a lot of innings under their belts and hopefully be winners and do that the year after that and the next year after and hopefully keep doing that.”