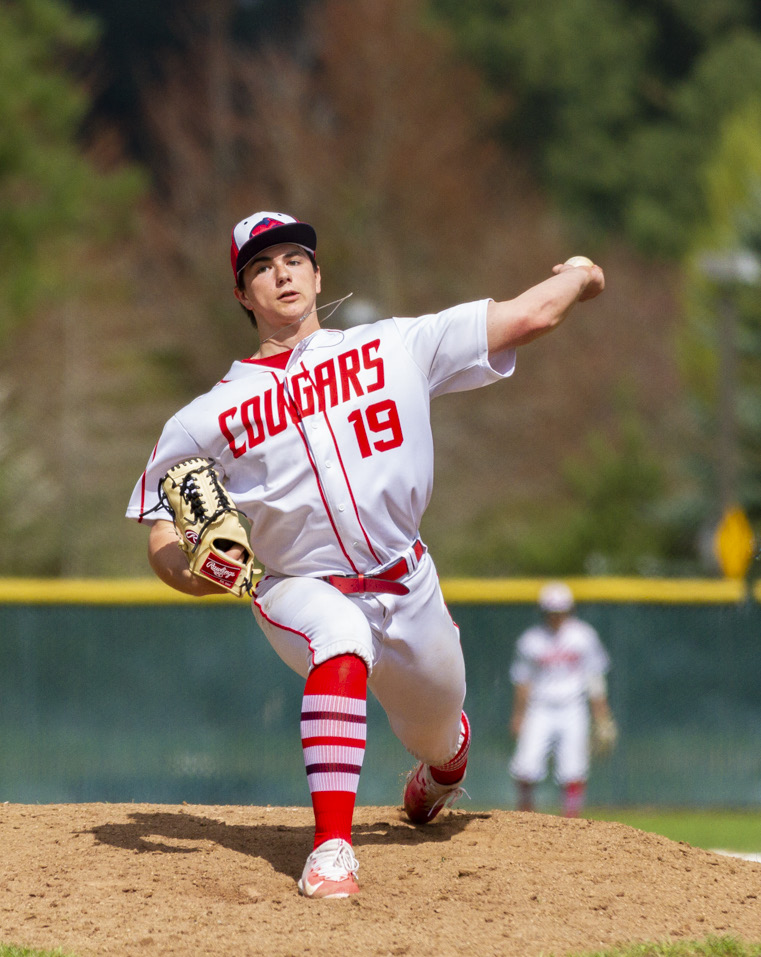 Sophomore pitcher Austin Butenchoe took the mound in relief for Derek Eubanks to start the seventh inning during game one of a four-game series with Chemeketa Community College on April 12.

Eubanks was brilliant, throwing five innings, surrendering one hit and striking out four batters. Despite not allowing an earned run, Eubanks left the game with Chemeketa leading 2-0.

Now it was up to Butenchoe to keep Clackamas close. The first batter Butenchoe singled, the second hit the ball back to him, but he botched the throw and the runner reached first safely.

Freshman pitcher Brandon Cervantes came into the game to relieve Butenchoe. Cervantes hit the first batter he faced and then gave up a grand slam to make it 9-0 Chemeketa. This is the current state of the Clackamas Community College’s baseball team. Clackamas is 3-21 overall this year and after being swept by Lane and Chemeketa are 0-8 in league play. After finishing three games short of the playoffs last year, it seemed Clackamas was making headway towards their goal of ending the program’s playoff draught. Clackamas had high hopes in the off-season for the upcoming season, a very competitive run in the preseason, but now finds itself in the midst of a 15-game losing streak and the hope, if it still exists, is dying one game at a time.

“We have a lot of injuries, some guys that are not eligible right now. We’ve got five or six guys that should be in the lineup right now that aren’t,” Head Coach Jim Hoppel said. “It’s been a struggle. Obviously when you’re not hitting the ball and you’re making the same mistakes over and over again you’re not going to score a lot of runs.”

The Cougars offense has struggled all season, combining for a team batting average of .211. Clackamas has scored a meek 89 runs, which ranks fifth worst in the NWAC, and hit only four home runs. In comparison, last year’s squad had 23 home runs. “We need to have better at bats,” sophomore outfielder Tyler Jewett said. “We are not adjusting to an 0-2 count and I think more people are swinging for themselves rather for the team and that needs to change.”

It doesn’t get much better for Clackamas defensively either. The Cougars have committed 65 errors (second worst in NWAC). Zach Montero thinks the weather could be impacting the Cougars fielding performance. “I think a lot of it has to do with we don’t get a

lot of on-field time because of the rain we’re in the gym a lot,” redshirt catcher freshman Zach Montero said. “We don’t get to see a lot of live grounders and our field isn’t the best quality so it’s hard to judge where balls are going to go.”

Clackamas’ pitching staff has combined for an earned run average of 7.81 and given up 155 earned runs. Sophomore pitcher Joe Cassidy has both of the two wins credited to the staff. Cassidy has 24 strikeouts and an ERA of 3.42. Eubanks has the most strikeouts with 25 and has thrown 31 innings for the Cougars but has a record of 0-4.

“My last two outings were pretty decent, but I kind of got left in too long in my opinion,” Eubanks said. “I kind of just gained some confidence in myself the last couple weeks and I haven’t walked anyone in my last two games so I’m feeling good about that as well.”

Despite the awful start for Clackamas, they sit just four games back from a super-regional bid. But the question is, can the Cougars shake off the bad start and find a way to win? Montero believes the chemistry has to change before the performance can.

“We need to get the family aspect back together, have fun with each other and try to win a couple games at least,” Montero said. “It’s not that easy to stay positive when losing. When you’re in a game for four innings and then it’s gone because of a lack of defense, a lack of pitching and a lack of offense, it’s rough to stay together.”

The Cougars open a four-game series at home versus Southwest Oregon Community College (9- 15, 2-6) Friday at 1 p.m. Hoppel hopes his team can let the tension of the bad season go and just enjoy the game.

“They just gotta play more loose,” Hoppel said. “They just need to play the game like they know how to play. Like they say, ‘it’s a kids’ game’ play it like that.”