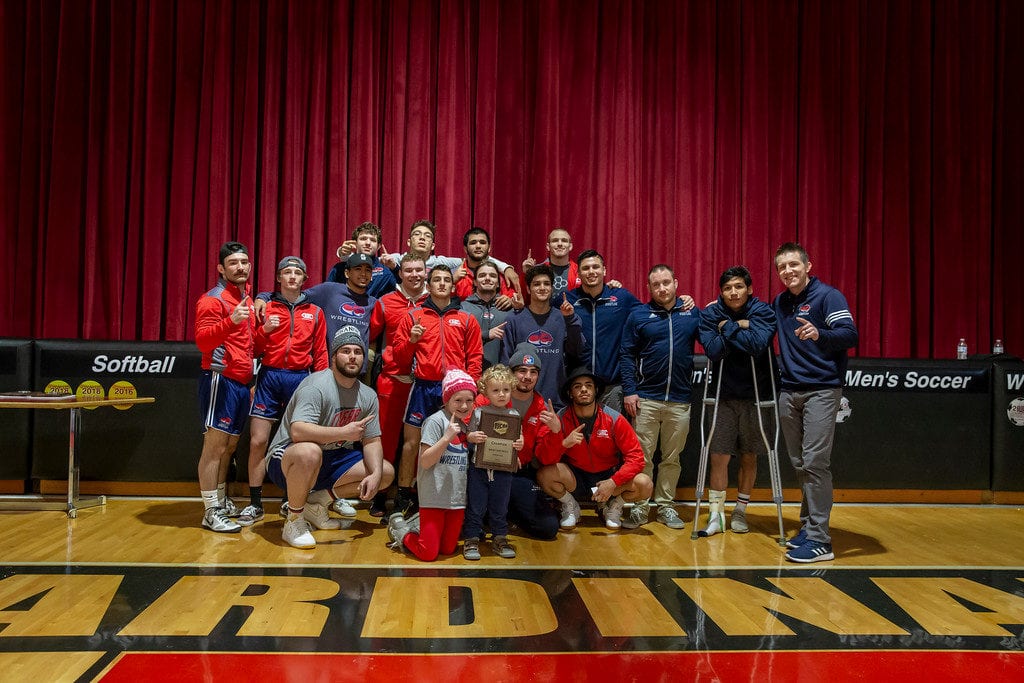 Eight Clackamas wrestlers won individual titles and all 10 of the wrestlers the Cougars took to the district meet qualified for the NJCAA National Championships in Council Bluffs, Iowa.

Head Coach Josh Rhoden had a feeling this year’s district meet could be special for his program. He was hopeful CCC could accomplish something they never had.

“I think we should win the district. I don’t think there’s a question,” said Rhoden the week leading up to the district meet. “I think the fun thing for our guys to talk about is ‘can we get 10 guys into the finals.’ We’ve never done that before.”

This marks the first time Clackamas has had 10 wrestlers qualify for nationals. Freshman Jason Shaner won the 133-pound bracket with a 11-7 decision over Highline Community College’s Shandon Akeo.

Shaner was a bit of a surprise for the Cougars this year and he even surprised himself. When the season first started Shaner didn’t expect to make the starting lineup, but credits his hard work for getting him to where he is now.

“I worked really hard during the season,” Shaner said six days before the district meet. “I never took a day off, never missed a practice and I listened to the coaches’ plan for me and it worked out.”

Rhoden said Shaner has been “rock solid” for the Cougars.

“He’s not afraid of anything,” Rhoden said. “He’s just got that attitude. He’s going to go out there and it don’t matter to him, he’s just ready for a scrap. I’ve been really happy with his effort.”

Mommer has been big for Clackamas all season picking up 27 wins with 24 coming by fall, setting a new school record for falls, according to Rhoden.

149 pound freshman Marty Margolis III and 157 pound freshman Joel Romero both took second in their respective brackets, which qualifies them for nationals as well, with the top three finishers in each bracket getting a guaranteed spot in the national championships.

Romero has only wrestled roughly half a season because of a knee surgery at the beginning of the year, but he has impressed the coaching staff at CCC.

“He’s been lights out,” Rhoden said. “He’s beat the national runner up from last year, he’s beat the No. 3 ranked guy. He should come in this next week as the No. 1 guy in the country he’s been so good.”

Margolis III forfeited the championship match in the 149-pound bracket due to nagging injuries and with the trip to nationals sealed, the coaching staff didn’t see a reason for him to wrestle.

Hurd believes the true turning point for Clackamas this season was the loss to Northeastern Oklahoma that ended the program’s 48 dual winning streak, which was the longest in the NJCAA.

“It was one of the blindest blessings we could have had,” Hurd said. “It woke us up and made us more driven to succeed at nationals. Now we can just go in and do our thing.”

As a team, Clackamas scored 196 points at the district meet and finished 52.5 points ahead of second place, North Idaho Community College, for their sixth straight West District Championship.

“It’s hard to imagine getting a record like that going,” Rhoden said. “It’s kind of a testament to kids believing in what we’re doing and trusting us with their wrestling ability and their future.”

Now the Cougars look ahead to the national championships, kicking it off with a 6 a.m. practice Wednesday. Before the district meet took place Rhoden already had an idea of what the team will need to do in Council Bluffs.

“I’m excited to see where we end up because it feels like we have that kind of team,” Rhoden said. “Northeastern Oklahoma has a very good team and then Northwest Kansas has four international guys that are part of the Mongolian national team and they’re going to be hard to beat. I don’t know if they’ll have the points to get first, but they’re going to help spread the points out either for us or against us and that’s going to be interesting to see how that plays out.”

The NJCAA National Championships run March 1 through March 2. Clackamas will look to capture their first team national championship since 2011.