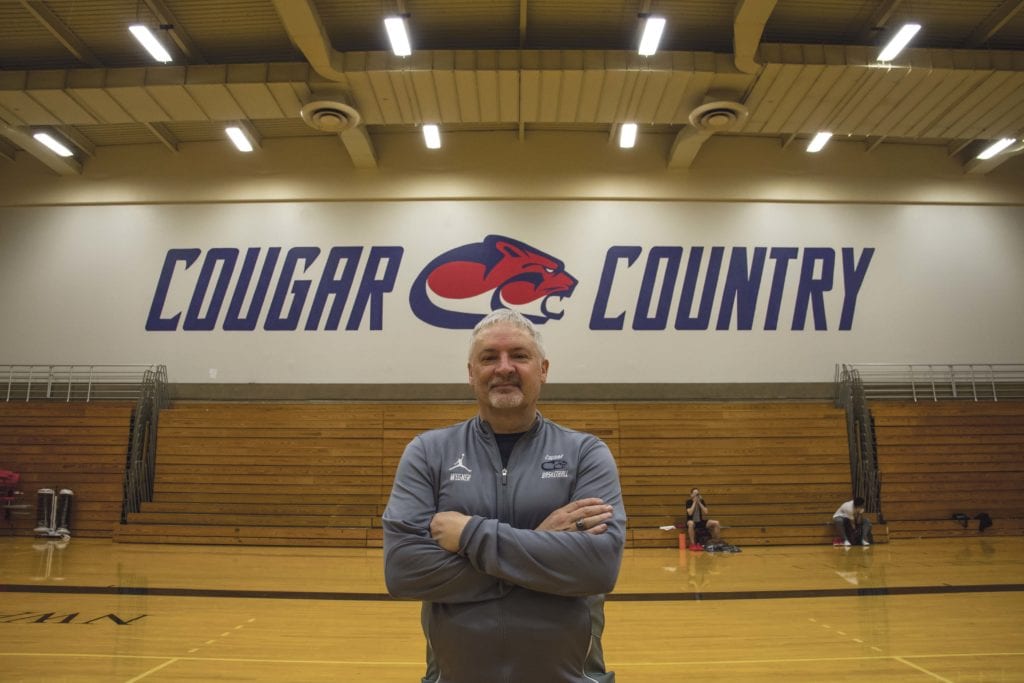 Students of Clackamas Community College may not realize it, but the Cougars’ men’s basketball team is coached by a legendary coach, Clif Wegner.

Wegner has won over 440 games as a junior college basketball coach. Along the way, he has won four NWAC Championships (1994 as an assistant, and 2007, 2009, 2010 as head coach). Wegner has also won seven Southern Region Championships, been named Southern Region Coach of the Year five times (2001, 2003, 2007, 2009, 2011) and been the NWAC Coach of the Year three times (2007, 2009, 2011). He was the first coach to win 20 games at Mt. Hood Community College in almost a decade. Wegner coached at MHCC from 1995-1998, becoming interim head coach in 1997. After his time at MHCC, Wegner returned to CCC to succeed NWAC Hall of Fame coach, Royce Kiser. With all of his success coaching basketball it’s hard to believe Wegner started his life as an underdog, presumed dead by the doctor on the day he was born.

“[The doctor] comes out to the waiting room and tells my dad ‘Mr. Wegner I’m sorry but we haven’t been able to detect a fetal heartbeat for 25 minutes, and we’re afraid that the baby is dead,” said Wegner. “If you believe in prayer, you should probably be praying because your wife [has a 50/50 chance of surviving].”

Shortly after the doctor announced to Wegner. that the baby may be lost, a nurse rushed out of the birthing room to inform the doctor they had a fetal heartbeat.

“The cord was wrapped around my neck,” said Wegner. “My mom said I was colored deep purple, and I looked like a little alien or something.”

On Jan. 16, 1953, Clif Wegner was born to Cliff and Celeste Wegner. Wegner was a Navy World War II Veteran, Celeste D’asaro was the daughter of Italian immigrants. Wegner’s parents met in Inglewood, California after the war was over.

“My mom’s parents, brothers, and sister didn’t like him at first because he was so different than any other boy my Mom had dated before,” said Wegner. “He drank, he smoked, he cussed, he was wild, and he drove fast. He was the opposite of what they had picked out.”

Cliff and Celeste got married soon after meeting, and eventually moved to Westfir, Oregon, a logging town where most of the residents worked in the sawmill, and did not have an excess of income. Kids would spend hours outdoors hunting and fishing or playing whatever sport was in season, said Wegner. It was in that small town where Wegner would eventually fall in love with basketball.

“I was mesmerized by what I watched,” said Wegner. “It was the most beautiful thing watching how the players worked together. I think I fell in love with college basketball in that instance.”

After high school, Wegner attended Western Oregon University, where he played three years of baseball and four years of basketball. Shortly after graduating, Wegner landed his first paid coaching job as head coach of the girl’s basketball team at Willamina High School in 1976.

After his time at Willamina, Wegner moved on to Oregon City High School and turned a perennial loser into a powerhouse. In a three year span, Wegner took the Pioneers from worst to first in the state, but in 1993 Measure 5 passed, and the budget cuts took its toll on the basketball program. Wegner lost all of his assistant coaches, and decided to resign from Oregon City. He was offered an assistant coaching job at CCC.

Now in his forty-second season as a coach, Wegner admits the game of basketball has changed for the better, with the additions of the three-point line and shot clock, but believes the players have mostly stayed the same with a few exceptions. Wegner said he noticed that the players he coaches are seeing more of a disconnect with social interactions in favor of interactions via social media, which he believes is hurting skills like teamsmanship. But as far as basketball skills go, the players are better than the best when he played.

As far as music culture, players agree the coach is falling behind, still listening to Jackson Browne and The Eagles.

“He tries here and there, but he hates our music,” said sophomore guard Briggs Young. “He won’t even listen to it, but then out of nowhere he’ll pull off his own raps; we’ll be out, and he’ll bust a random rap. So it’s pretty funny in that way.”

“Off the court he’s real helpful,” said sophomore guard Nygil Carr. “We always talk about little stuff, like how I’m away from home or if I’m going through some stuff he’s always there to talk me through it. The coaches back in Houston care, but he cares at a different level. Not just about basketball, but about my outside life.”

In 20 seasons at CCC, Wegner is the winningest coach in program history. Associate head coach Brian Stamme believes Wegner is notched for the NWAC Hall of Fame, but Wegner isn’t worried about his legacy right now.

“Right now I’m just enjoying coaching,” said Wegner. “When it’s all said and done, I guess we’ll add up all the wins and losses and see if anyone thinks I deserve that. When you start thinking about things like that I think you’re kind of done. I think when you talk about what you’ve accomplished more than what you want to accomplish this season, I think you’re done.”

Outside of basketball, Wegner enjoys playing guitar and singing at open-mic nights. He still loves camping and fishing and credits his admiration for nature to his childhood in Westfir.