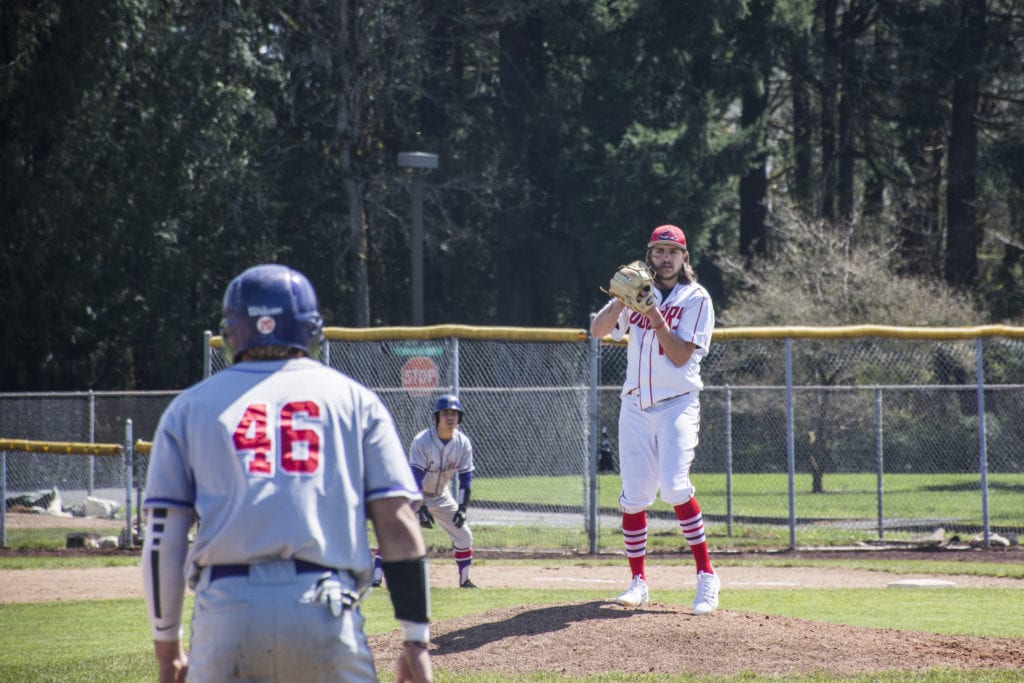 As we move closer to summer and the weather heats up, Cougar’s baseball team looks to do the same.

Clackamas Community College’s baseball team has struggled in this early season, but they have been able to pick up
more wins as the season progresses. The Cougars are 3-9 in league and were able to add three wins to their overall record
against George Fox University JV 1-1 and Linfield college JV 2-0 as a final tune up prior to diving back into league play against Chemeketa Community College.

Clackamas found the winning recipe when hosting the Bruins and Wildcats. The Cougars were able to outscore their opponents 25-12 in those four games, showing that their bats came alive and their pitching kept their opponents shut
down.

Head coach Jim Hoppel was pleased with the response his team made after dropping their first game of the weekend.

“The first one we lost on Friday we did not play very well and I think they kind of realized that they didn’t play well,”
said Hoppel. “I think the last two games against a really good JV team (Linfield) that had a couple of their varsity guys,
we really poured it on in that first game and we won the second game.”

In the final game of the weekend, freshman pitcher and third baseman Renner Stecki was given the nod and threw a complete game. Stecki was only allowed two earned runs and was able to fan eight batters faced.

“It’s the mental side of it. There’s a lot more to it than just physical stuff. It’s understanding how everything works,
what needs to be done,” said Stecki. “I’ve been able to hit my spots well, throwing the right pitches at the right times.
Mainly, I put the ball over the strike zone trying to get them to swing and letting them make mistakes.”

CCC has found scoring from many different batters this year but has relied on freshman right fielder Tyler Parker and his team leading 17 RBIs.

“I’ve changed my approach a little bit whether I’m in the leadoff spot or the 4/5 spot in the middle of the order. I’m just trying to do my job and score runs,” said Parker.

With a freshman-loaded roster, Hoppel believes that at this point in the season, they will find more success as players settle into their roles.

“I think some of the guys are stepping up and earning their starting spots now,” said Hoppel. “We’ve played enough games that we found out which guys are going to be playing more than the other guys. I think they’ll just need to keep their head on their shoulders and keep moving forward.”

Clackamas has been able to find a sweet spot in their game and can attribute it to their success, as Parker states.

“Just pulling every aspect of the game together, we have good pitching, good hitting and good defense,” said Parker.
“We need to keep playing together as a team, when we can string hits together and we’re fired up in the dugout and we’re all just playing well the wins are going to come.”

In their most recent games, the Cougars dropped three of four against Chemeketa finding their lone win in the first game
on Saturday. Clackamas started the game with an explosive eight-run first inning and never looked, back going on to win
14-4. Freshman pitcher Cody Anderson recorded six straight scoreless innings before giving up his first run in the seventh inning. Anderson threw for six and a third innings before his day was over.