Cougars bond on the court 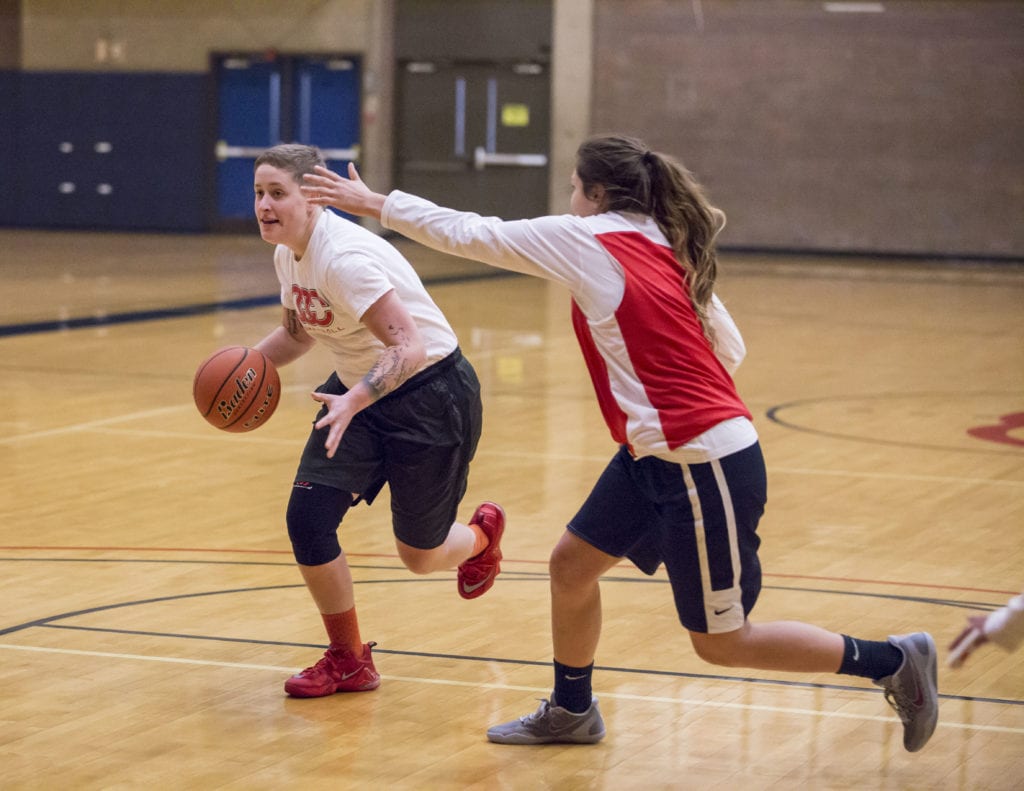 Lexi Pittman drives to the hoop against Rachel Johnny.

It has been 12 years since the lady Cougars have been able to call themselves the queens of the Northwest Athletic Conference. Last year the women’s basketball team went 20-10. They made the playoffs with scoring a team average of 71 points a game, but lost in the regional round against Bellevue College.
The Cougars look to bounce back this season and attempt to make a further run into the playoffs. Head coach and Athletic Director Jim Martineau said he has the same goals as he does each season.
“Position ourselves by the end of region play in February so that we qualify for NWAC championships and are playing well enough to make a deep run in the tournament,” Martineau said.
“I am always excited to watch them grow as individuals and a team,” he said. “It never gets old to see a group of individuals buy in to a common goal and work toward it. We are more athletic than we have been the past couple of seasons. I also think we will shoot the ball well as a group.”
Some of the key returners include sophomore guards Lexi Pittman, Rachel Johnny and Tieranny Marshall-McBride.
Both Pittman and Johnny played in all 30 games last season.
“She’s a good 3-point shooter with ability to play multiple positions,” Martineau said of Pittman. Of Johnny he said, “She’s got an excellent mid-range shot.”
Sophomore guard Marshall-McBride played in 28 of the 30 games last year. Martineau mentioned that Marshall-McBride will compete for playing time at both the wing and point guard positons. She spoke about her chemistry with the team.
“I feel extremely comfortable with my teammates and coaches because they always make me feel like a member of their families,” Marshall-McBride said.
This her second year with the program, and she is ready to embrace her role as a leader on this team.
“As a teammate, I stand as a leader, and [hope] that any girl on the team would be comfortable coming to me about anything from plays all the way to boy issues,” Marshall-McBride said. She is studying for her transfer degree and hopes to eventually obtain her master’s in Homeland Security.
Freshman Kennedy Nofziger is enjoying her new experience playing college basketball, and she commented on her team.
“So far I really love my team and the coaching staff,” Nofziger said. “Overall my experience has been nothing short of positive. I am looking forward to games beginning, and seeing where we will sit in conference.”
The lady Cougars’ first game takes place at home on Nov. 18 at 5 p.m. versus George Fox University in Randall Gym. The first conference home game is Jan. 4 at 5:30 p.m. against Linn-Benton Community College.