Cougars look to bounce back 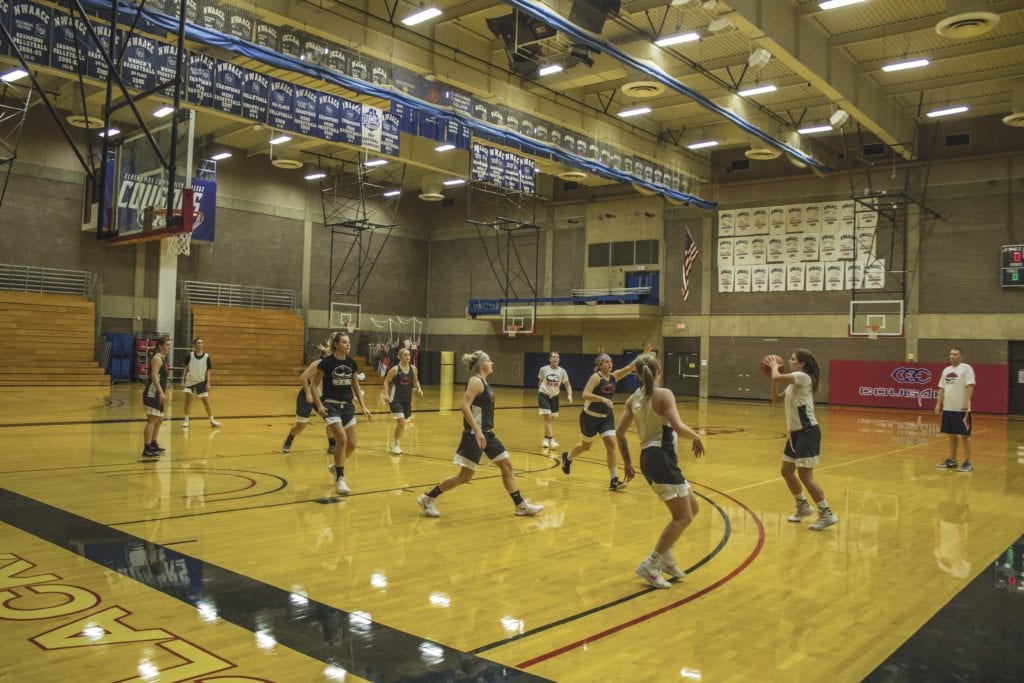 Cougars practice for the upcoming season. Photo by Doug Fry

The Clackamas Community College women’s basketball team looks to keep their program’s winning tradition alive as the 2017-18 season approaches. The Cougars have advanced to the NWAC playoffs 16 out of the last 17 years.

Last season the Cougars finished 17-12 overall and 9-7 in league play, earning them a third-place finish in the South Region and an invitation to the NWAC playoffs, where they were matched up with Walla Walla and lost 74-63.

“The last couple of years have been kind of down for our standards,” said Head Coach Jim Martineau. “It wasn’t a terrible year. We had a couple injuries. I was pretty pleased with our finish. We qualified for the [NWAC] tournament, and got beat by a Walla Walla team in the first round that made it to the [finals].”

“I’m hopeful that it will [go better this year],” said Mock. “It seems like we’re more a team this year, and everyone shares the same goal.”

The Cougars added Kayce Mock’s sister, Ricki Mock, who transferred from Southwestern Oregon Community College to play with her sister. Ricki Mock averaged 6.93ppg, 2apg, 7.97rpg, and1.45spg at SWOCC in 2015-16. Alia Parsons, who averaged 21.4 points, 4.6 steals and 3.9 rebounds her senior season at Silverton High School, transferred from Grand Canyon University to CCC after redshirting her freshman year. Both players should help Clackamas’ offense, which averaged 64.34ppg, and was down from 71.94ppg in 2015-16.

“Our normal expectations are 20, 22, 23 wins, and give ourselves a chance at the end of the year at the tournament,” said Martineau. “The region championship is important to me, but not the overall goal. I want to be playing well come tournament time.”

“The community we have here is awesome,” said Hermosillo-Wright. “I’ve been here three years, and every year the team gels perfect, and we all get along.”

Martineau will be entering his 20th season with Clackamas and his 18th season as head coach. Over his 18 years in the position, the Cougars have averaged 22 wins a season and have only failed to win 20 or more games four times. The Cougars have won seven NWAC South Region championships. Martineau was the head coach when the Cougars captured their first NWAC championship in the 2003-04 season.

“I really like Jim,” said Hermosillo-Wright. “He makes it fun, and we get stuff done, which is definitely a nice change from high school.”

The Cougars open their season on Nov. 18 against Centralia Community College (18-11 overall, 11-3 in the West Region last season).