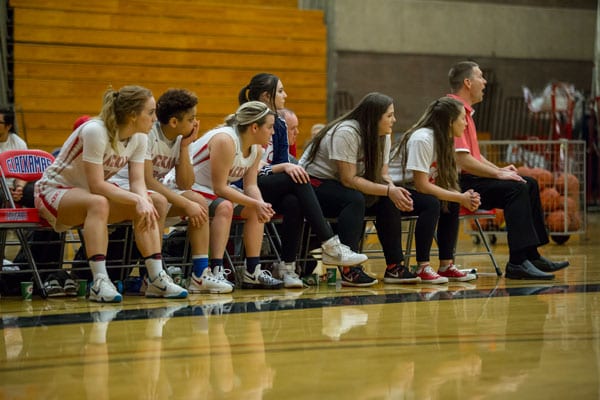 Photo by Austin Boltz: The players and staff watch from the sideline. The bench players have been crucial this season because of the dwindling roster.

With the season coming to an end, the Clackamas women’s basketball team eyes the NWAC tournament and a top three finish in league.

After an 8-4 preseason record, the Cougars started league play in rough fashion. A 0-3 start to league caused by dwindling roster numbers and offensive woes led to a 1-4 record through their first five games. Head coach Jim Martineau, in his 19th year at Clackamas, knew there was no cause for concern.

“It’s abnormal to start 0-3, said Martineau. “I’ve been here 19 years and we’ve never started league 0-3 and definitely never started 1-4 so that’s unusual. It’s just a different way of going about your business and I think all along we knew we had a chance.”

“It’s been tough, it’s been really tough. The games are a lot longer than in high school, so being a starter you have to play a lot of minutes,” Krammerer said. “We’ve dealt with it really well. A lot of players have stepped up to fill roles that they were not necessarily expecting to be in.”

Fellow freshman shooting guard, Kennedy Nofziger added how the team has had to change to combat the adversity of their roster numbers.

“We have to work hard and use our time wisely,” said Nofziger. “We can’t get in foul trouble and we have to just play smart.”

Even in losses, the team kept their positivity and hard work about them. When they weren’t lighting up the scoreboard, the Cougars have been able to shut down opposing teams.

“We defended well, but wound up losing four of the first five,” Martineau said. “Offensively it was just a struggle, we couldn’t score. This is one of our best defensive teams we’ve had. That keeps us in a lot of games. Like the Clark game where it ended 47-39, we defended well enough that 47 points wins that game.”

The Cougars have been able to turn around their record in league at 6-4 and plan to have a strong finish by taking advantage of a favorable second half schedule and settling their offense.

“We have a big advantage at home. A lot of us were really pumped about that,” Nofziger said. “I think we can get pretty far if we just work hard and continue to improve every day, but right now we’re just going game by game.”

“The long road trips are over. We play Chemeketa twice; I think it’s in our favor,” Martineau said. “9-7 makes the playoffs in our league. We have to finish in the top four and I think 9-7 definitely does that. I think we’re in pretty good shape.”

Krammerer believes the work they have done to fix their early struggles will help them finish strong.

“I have a lot of faith in us,” she said. “Going from the beginning season and our slow start and not being fast or fluent on offense. We have picked up a lot on defense and on offense I think we can go really far.”

With eyes on clinching a playoff spot and punching their ticket to the Northwest Athletic Conference Championships, Martineau believes the Cougars have as good of a shot as anyone to capture the title.

“Lower Columbia was ranked No. 1 for a while and they beat Umpqua,” Martineau said. “We beat Lower Columbia in the preseason. Walla Walla has been ranked in the top four all year long and we beat them in overtime.”

The team will look to end their season with big wins and plan to make the NWAC Championships taking place March 9-12 at Everett Community College. The Cougars currently hold third place in the South Region and will need a top four finish to qualify for the tournament.