With only 16 miles separating the Clackamas Cougars and the Mt. Hood Saints, a buzz surrounds this rivalry game. However, don’t let the short distance fool you; with the game approaching Jan. 28, the bad blood between the schools runs much deeper than geography.

“Cage the Cougar,” is a phrase CCC assistant coach Brian Stamme came across several times at the MHCC campus for their home games against the Cougars. Before his current position at CCC he spent six seasons at Lane Community College as an assistant coach. Even from Eugene he knew of the rivalry between the Cougars and the Saints.

The Cougars need to be ready for a MHCC team seeking revenge for how their season ended last year. If you missed any of the action, there was a virtual five-way tie in the league with only two games left in the season. The Saints came in 11-0 and a win at CCC would assure them a spot in the NWAC tournament. What they got was a crushing overtime defeat, including a stolen inbound pass and layup to seal the deal for the Cougars. MHCC would finish tied for fourth in the Southern League and miss the NWAC tournament altogether.

Clif Wegner, currently in his 15th season as the Cougars’ head coach, had a brief stint as the MHCC head coach before taking the whistle here at CCC. It doesn’t hurt that he’s had the chance to play MHCC twice a year for the past 15 years, six of those against current MHCC head coach Geoff Gibor.

“They tend to be a very post-oriented, low post attack team,” Wegner said. “Coach Gibor was a low post player himself. We know their stuff, they know our stuff. There aren’t a lot of surprises.”

After watching the first league home game against defending NWAC tournament champions, Portland Community College Panthers, it looks like CCC has a solid answer to MHCC and Gibor’s scheme. Vince Boumann, a 6’8” freshman center, took over in the second half to secure a victory for the Cougars, 95-70. Boumann put up a double-double with 15 points and 11 rebounds, and made his presence felt in the low post against a much weaker and smaller PCC team.

“It’s almost too easy when he gets it around the rim,” Wegner said of his emerging big man. “He’s pretty much an automatic double-double even if he only plays 20 minutes.”

“It’s excitement and anticipation,” said
assistant coach Paul Fiskum, talking about making it through the Southern league. And that starts with winning a big rivalry game.

With the Southern league owning five of the last eight NWAC tournament championships, CCC is not a team to be taken lightly and this is the kind of game that can really push a team into a good position to make a tournament run.

Make sure to come out Jan. 28 to cheer on your Cougars to victory in the Randall hall gym, and you never know, you might just see the red superfan and his impressive acrobatics in the stands. 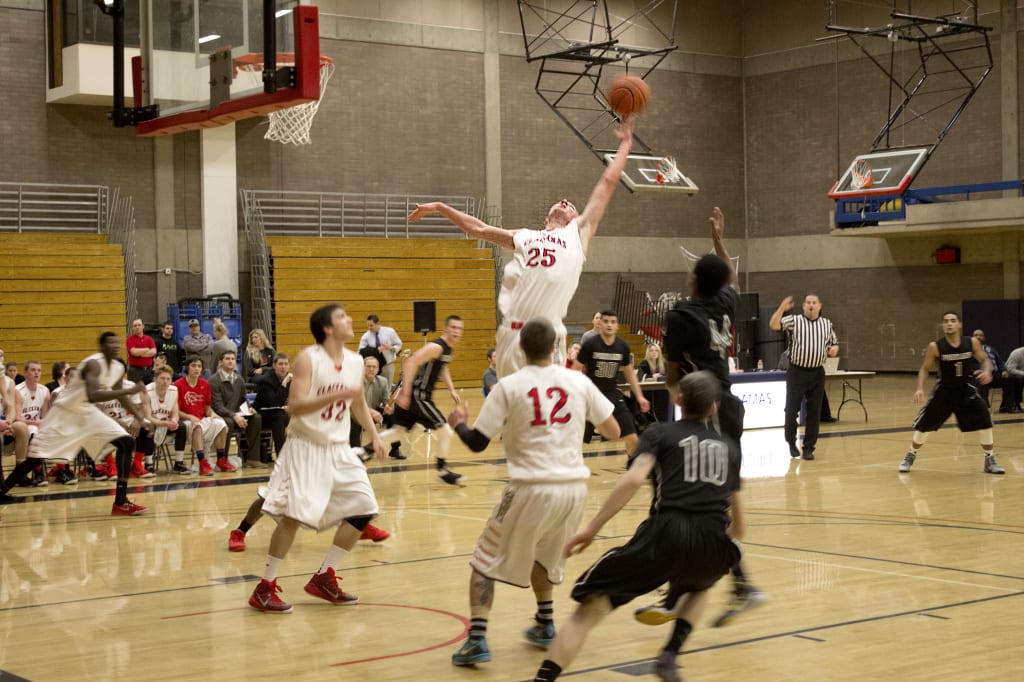