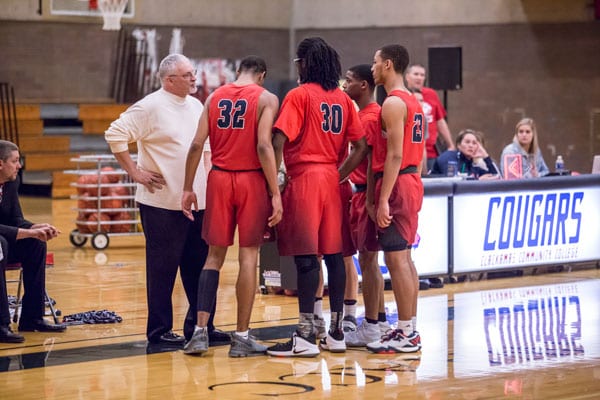 Inside room 201 in Randall Hall, the Clackamas Community College men’s basketball team celebrated their 89-83 win over the Highline Community College Thunderbirds in a game that had eight ties and eight lead changes throughout.
From outside the room, fans heard the Cougars end their meeting with a break on, “Family.”
“We want to be treated like family, and family means there is a certain amount of privacy,” said Head Coach Clif Wegner. “You don’t share family business outside of the family. You treat family special. Family is there for you no matter what.”
The players feel the family mentality too. Sophomore point guard Elroi Butler commented on the win.
“It just shows us what we can do,” Butler said. “If we keep playing together as a family we can get far and do great things.”
An early timeout refocused and regrouped the Cougars, propelling them to a 14-point lead, the biggest lead of the night.
The second half was close throughout, with six total lead changes. The Cougars weathered the storm as the Thunderbirds showed they weren’t giving in easily.
“Teamwork, teamwork, teamwork,” said sophomore forward Ryun Gibson. “We passed the ball and moved the ball, got shooters open and got players open.”

The crowd showed up to cheer on the Cougars.
“Our bench was crazy,” said Butler. “I think people in the neighborhood even heard our fans tonight.”
In the second half, when Clackamas struggled to find any offense, Butler was able to keep them going. He finished with just six points, but he found his shot when the team needed him most, including a go-ahead three late in the second half.
“I’m always thinking about the team first,” said Butler. “That’s something that the team needed. I wouldn’t have been able to do that on my own. They actually motivated me. Everybody inspired me to do that.”
Freshman guard Briggs Young also contributed, shooting 3 out of 5 from behind the arc, including his game-sealing dagger.
“Briggs Young, he hit a couple big ones and of course the big, big shot at the end was Briggs from the baseline that put us up for good,” Wegner said.
The coaching staff is happy with the win, and Wegner believes that they became a better team.
“When they walked up that hallway tonight after the game, they were a different group than when they walked down the hallway before the game,” Wegner said.
The Cougars continue their season next weekend at the Pierce tournament in Lakewood, Wash. They will open their Southern Region League play at home on Jan. 4 at 7:30 p.m. against Linn-Benton Community College.

The Clackamas women’s basketball team defeated George Fox University Bruins JV with a final score of 91-57 in their first game of the season on Friday, Nov. 18.
The Cougars took control from the opening tip. They pushed the pace early, and played full-court tight pressure defense that clearly bothered the Bruins.
“This is the pace we want to play,” said sophomore Tierrany Marshall-McBride. “We want to get other teams out of their comfort zones and have them play at our pace. It’s the only way you are going to win the game.”
The Cougars used their size advantage all game, forcing the ball down low to get good shots in the paint.
On the defensive side, Clackamas forced the Bruins into a lot of turnovers with their aggressive style and taking away the passing lanes. The Bruins had a hard time getting good shots and getting the ball up the court.
At the half, Clackamas led 51-30 over the Bruins. Marshall-McBride chipped in 10 first-half points and freshman Kayce Mock added 18.
The Cougars’ aggressive mentality on both offense and defense continued into the second half as they determined to get the ball to Mock, shoot open three-pointers and to not let the Bruins get comfortable on offense. 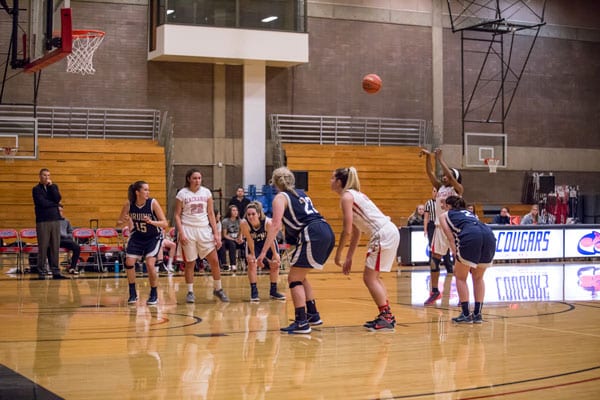 In her first game with the Cougars, Mock didn’t look or play like a freshman out there Friday night. She was the biggest player on the court, using her height advantage to be a defensive anchor, a low post threat and even stepping behind the arch for a couple of threes. Mock finished the game with a double-double, leading the Cougars in points and rebounds.
The Cougars’ Head Coach and Athletic Director Jim Martineau was happy with the team’s win and their aggressive style.
“I think we have to play that way to win,” Martineau said. “It’s a more enjoyable style to play and watch. We have the athletes to keep it up.”
The Cougars will look to build on this strong first season victory, when they play again in the Thanksgiving Invitational this Friday through Sunday, Nov. 25-27, which will take place at Clackamas Community College starting at 5 p.m.