For the second year in a row the Clackamas Cougars softball team was eliminated by the Mt. Hood Saints in the NWAC Championship tournament.
The Cougars ended the season on a hot streak, winning 10 of their last 11 games, en route to capturing the South Region title. The strong finish and region crown earned the team the No. 2 seed in the tournament, where they had high expectations.

“We have that desire every year, so it’s a tradition at Clackamas,” said head coach Jessica Buel. “We have won the most championships in the history of the NWAC, so that’s our every year, that’s what we’re planning on.”

In the team’s first two games, they certainly seemed ready to live up to that tradition.

On the first day of the tournament Clackamas squared off against the No. 15 seed Everett Trojans. Both teams started off slow, until the Cougars erupted for five runs in the fourth-inning lead by a bases-clearing triple from Cassie Cruz. Cougar pitching kept the Trojans in check on their way to a 7-0 victory.

“The first game we had a lot of jitters but after that we were just kind of on a mission,” said third baseman Kylie Gonzales.

The mission continued later that day as they were paired up against the No. 10 seed Bellevue Bulldogs. Clackamas jumped out to a big lead thanks to a combined seven runs in the third and fourth inning. Bellevue rallied late scoring four runs in the seventh, but it wasn’t enough to overcome the deficit as Clackamas held on 8-6.

Day two started out similar to day one, with Clackamas controlling their game against Douglas. The Cougar defense, led by pitcher Cassidy Edwards, dominated the game allowing just five hits and zero runs. The Cougar offense had another one-inning eruption with four runs in the third, which proved to be insurmountable in the 6-0 win.

“I mean our pitching staff is killing it, everybody on the field is hitting, there’s hardly any errors,” said Gonzales. “Everybody’s doing their job together and that’s what makes us unstoppable.”

Edwards shutout each opponent in her first two starts of the tournament, as well as earning a save in the game against Bellevue. Most pitchers have to take days off, but Edwards was ready to go for each game at whatever position.

“I couldn’t have done it without my team,” said Edwards. “Obviously we played two pretty good teams that I pitched, and the other team that we played I played center, but I mean everyone’s here, it’s like a whole different ball game. They come and nobody wants to lose so everybody’s giving it all they got. I have to [say] hands down to my defense, couldn’t do it without them.”

Unfortunately, the roll the team was on ended on the third day of the tournament.

In the semi-finals, Clackamas faced off against the No. 1 seed Spokane Sasquatch. Fielding errors, pitching struggles and poor hitting did the Cougars in. Edwards was subbed out early in the game for pitcher Emily Marchbanks, but the change wasn’t enough to spark a comeback as Spokane won 4-1.

However, the tournament was double-elimination so the Cougars still had a chance to make the championship. They would just have to find a way to get back to their style of play.

“[We have to] just be confident at the plate, get up early in the game and score some, get back in our groove,” said Marchbanks.

With elimination staring them in the face, Clackamas would have to go head to head with their archrival, Mt. Hood. The game would be a rematch of last year’s championship.

The two foes split the regular season series 2-2, and the postseason matchup was just as intense. The Saints jumped out to an early 5-1 lead, but the Cougars clawed their way back into the game narrowing the margin to just one run. But the rally stopped there as the Cougars just couldn’t find the gaps.

“I thought we were going to do it,” said catcher Kandace Furlong. “I felt the momentum and I thought we had it in us, but we were just hitting balls right to people. We had some good hits just a little too shallow. Honestly we were just hitting right to people and that was a big problem; obviously you can’t get any base runners if they’re catching the ball every single time. They just kind of had the edge today and we didn’t.”

The Saints celebrated right in front of the Cougar fans after eliminating their rivals for the second straight year.

“It blows to get third and it blows to lose to them,” said Furlong.

Despite the bitter loss, players were still proud of the team’s accomplishment, especially given their thoughts on the team early in the season.

“Well we definitely improved as a team tremendously,” said Furlong. “I mean I was unsure if we were going to make it at the beginning, it was pretty rocky, but I’m surprised by this team. It sucks that we got third place but honestly, I’m proud of this team.”

Many of the girls were visibly upset after their season came to a close. For some, it was the end of their career as a Cougar. Despite the heartbreak, the players still felt a fondness for the team.

“This team is so awesome,” said Culp. “This is one of my favorite teams I’ve ever played on, so it’s really sad that it has to come to an end, but they’re awesome.”

Edwards shared a similar sentiment saying, “I love the group of girls that I played with and I guess I wouldn’t change a thing as bad as it is right now,” said Edwards. “We should hold our heads high, be proud of ourselves and I am proud of the team. We came a long way.” 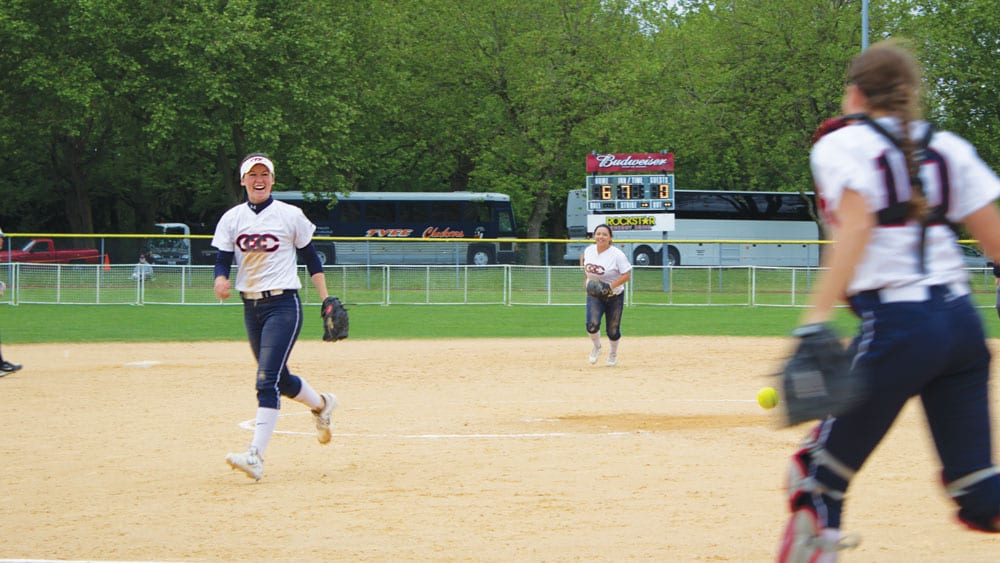 Story and photos by: Blake Thomason and Jack Spencer