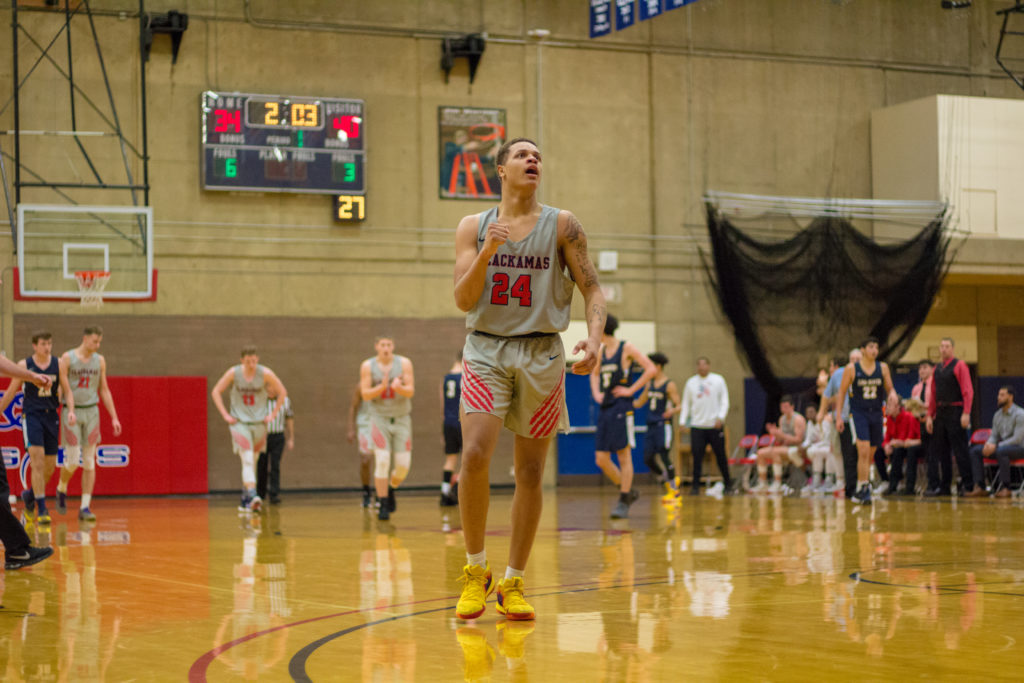 After a hot start to the season in non-conference play, 10-2, Clackamas Community College’s men’s basketball team has lost three of their last four games and now sits in fifth place in the south conference with a league record of 3-4.

Clackamas took on first place Lane Community College (16-2, 5-1) on Saturday. The Cougars looked primed to upset the No.1 team as they took a 15 point lead to the locker room after the first half, leading 55-40. Freshman post Matt O’Brien led the Cougars in scoring with 17 points, freshman guard Clay Sullivan added 12 points and Robert Ford added 11. Clackamas was shooting 48.7 percent from the field and went a perfect 9-9 atthe charity stripe.

“We got off to a great start,” said Head Coach Clif Wegner. “We played a very, very good first half. In the second half we got into serious foul trouble.”

Clackamas had 12 team fouls in the first half and three of their starters had two fouls a piece.

Despite the foul trouble, the Cougars extended their lead to 17 with a three-pointer from freshman wing Tariq Harris with 13:02 left to play. Clackamas led 70-53, but over the next five minutes Lane outscored the Cougars 20-6 and pulled back into the game 73-76.

Clackamas wasn’t able to stay out of foul trouble in the second half as sophomore wing Adam Gherig, Harris and freshman post Mathias Nchekwube all fouled out of the game.

“We’ve had a lot of foul trouble,” Harris said. “I’ve taken myself out of plenty games that I feel like if I was in, I could have made a big impact and we could’ve won.”

Ford hit a three with 8:10 remaining in the contest to make it 79-73, but the momentum was going Lane’s way. “They started pressing us and we turned it over way too much,” Wegner said. “That was really the difference in the ball game. We turned it over and it lead to some of their easy shots.”

Baskets were traded for the next three minutes, but a three by Lane’s Tashon Brown narrowed Clackamas’ lead to 93-90. A turnover by Ford and a layup by Brown made it 93-92 with 3:48 remaining.

Clackamas’ Jamie Stull made a layup with 40 seconds remaining, but the Titans answered with a three to tie things at 99-99 with 20 seconds left. Stull had a layup blocked by Brown with six seconds remaining. The Cougars called a timeout to draw up the last play.

“We had another chance to inbound it and we were trying to get the ball to Clay [Sullivan],” Wegner said. “A kid kind of came through him over his back and it looked like a foul to me, but they gave them the ball and a chance with two seconds to go.”

Lane attempted a full-court pass for a shot to win it, the ball was knocked away in the crowd, but Stull was called for a personal foul that sent Lane’s Lucas Wilson to the free throw line for a chance to win the game. Wilson missed the first, but hit the second giving Lane a 100-99 lead with less than two seconds left.

Sullivan missed a desperation three and Lane was victorious.

“At first we were pretty down [about the loss,]” sophomore post Elliot Hesse said. “When Coach [Wegner] talked, he assured us that our effort was there. It wasn’t our effort that lost us the game. We did almost everything in our control to fight back against some poor calls there at the end.”

The win would have been big for the Cougars in the fight for a playoff berth, but with more than half of the league schedule still to be played, the Cougars are going back to the drawing board to figure out what they need to do to get back to the postseason.

“Our philosophy is come out and fight like we did last game,” Ford said. “We could go out and play hard and get that top spot. We have all the pieces, we just have to put them together.”