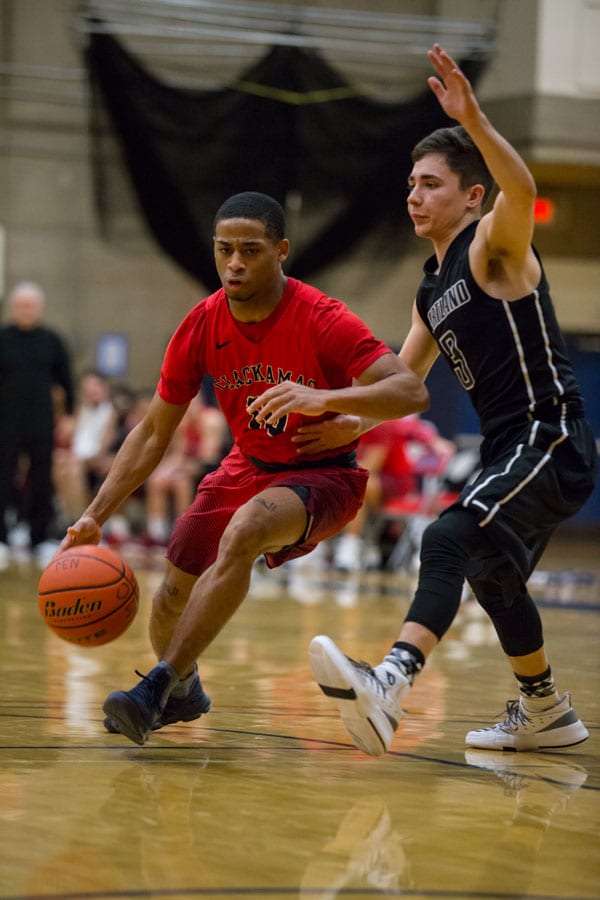 Nygil Carr drives past a Portland Community College defender. The Cougars would eventually win the Jan. 28 home game with a score of 96-85.

Since the 1999-2000 season, the Clackamas men’s basketball team has found themselves among the 16 teams that qualified for the NWAC tournament. But this year, the team is in unfamiliar territory, unsure if they’ll make the tournament.

With only seven games left before the postseason, the team is sitting just above .500 and at the middle of the pack in the Southern Region of the NWAC conference.

Head coach Clif Wegner has stated that the this is one of the youngest teams that he has ever coached in his 19-year tenure at the college. When Wegner was asked how the season has gone so far this year he described it like this.

“It’s been ups and downs, peaks and valleys,” Wegner said.

Clackamas has lost a total of nine games this season with five of those losses being by five points or less. Three of those have been in the Southern Region games.

Wegner mentioned that some poor play has contributed to the team’s record. In a game against Clark College, where they lost by three points, the team had to use five timeouts in the first half just to stay in the game and give themselves a chance to tie with a desperate shot at the buzzer.

Clackamas freshman guard, Briggs Young, added that when they were growing up, a lot of them had been playing against each other, and it’s taking some time to adjust to playing together.

“It’s been alright. It’s been up and down, really rocky and were still trying to find our spot and find a way to play together,” Young said. “It’s been difficult.”

Wegner brought up that it’s a matter of doing everything a bit better and playing harder, with intensity and understanding, such as has been the tradition of Clackamas men’s basketball in the past.

“Understanding that winning is the most important thing right now,” Stringer said. “At a community college, it can be tough at times because people want to get to the next level, and sometimes that goes in front of winning. Some people put their individual goals in front of the team goals.”

Stringer said that if he can step into his role that the coaches have given him, it will help lead the team to some wins and help extend the postseason run for another season.

Stringer looks at Clackamas’s streak as motivation to keep it going.

“It definitely would suck to be the team that ended that streak,” Stringer said. “Just understanding that there is more at stake than just individual goals, and we are actually a part of something bigger than ourselves.”

Young likes the team’s chances of making it into the NWAC tournament.

“The league is so wide open that anything can happen,” Young said. There’s quadruple ties for last in league right now, and it can go any way.”

With the team on the cusp of ending Clackamas’s streak or continuing it for another season, it will depend on the way that the team plays down the home stretch.

The team currently sits in a two-way tie for the fourth spot in the Southern Region. After a 92-83 win on Feb. 4 at Chemeketa Community College, the Cougars now have a three-game winning streak. Their next game will be at home against Southwest Oregon Community College on Feb. 11 at 4 p.m., where they will look to avenge a 4-point loss earlier this season versus the Lakers.