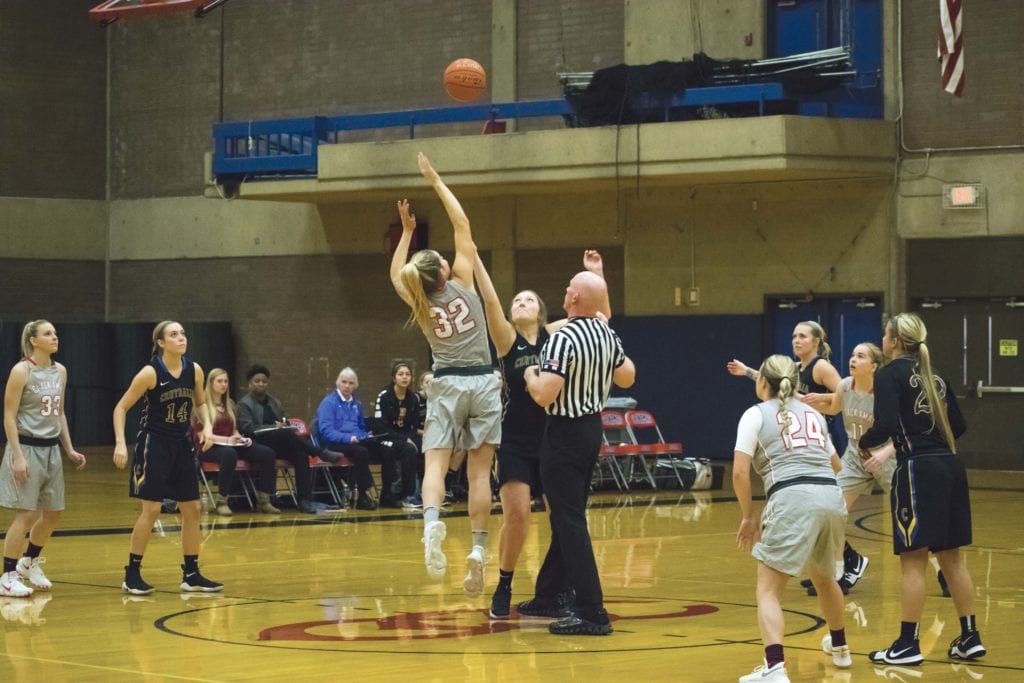 The Clackamas Community College women’s basketball team started the season off with a bang, defeating the Centralia College Trailblazers 75-64 on Nov. 18.

The game was the first in two years for both sophomore guard Nicole Hermosillo-Wright, who red-shirted during the 2016-17 season, and sophomore guard Ricki Mock who transferred to CCC after playing for Southwestern Oregon Community College in 2015-16.

Even after a year off, Hermosillo-Wright and Mock both started for the Cougars along with sophomore guard Brittany McCormick, sophomore guard Kennedy Nofziger and sophomore forward Kayce Mock. The small lineup seemed to help the Cougars run the fast-paced offense Head Coach Jim Martineau lives by.

“That’s been us since I started coaching here,” said Martineau. “We shoot our share of [three-pointers]. We shot 43, probably a couple too many, but I have no problem shooting 35 to 40 [three-pointers] a night. We don’t have a ton of size and they’re running zone so that’s what they’re giving us.”

Hermosillo-Wright came out with the hot-hand from behind the arc right from the opening tip, hitting three consecutive 3-point shots to give the Cougars early command of the game.

“It felt so good after taking a whole year off,” said Hermosillo-Wright. “To come back the way I did, I’m just really proud of myself and the team really came through too. It was a real team effort.”

With the help of Hermosillo-Wright’s great start shooting, Clackamas was able to lead the entire first quarter, and put up 32 points to Centralia’s 22.

“Anytime somebody comes out like that, it kind of lights the fire for the whole game,” said Kayce Mock. “To start off a quarter with 32 points, you can’t really beat that.”

Both teams struggled to keep the fast pace in the second quarter, and shots weren’t falling quite as frequently, but Clackamas was still able to outscore the Trailblazers 11-10.

“I think we need to improve on getting ourselves slowed down,” said Ricki Mock. “When we try to get ahead of ourselves that’s when we start to get into a little bit of trouble. If we slow ourselves down we should do pretty well.”

The Cougars went into half-time leading 43-32, and finished the half shooting 16 for 43 from the field (37.2 field goal percentage), nine for 28 from beyond the three-point line (32.1 fg%), and two for three from the charity stripe. Centralia shot 13 for 33 from the field (39.4 fg%), four for 10 from three-point territory, and two for four at the free throw line, but never were able to take the lead away from Clackamas, a fact that would stay true the entire night.

“We need to keep the game at our pace,” said Kayce Mock. “We need to play our game, and not the other team’s game.”

In the third quarter the Trailblazers continued to push the ball down low to their posts, and it started to wear down Clackamas’ defense, and it was the only quarter in which Centralia outscored CCC 21-17. The score after three was CCC 60-53.

“Defensively we could improve a little bit on stopping their posts from scoring,” said Hermosillo-Wright. “We have a struggle with height, but we did a good job on defense side, other than with the posts.”

The fourth quarter was a back-and-forth fight to the finish. Centralia had some success bringing a full-court press against the Cougars offense, but with superb ball handling from guard Brittany McCormick that made the defenders trying to stop her look like they were on roller-skates, Clackamas was able to escape the press, and preserve the win.

“I was just trying to run out the clock,” said McCormick. “I thought I should pass it up before I turned it over, but no one was open.”

“It’s a good win,” said Martineau. “That’s a really good team. They’ll win 23 or 24 games and finish first or second over [in their division]. I’m just super happy for [Hermosillo-Wright]. She’s been waiting a year to do this.”

Hermosillo-Wright led the Cougars in scoring, finishing with 25 points on 10 for 23 shooting. McCormick added 17 going six for 12 from the field, and Kayce Mock added 15 points and 10 rebounds to record her first double-double of the season.

Clackamas’ next games will be a part of the Thanksgiving Tournament they are hosting. They will match up against Southwestern Oregon Community College at 1 p.m. on Nov. 24 at Clackamas Community College.