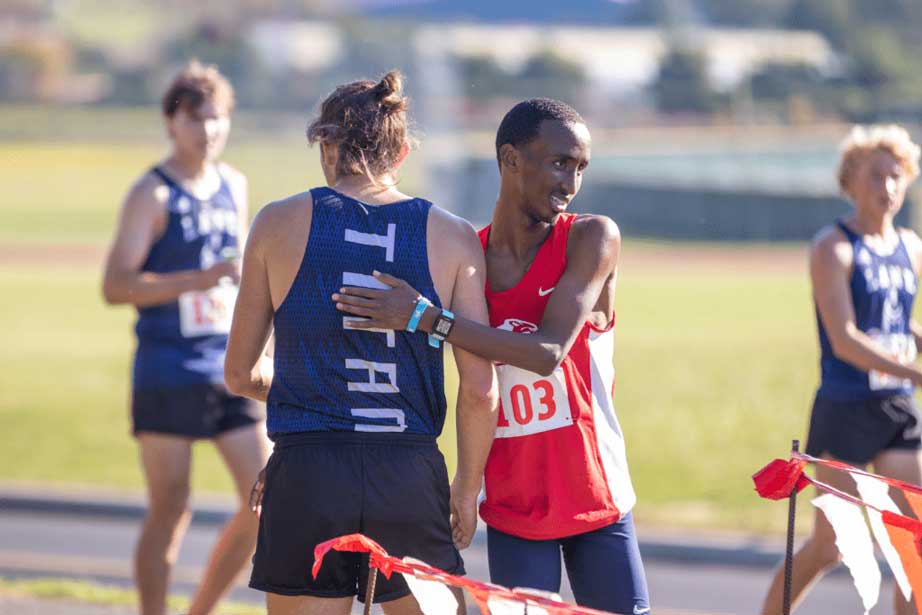 Clackamas Community College hosted the NWAC Southern Region Cross Country Championships this past weekend as the Cougars battled a season plagued with injuries.

The meet featured the eight teams within the NWAC Southern Region, with the women running a 5 km race and the men running an 8 km race around the Randall Cross Country Loop.

For the Cougars, winning the meet was out of the question, as their runners were outnumbered by other teams and they were struggling to even keep their team in the races due to injuries, but the team was still seeking to improve individual performances.

For the men, freshman Abdi Ibrahim had been one of the fastest runners in not only the NWAC, but also the state, and that didn’t change Saturday.

The men raced first, starting near the Yellow 3 parking lot and doing a short loop around the open park area on the North side of campus before beginning three larger 2.5 km loops.

Ibrahim started off quick, behind a few Lane Community College runners, but eventually took the lead by the time they got around to start the first main loop. It didn’t take long for Ibrahim to stretch his lead from the rest of the pack, as he began to pull away from everyone about halfway through. He eventually cruised through the finish first with a time of 25:33.2 — about 26 seconds ahead of Lane Community College athletes Daniel Beckstead and Anthony Stone.

“I’ve raced with those guys before, so I knew what to do and how to go out,” Ibrahim said. “I felt pretty good halfway through, so I just picked it up.”

Despite what looked like an impressive race, Ibrahim said he didn’t beat his personal best time.

“The race was okay, I’ll say. I didn’t get a PR or a good time,” he said. “It’s difficult being by yourself, nobody’s pushing you and you don’t really know how fast you’re going.”

As for the women, the Cougars struggled all season to score any points, with just four women on the roster.

The women’s race started an hour after the men began their race, running around the 2.5 km loop twice.

Lane Community College, which has a talented roster for both men and women, had runners claim the first seven spots, earning a perfect score of 15.

Freshman Reilly Treacy led the way for the Cougars, battling with an illness and foot injury to finish with a time of 21:43.

“Health-wise, I wasn’t 100 percent, and I hurt myself last meet, so it was not a good formula at all,” Treacy said.

“It was good to have my team back,” Treacy said, “because I know the last two meets we haven’t had the entire team due to injuries and all that.”

The injuries to the team had been a storyline for the Cougars. Head coach Michelle Rose said nearly every runner on the team has been injured in some way, and was pleased with how the team competed on Saturday in the face of adversity.

“We did pretty good,” Rose said. “We’ve been struggling with a lot of injuries, and we’ve battled back from that.”

As for the season as a whole, Rose says the team has done well. “They’ve stuck together well, and have tried to battle through the injuries together,” Rose said. “I’ve seen some good performances from some of them, even with battling injuries.”

Lane Community College won by earning the lowest score overall between both men and women, scoring 23 and 15 respectively. The Cougars scored 100 points overall on the men’s side, with the women finishing too far back to score any points in their race.

The Cougars will wrap up their season on Nov. 18 at Saint Martin’s University for the NWAC Championships, where they have the opportunity to finish the season healthy and strong.