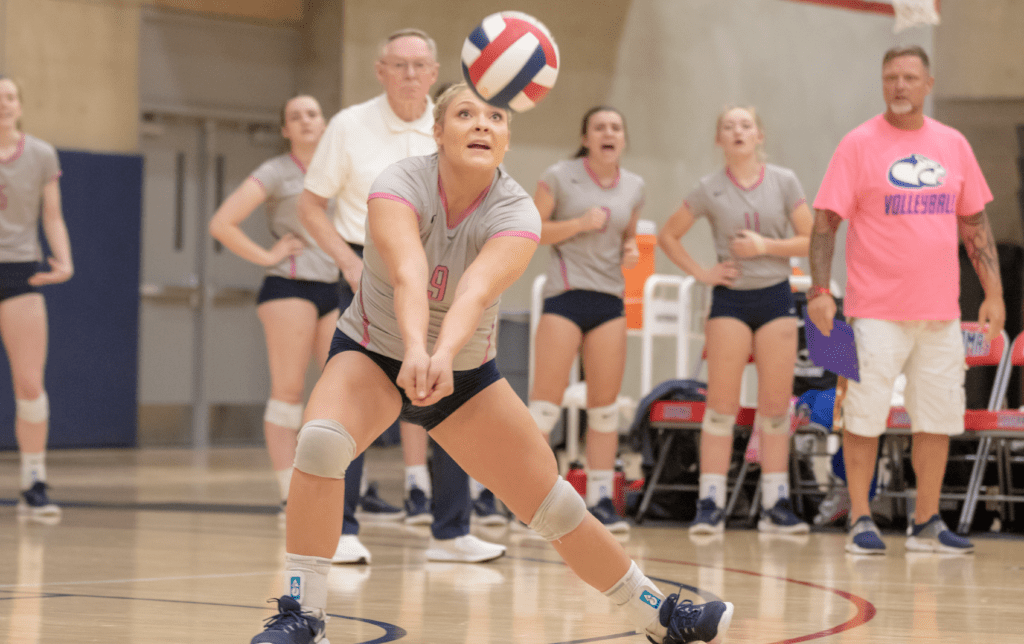 Fans flooded Randall Hall last Friday night to cheer on the Clackamas Community College Cougars volleyball team against the visiting Lane Community College Titans for their annual Dig Pink game. Dressed in pink hair ties and jerseys, teams such as Clackamas Volleyball and others across the country host Dig Pink nights with some of the proceeds going to the Breast Cancer Awareness Foundation to help fund the fight against breast cancer.

Madison McBee, sophomore middle blocker, said that Dig Pink is, “really important because being able to support breast cancer awareness is really important, not only for me, but for everyone because everyone is affected by it.”

This night is paramount for many people, including players such as sophomore middle blocker Olivia Tyson, who sadly lost her grandmother to breast cancer, and sophomore setter/hitter Jahlett Talalemotu-Tofu, whose aunt passed as well.

Talalemotu-Tofu said, “It’s a really important game for me. I have friends in the volleyball community that also have breast cancer, it’s just that it has a bigger meaning to me when I play on the court. It’s just something about this night that makes me want to come out and focus and be stronger.”

“This night in particular means a lot to me,” Tyson said. “It’s just all about women’s health, people with breasts health, just making sure that they feel supported, because I think a lot of times women’s health issues go underfunded and under researched, and so I think having a night specific to making those proceeds go to something for a women’s cause is really important.”

The team struggled for a win against No. 2-ranked Lane in the South Region, walking away with one set 25-23 and losing the following 3 sets for a loss of 3-1. There is a lot of room for this team to improve and that starts with confidence and not playing so much as individuals, like they were at the start of the season, but more as a team, the players explained.

“We have a really good team. We just need to learn how to bring out individual skills on the court and be as one unit and that’s what I feel like we should work on,” Talalemotu-Tofu said when asked what the team wanted to work on over the rest of the season.

Going  forward, the team confidently said that they can compete with any team. Lane is one of the best teams in the conference and they competed against them and can build off this loss. “I think it proves that we can compete with the teams that are not quite on Lane’s level,” said Tyson.

The Cougars have just two games remaining at home this season — one against Mt. Hood on Wednesday Oct. 30 and Wednesday Nov. 6 against Linn-Benton. They play this weekend on the road vs. Rogue on Friday Oct. 25 and Southwest Oregon on Saturday Oct. 26.