May 2, 2015 might go down as one of the most historic days in sports history: there was the NFL Draft, the Kentucky Derby, NHL and NBA playoffs and a legendary fight between Manny Pacquiao and Floyd Mayweather. But none of those could top what happened in the Washington Square Embassy Suites.

“I wouldn’t miss this for the world,” said Davey Evans, who wrestled for Jackson from 1992-93 at CCC.

Throughout the ceremony, friends, family, former wrestlers and colleagues of Jackson were on their phones checking the score of the Spurs-Clippers game or seeing who was winning the Mayweather-Pacquiao fight. But when Jackson was called up, all eyes were on him.

“I guess I fooled everyone,” joked Jackson. “All the things I get credit for I didn’t do alone. I stole from other coaches and peers.”

Evans also remembered Jackson’s hard work, explaining how Jackson would ride his bike from Northeast Portland all the way out to CCC everyday. Jackson’s dedication and commitment likely comes from his military days.

Jackson graduated from the Naval Academy in 1973 and coached the U.S. Marine and Military teams for five years. Those teams included four Olympians and two world champions.

“When you think of Olympic basketball, you think of Mike Krzyzewski,” said Rhoden. “If you had to compare [Jackson] to someone, it’d be the guy who coached Krzyzewski at West Point. That’s where he is in our sport. He’s on another level.”

It’s not just on the mat where Jackson affected people, though. Travis Bonneau, a teammate of Evans at CCC from 1992-93, credited Jackson with impacting his life.

“He was very encouraging,” said Bonneau. “He was really a positive, uplifting guy.”

Bonneau is currently an artist, and after the ceremony he presented Jackson with a painting as a gift. The same man who they showed flipping opponents over his head gushed about how “beautiful” the art was.

While Jackson is no longer at CCC, where he spent six years coaching and seven years as AD, his impact is still felt in the athletics programs.

“People always ask me, ‘What’s your legacy now that you’re not at Clackamas?'” said Jackson. “I tell them Clackamas still is my legacy. I hired five of the coaches there now and a sixth is no longer coaching, but still a faculty member.”

Although Jackson was gracious and humble about his induction, the former and current CCC wrestling members agreed he belongs in the hall.

“It’s way overdue, he definitely deserves it,” said Rhoden. “Anytime you see a guy working that hard get honored like this, you know it’s right.” 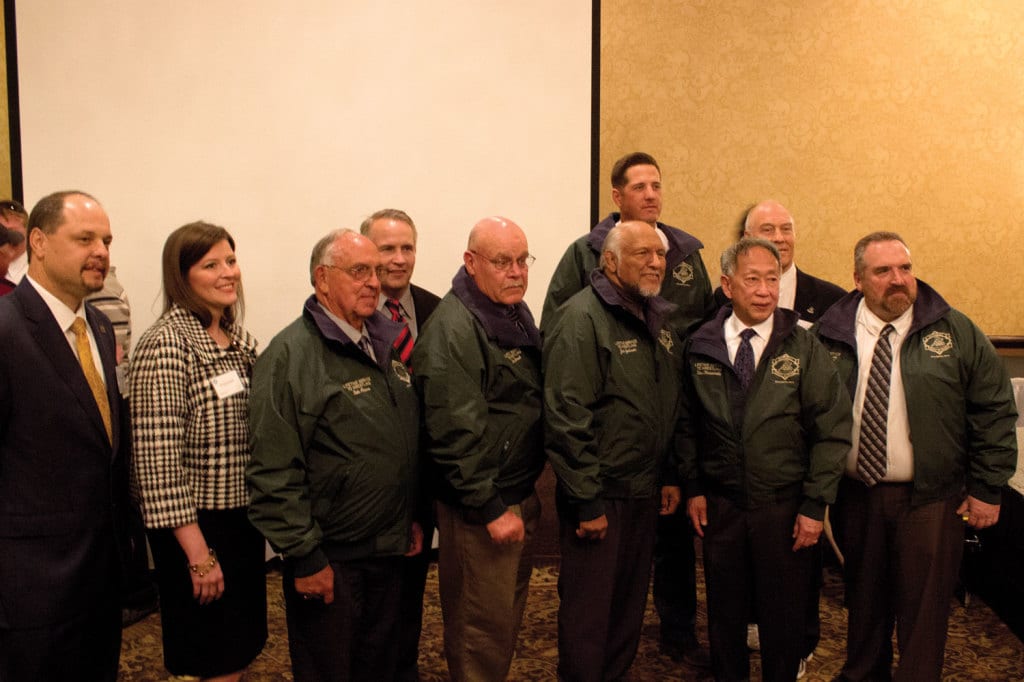 Jim Jackson, front row and third from the right, poses with the other Oregon National Wrestling Hall of Fame inductees for 2015. After lettering at the US Naval Academy, Jackson was a head coach of the US Marine and Military teams, Clear Creek high school in Iowa and Clackamas Community College before transitioning to athletic director at CCC. Jackson also officiated wrestling for 18 years. He currently serves as the compliance manager for the NWAC.

Story and photo by: Blake Thomason