From Marine to murderball 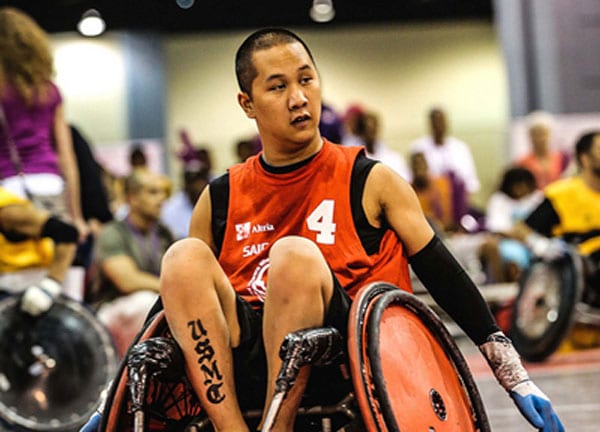 Clackamas student Tim Vixay is highly competitive in a game he likes to play, known as murderball. It is similar to rugby; however, every player is in a wheelchair. Vixay started playing in 2008 after he had completed rehabilitation for a neck and spinal cord injury that left him paralyzed. The injury occurred when he dove into a wave while he was in the Marines.
The Print talked with Vixay to learn more about him and gain an understanding of the game.

The Clackamas Print: What are your plans while here at Clackamas?
Tim Vixay: I finished my transfer degree back in 2008…and am now back here at CCC for a certificate in multi-media journalism.
TCP: What interested you in joining the Marines?
TV: At the time, it was 2006 and a lot of my friends were enlisting. I actually went to PCC for a diesel tech program, but after a year of that I couldn’t let the opportunity by to serve for my country.

TCP: How is murderball played?
TV: It’s a game that was designed back in 1977 for people with upper-body impairments. It’s played four on four while on a basketball court. The ball is similar to a volleyball. At each baseline there are two cones that are set eight meters apart, and you have to carry the ball between the two cones. Meanwhile, the defense is trying to ram you, swat the ball out of your hands and knock you out of your chair.
It’s the only true, full-contact wheelchair sport around.

TCP: How did you hear about it?
TV: 2008 was a Paralympic year. When I got hurt, I heard about it while in rehab and doing my initial therapy. As soon as I saw it being played, I was hooked and went to the next practice that the team had, and it’s been in the rearview ever since. Kinda been my life.

TCP: Does school or work interfere with how much you like to play?
TV: It does. Now that I’m going back to school full time, since I want to get it done in a year, I’ve had to kind of cut back on my training hours and out-of-practice conditioning sessions we have.

TCP: How do you get in shape? Does eating right contribute to this?
TV: I think eating right is just continuous. If you take two months off and eat whatever you want, people with paralysis take a lot longer to shed that weight because we aren’t using as much of our bodies. So I try to eat right throughout the entire year.
When it’s time to buckle down on training, you really focus more on what you are eating and making sure you are getting the right carbs and fuel. You are also upping your activity hours as far as weights, and being in the rugby chair more with different speed and agility drills and endurance.

TCP: Do you play any other wheelchair sports?
TV: When I go participate at the National Veteran Wheelchair Games every summer, there are different events there. I’ll compete in track, swimming, nine-ball and table tennis. As far as a strict, competitive elite level, it’s mostly just rugby.

TCP: In an article I read about you by the Paralyzed Veterans of America, it mentioned that you want to help break many stereotypes. What stereotypes are you referring to?
TV: One of the big misconceptions with people in wheelchairs and high-level injuries, like myself, is a lot of people feel like we just sit at home and don’t really do anything. We just kind of watch the sun go up and down. Through sports and the Oscar Mike Foundation, we’re able get out there in the community to show people that, hey, just because we are in a wheelchair it doesn’t mean we can’t surf, skydive and go hiking at the national parks.

TCP: How many medals have you earned while playing murderball?
TV: The last time I counted, I had gotten up to 22 golds, and maybe up to 26 golds now. I’ve gotten countless “Best in Class” awards at various tournaments as well. I’ve been in the top 16 teams for eight years now. I will be trying out for the national team in January.