Fun on the mountain 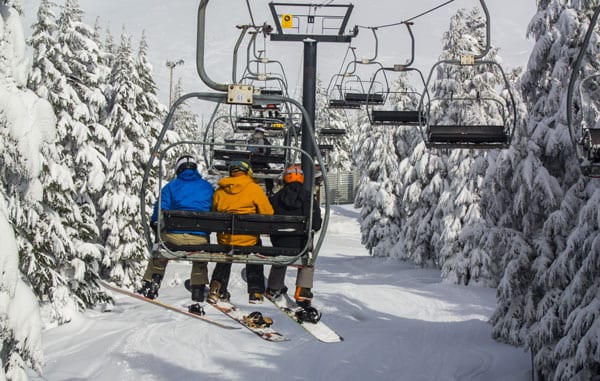 As winter looms over the horizon, Mount Hood has started packing snow for snowboard and ski lovers alike to take to the slopes for enjoyment.

With the end of fall term, students will find themselves with much less stress of the heavy anchor that is academia. Mount Hood provides a great opportunity to enjoy oneself. For ski and snowboard activities, Mount Hood Meadows and Timberline Lodge stand out as quintessential starters.

“We’re open daily for the season now, with lifts scheduled from 9 a.m. to 4 p.m. daily,” said Dave Tragethon, Vice President of Marketing and Sales at Meadows. “These great power conditions are driving visits right now as well as building our snowpack up for a great season.”

Timberline Lodge, which is also open, was constructed by the Works Progress Administration in the mid to late 1930s and was opened by President Franklin D. Roosevelt. The WPA was wrought from his executive order and part of the New Deal to bring unemployed American denizens back to work. Timberline Lodge was one of the resulting creations.

The outside of the lodge was also used for Stephen King’s “The Shining,” starring Jack Nicholson.

Right from there, Mount Hood glimmers brightly as a historic landmark of our nation’s history during a time of crisis and part of pop culture by being a film location for a movie.

“Start with skiing,” said student Dylan Mekel who participates in winter sports. Mekel also recommends cross country, where skiers walk up the mountain and ski down rather than using a lift.

Many variables contribute to the conditions, so be aware of what you’re doing and don’t assume the pipe you’re wanting to grind across is anything based on the conditions you read online.

When it comes to safety, Mount Hood Meadows warns patrons on their website, “Please remember that you are responsible for your own actions.”