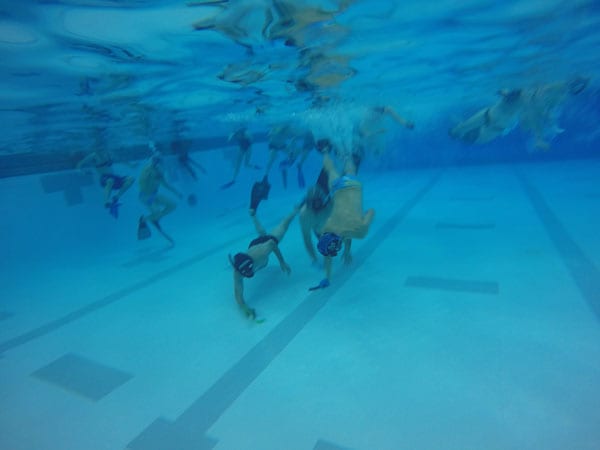 Players swim towards the hockey puck at Mt. Hood Community College on Jan. 31.

By Tim Vixay and Sam Weston

A few words come to mind when one thinks of hockey. Flippers and snorkel are usually not among them, but those are exactly what a person needs to play underwater hockey.

Underwater hockey is a worldwide sport, and its popularity in the United States keeps growing. The objective of the game is similar to its on-ice counterpart as players attempt to push a puck into a goal with a stick, except in underwater hockey the goal is at the bottom of a 6-foot swimming pool.

The Portland club practices every Tuesday at Mt. Hood Community College Aquatic Center. It is free for the first three times for new athletes, and equipment can be provided if needed.

The game is played 6-on-6, and the strategy is comparable to soccer or basketball. A game consists of two 15-minute halves, with a 3-minute halftime break. Because players can only hold their breath under water for an average of 5 to 10 seconds, teamwork is very crucial in this fast-pace sport.

Sam Luedloff is a first-time participant. He heard about the sport through a coworker and decided to check it out.

“It was exhausting. The snorkel made it really difficult,” Luedloff said. He confessed that he did not score any goals but had fun anyway.

Originally known as “octopush,” underwater hockey was invented in England in 1954 by Alan Blake, an open-water diver, as a means of staying active during the cold winter months. The sport is now played in more than 30 different countries, including nearly 100 club teams in the U.S., and has held a world championship tournament every two years since 1980.

United Kingdom native Lachlan Pockett has only been playing underwater hockey for a year but is very passionate about the sport.

“It’s the ultimate team sport; you need to work with your teammates,” Pockett said. “There’s a lot of strategy involved. It’s three-dimensional; you can swim over people, under people. There’s so many aspects of the game. The more you learn, the more you discover.”

Although the Portland club is fairly new, they recently competed in Denver, Colorado, where they finished in 4th place out of eight teams. Last year, at the USA Underwater Hockey National Championships, the club finished 9th in the country.

The club will compete at nationals again later this year in Cincinnati, Ohio.

For more information on underwater hockey visit usauwh.org, or if you are interested in playing with the Portland club visit meetup.com/Portland-Underwater- Hockey.