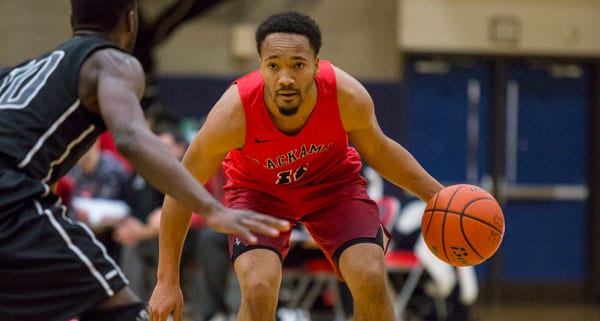 Elroi Butler dribbles up the court in a game earlier this season against Portland Community College on Jan. 28.

Unlike most players on the men’s basketball team at Clackamas Community College, who grew up in the U.S., one player finds it an unfamiliar place.

Having grown up in Israel, Elroi Butler found a love for basketball.

Wanting to come to the U.S. where the best play the sport, Butler found a way, and he talked about his journey to get to where he is now at CCC.

“I actually never thought about coming here and playing college ball until I was in Spain, at a basketball academy there,” Butler said. “Every yearthey have about 20 or 30 players who end up playing college ball. Once I got there, heard of that and saw how many successful players went to college and came out of college, I decided I wanted to do that also. If you want to be great, you have to be with the great players, and you got to play with the best.”

Once Butler found his way to Oregon, things began to come together for him.

“My sister happens to lives in Forest Grove, so I came to visit her during summer break,” Butler said. “I was just working out every day. And my sister lives right across the street from Pacific [University], so I went in there and talked to the coaches and they liked the way I played, and they said I could come in there and practice whenever I want.”

Even though Butler wasn’t a student there, the staff found a way to help Butler find where he needed to go.

“They asked me if I needed any help finding a new school and helped me out,” Butler said. “They were really good friends with Coach Wegner, the coach here at CCC, and so that’s how I ended up here.”

The men’s basketball coach, Clif Wegner, talked about meeting Butler and helping him get to Clackamas.

Wegner immediately noticed some things about Butler that pushed him to help the player out.

“His work ethic is phenomenal,” Wegner said. “One of the first things I heard from my friends at Pacific University is that he’d been working out with their team every afternoon, and also had been doing his own workout at 5 a.m. every morning.”

Wegner also talked about helping Butler adapt to the cultural change once he began his journey at CCC.

“He came over to my house for Thanksgiving and he’d never been to an American Thanksgiving dinner, and he said, ‘Coach, this is it? You just eat?’”

Butler commented on his Thanksgiving here and how it compared to similar experiences in Israel.

“Back in Israel, we would have a lot of days that we just ate a lot of food. Whether it was day, night, or, it didn’t matter, we just had at it,” Butler said. “It was always a time being close with family, and having Thanksgiving here kinda reminded me of those times.”

Of course, being from a different country presents challenges and different perspectives, which Butler also mentioned.

“The basketball competition here is no doubt a lot better,” Butler said. “As far as the coaches and people, it’s a big difference. I feel like people here are more polite, friendlier and want to get to know you. In Israel, they’re more aggressive. If you’re not from there, it’s harder to adapt and connect with people. But I’m the type of person where I’m going to adapt to whatever situation you give me, so I actually like moving from place to place.”

With the men’s basketball team trying to surge forward with a second half season push to get into the NWAC tournament, they look for any competitive advantage against their opponents, and having a player with a work ethic like Butler’s helps the team, according to Wegner.

“When you hear about a kid with that kind of work ethic like Elroi, it’s a kid that you want to know. This is a kid you want in your program,” said Wegner. “So we’re thrilled with his perspective, his maturity and his leadership.”