Athlete of the month: Lexi Pittman 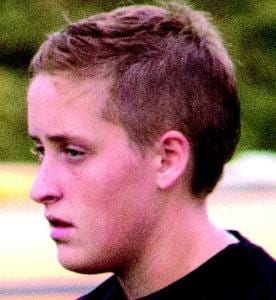 After each month, I will pick an athlete from all the sports teams to be Athlete of the Month. The selection is based mostly on performance, but not exclusively. For September I chose Lexi Pittman, freshman goalkeeper for the women’s soccer team.

Pittman recorded 59 saves over seven games last month, including an 18-save game that would’ve made World Cup Star Tim Howard proud. I recently had a chance to talk with the star newcomer. Here’s what she had to say about the season so far, her sports career and her personal life.

Blake Thomason: Why do you think you’ve been successful this season?

Lexi Pittman: I think a lot of it goes towards my coach. She’s helped me out a lot. I’ve actually only played soccer one season my whole life – my senior year – and then I ended up here. I think a lot of it [comes] from Janine [Szpara], she’s a really good coach. I’ve learned a lot from her.

BT: Why did you decide to play soccer so late?

BT: Clackamas hasn’t done as well as a team as you’d probably like. Does anything need to change or improve?

LP: Team chemistry is actually really good, so I don’t think there’s anything we need to change about that. Scoring would be nice. We don’t score very much so it’s a lot on the defensive end. But we’re working on it and doing a lot better.

BT: Do you have any players you look up to?

LP: Actually, it’d probably just be my coach. I know she’s not a player anymore but I’ve read a lot about what she’s done and what she’s accomplished. She was really successful, and I’m actually really grateful for her to be my coach.

BT: Do you have a favorite memory of the season so far?

LP: There’s this one time we were all out at pizza and someone made me laugh really hard and I spit water out of my nose and all over the floor. I don’t remember what Karla [Aranda] said, but she said something that made water come out my nose and my mouth because I was laughing so hard.

BT: Are there any things people don’t know about you? Interesting facts?

LP: (turns to nearby teammate) Hey Tori, what’s something people don’t know about me? I don’t think people know a lot, I’m really quiet. I just got a cat, so I’m playing with my cat a lot (laughs).

Posted in Athlete of the Month, Sports