Head volleyball coach Kathie Woods is retiring after 32 years of success on the sidelines for Clackamas Community College, having hoisted the championship trophy twice for the Cougars in 1996 and 2004. She also racked up an NWAC record 836 wins. She will retire as the sixth winningest volleyball coach in the history of junior college athletics and first in the NWAC.

CCC retires more than just the winningest coach in NWAC history, it also retires a coach who is beloved by everyone in that program.

“Kathie is a coach that really understands that there’s more memories that you can make than the games you win and lose, there’s also the friendships that you make and the things that you do,” said former CCC volleyball player Rhea Cardwell.

It was apparent Woods knew how to make friends with everyone in the program, especially her players. On Saturday, April 25, CCC hosted its annual alumni volleyball tournament. Among the participants were former players of Woods from each of her 32 seasons as head coach. The tournament turned into a celebration of all of Woods’ accomplishments, both on and off the court. Former players went head to head with the Southern Region Championship team of this year and competitors shared stories about their coach.

“Over some holiday weekend that there was, we had to call each other because we have a workout we were supposed to do,” said former CCC volleyball player Kathy Collins-Johnson. “We had to call each other and ask questions, did you do your this, did you do your that workout, did you do your this then at the end you had to say ‘I love you you’re ugly.’ Who could forget kisses from your coach? When we would travel to the hotel she would come around with chocolate kisses, she would hand you a big bag of chocolate kisses and say ‘kisses from your coach.’”

The stories went on and on, from water slides outside Randall Hall to Woods showing off her dance skills during a game. The praise went on and on as well. Every player had something to say about how she was the most caring and beloved coach they ever played for.

“Playing for Kathie changed my life and I think she’s changed so many lives and made everyone better people,” said former CCC volleyball player and assistant coach Heather Martin.

It was amazing to hear what the players had to say about their coach. Thirty-two seasons is a lot of different teams to coach and Woods knew every player from every team and could probably tell you their favorite flavor of ice cream. She knew them that well.

“Most people retire because they find it rough or they find it hard or they just get tired,” said Woods. “I don’t have any of that, I love it, I love it. It’s going to be sad, I’m going to be really sad but you can’t coach forever. I told myself eventually ‘Kathie you have to stop, you won a championship it was hard getting that back lets go out on top.’”

Despite her retirement, Woods plans on spending time around the team. CCC proudly retires an amazing head volleyball coach. 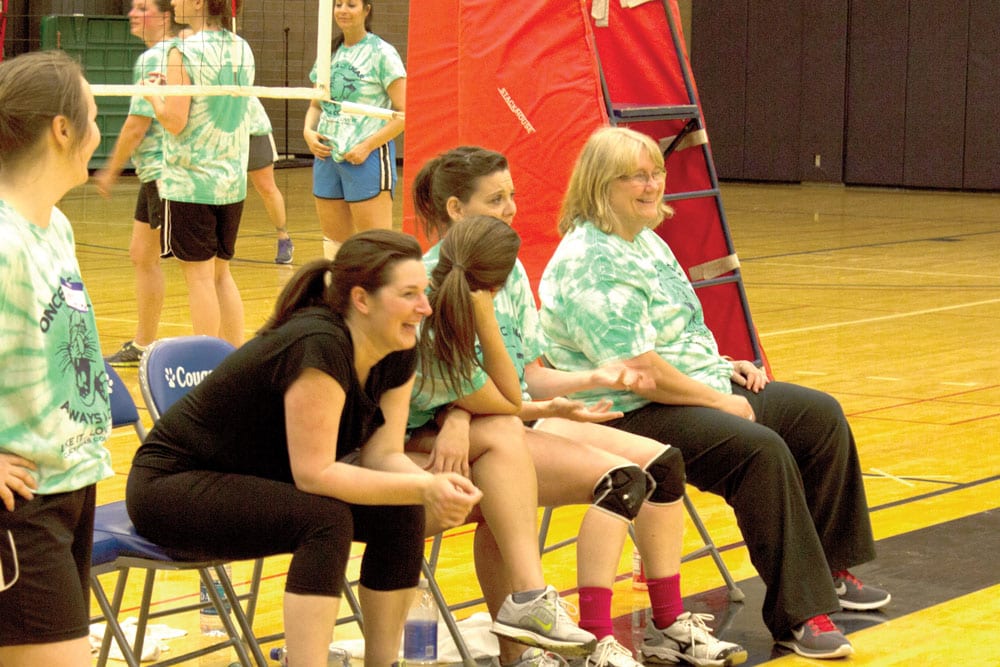 Kathie Woods, far right, laughs with her players during the Alumni Tournament in the Randall Hall gym on April 25. The tournament was Woods’ last game coaching at CCC.

Story and Photo by: Jack Spencer