Marine in the outfield

Sophomore outfielder Tyler Parker was one of the best high school baseball players in Oregon. Playing at Liberty High School, Parker was called up to the varsity team as a freshman and stayed at that level for the rest of his career, but he didn’t just maintain, he thrived, making the Northwest Oregon Conference’s All-League team three times, Oregon’s All-State team twice and in 2015 was named the NWOC and Oregon player of the year.

With all of his success in high school, Parker would have been a very sought after recruit for colleges, but that changed at the beginning of his senior year of high school when Parker enlisted in the U.S. Marine Corps.

“I didn’t want to take the normal route of graduating high school and just going to college,” Parker said. “I wanted to be a part of something bigger. I could probably be a senior at a big school right now, but that’s not the plan God had in store for me.”

Inspired by his father, who Parker said regretted not serving when he could have, Parker shipped off to basic training in San Diego, California which lasted 89 very very long days as Parker puts it. Boot camp was the hardest thing he’s ever done, saying the mental and physical toughness it took was no joke; Parker credits the training with maturing him, but always had his mind on returning to baseball.

“I knew with my contract, barring a deployment, that I’d be able to come back and continue playing,” Parker said.

Parker isn’t ignorant to the possibility of a deployment.

“My attitude towards a deployment was if I had to go, then I’m ready for it,” Parker said. “I knew if baseball didn’t work out for me then I’d fight and sacrifice for the millions of kids like me with a dream to play baseball.”

“I’m fortunate enough to be born in America and have been provided so many opportunities to be successful in baseball and that’s not the case everywhere,” Parker said. “So every day I get to play, I treat it as a privilege, because I know that I could be halfway across the world in 48 hours.”

Parker’s transition back to baseball went smoothly, as the right-handed slugger quickly found success at Clackamas Community College, leading the team in home runs, six, and runs batted in, 24, in 2017.

“[Parker] has been a great asset to our team the past two years, one of the best hitters in the NWAC, with a ton of power, and it showed with his nine home runs this year,” Head Coach Jim Hoppel said.  “He was one of our  captains the past two years and his leadership in the weight room, classroom and the field had an impact with the team.”

This season Parker once again led the team in batting average (.301,) HRs with nine, which was the most by a Clackamas player since at least 2006, and RBIs with 31, but it’s the lack of success in the win column that really got under his skin while playing for the Cougars.

“I can’t even describe to you how frustrating it was,” Parker said. “I’m used to winning and not just winning, but winning by 20. For Liberty and the Portland Barbers (Parker’s summer league team,) we went out every day and expected to absolutely hammer teams.”

Parker said he felt things were just different at Clackamas.

“We had to play the game a different way to manufacture runs,” Parker said. “Unfortunately we just couldn’t get it done often enough and it sucks.”

Parker was hoping that the team could put the program back into the NWAC playoffs, but even falling short, Parker was reminded of his love for the game.

“It was a grind,” Parker said. “There were a lot of ups and downs and it’s frustrating to put in so much work and not have anything to show for it in the postseason, but being here for two years really reminded me of my love for baseball and why I play the game.”

Parker made an impact on players in the freshman class, who really took a notice to his work ehtic. 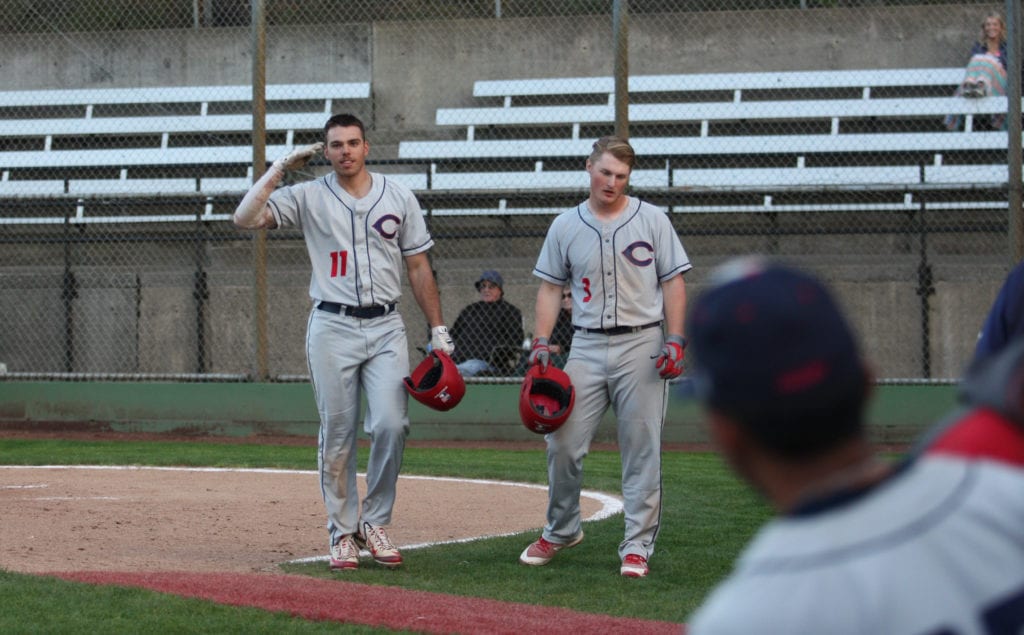 Parker is now transitioning into what’s next for him as a baseball player as he considers offers from Division-1 and D-2 programs in Oregon, Washington, California, Arizona, Texas and North Carolina. As far as which way he’s leaning, Parker just hinted that he wants to head South.