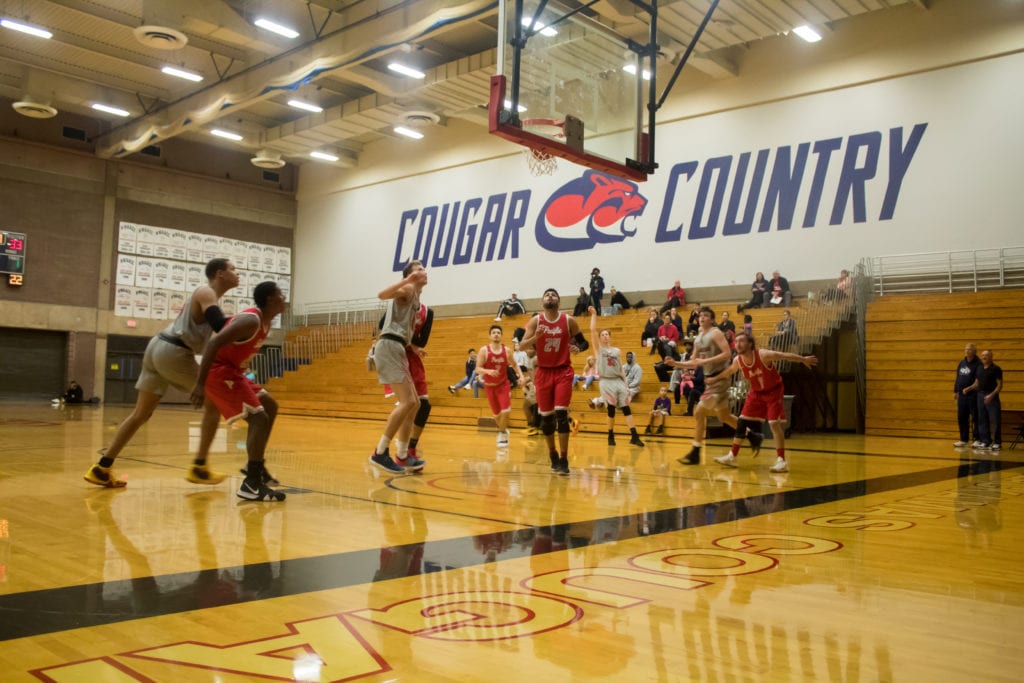 The Clackamas Community College’s men’s basketball team opened the season Nov. 16 and find themselves with a 2-0 record after defeating Pacific University’s JV 101-70 on Nov. 16 and Multnomah University JV 106-73 on Nov. 17.

The Cougars have a lot of new faces this season, just returning four players from the 2017-18 squad that made it to the NWAC playoffs.

“I like the group of kids,” head coach Clif Wegner said during practice on Nov. 15. “I think the chemistry is good. I think the skill level is good. We’re very inexperienced and very young, a lot of new faces. It’ll take a while to learn, adapt, acclimate and adjust, but I think by the time league comes around in January we’ll be competitive with most the top NWAC teams.”

The Cougars added a lot of homegrown talent this offseason with eight of the 10 freshmen coming from Oregon. Freshman guard Robert Ford helped Jefferson High School to back-to-back state finals appearances, winning it all in 2017. Redshirt freshman post Matt O’Brien was a part of the Clackamas HS team that was beat by Jefferson in the 2017 Finals 67-70.

Now on the same team, O’Brien and Ford helped the Cougars dominate in their opening game versus Pacific. Ford was red hot to start the contest, shooting 6-7 from the field and 3-3 from beyond the three-point arc in the first half. O’Brien added 6 points of his own with an exclamation point coming when he threw down a ferocious dunk over Pacific defenders. Sophomore Adam Gehrig led Clackamas in scoring in the first half with 17 and Clackamas went into halftime leading Pacific 55-33.

“I think we’re going to have a good season,” O’Brien said. “We came out strong today, obviously it’s not a league opponent, but we came out strong, we played well together and finished a good win.”

The second half was more of the same as Clackamas continued their dominance. Gehrig finished the night with 30 points, Ford stayed hot finishing with 23 points on 8-9 shooting from the field and was perfect from downtown with going 5-5. Ford didn’t just look to score though as he led the Cougars with 16 rebounds, and recorded nine assists, falling one short of a triple-double. Wegner said he’d never seen a point guard rebound like that before.

“I just like to help my team win,” Ford said. “I just got a little sparkle for the ball or something, I just like playing.”

Clackamas’ dominance carried over to their second game of the weekend versus Multnomah. Putting up 102 shots, the Cougars cruised to a 106-73 victory. Led by freshman forward Tariq Harris and Gerhig’s 19 points a piece. Freshman post Mathias Nchekawube added 18 points and 10 rebounds to record his second double-double of the year after his 10 points, 11 rebounds performance against Pacific. Ford also recorded his second double-double with a 13 points and 13 assists.

“It feels really good to be back,” Gehrig said. “New team, everyone’s better it’s great. Chemistry’s already there, it feels like we’re in mid-season form.”

The Cougars will travel to Lakewood, Washington Friday to take on Bellevue College in the Pierce College Tournament at 6 p.m.