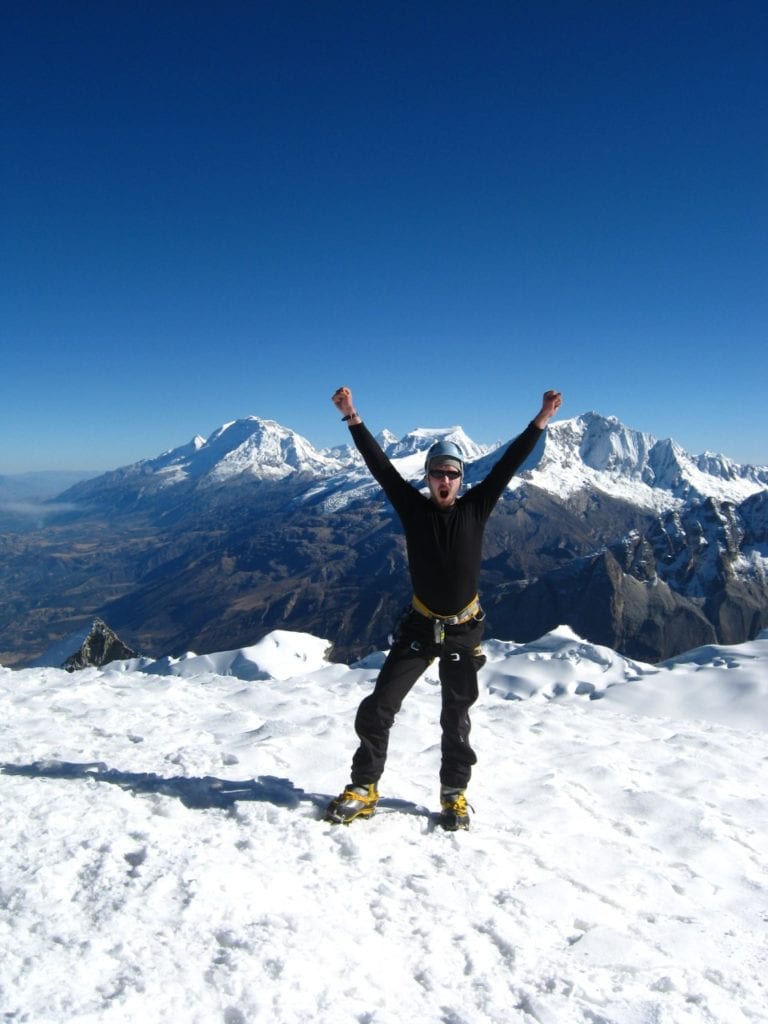 George Burgess is a chemistry teacher here at Clackamas Community College who has a side of himself that belongs on mountains and hills. Burgess sat down with “The Clackamas Print” to discuss his wild passion for peaks.

The Clackamas Print: How did you get into science?

Burgess: You know, you go through K-12 education and take some science and I found that that was kind of what spoke to me the most. I had a general sense going into college that that was where my interests lay. Then I took organic chemistry my sophomore year and just absolutely fell in love with it. It’s a gorgeous, very symbolic representational, almost artistic picture of the universe and I was just entranced with it. I really wanted to share that experience and help other people get that same beautiful picture as I got.

TCP: How did you get into climbing?

Burgess: My dad has sort of taken me into the outdoors since I was 3 or 4. I grew up hiking in the Wallowa Mountains in Northeast Oregon and the Blues in Southeast Washington. Eventually I started realizing I wanted to stand on top of the tallest thing and see what’s around and that turned out to be a real rush. Then it turns out there were these lists of summits that you could dig into and I love, love me some list. So that was kind of how that snowballed out of control and now I spend large swaths of my free time climbing obscure and not so obscure mountains.

TCP: How many peaks have you climbed?

Burgess: Within the threshold that I set, that is generally set by the peak bagging community of 2,000 feet of prominence. I’ve done 132, 65 in Oregon 65 in Washington and two in California. In the lower 48, which is kind of my long-term lifetime goal, there are 1,200. So, if I do some mental math with actuarial lifespan and how I’m doing, I feel like I’m more or less on track to maybe finish that before I die.

TCP: Your goal is to peak bag all the lower 48 states. Is there any particular one that you look forward to?

Burgess: There is a lot of stuff remaining in the North Cascades of Washington, which is honestly some of the most challenging and most beautiful mountaineering in the whole country. Alaska is kind of is its own crazy animal but, yeah, the North Cascades, I’d say Jack Mountain by Ross Lake, Glacier Peak. Let’s see, what else, Mt. Shuksan is supposed to be a really wonderful climb and yeah, in general I’m just psyched on the North Cascades.

TCP: Do you have a favorite hike?

Burgess: Ah man, for someone like me that’s choose your favorite child territory, but I had a feeling that you would ask something like that, and so I came with something prepared. The coolest hike, coolest climb I’ve ever done, probably Mount Baker. It’s got a really excellent moderate Glacier approach, to a semi-technical summit. I went with a bunch of great friends and we took a day and climbed it and then snow ported down the glacier afterwards, and it was just a hoot. So, Baker is up there. Mt. Stuart in Central Washington is a truly outstanding peak. And then locally, to give a little more kind of local flavor, my favorite just sort of day hike is Devil’s Peak out of Rhododendron.

TCP: Do you have any advice for people who want to hike?

Burgess: You need the right gear, but you don’t need as right of gear as you might think. You can’t be going out there in jeans on a wet day in the cold. Your cotton will steal the warmth from your body and you will not have a pleasant time, but you don’t need to be dramatically outfitted. You just want to make sure that you are commonsensically prepared. I can’t underrate the importance of not worrying about whether you’ve got the absolute best destination in mind. Like go drive down a Forest Service road, park at the side and walk up part of it. You will discover lots of hidden gems in the Oregon outdoors that are really easy to access and that don’t show up on lists of great trailheads to check out. And then make sure that you have the ability to communicate in the event that something goes wrong. Make sure you got your cell phone on you and charged and that you’re keeping an eye on whether or not you have reception, and maybe getting a satellite communicator because they’re getting cheaper and cheaper.

TCP: What top three hikes would you suggest for beginners?

Burgess: Devil’s Peak is probably a little ambitious in that case. That’s not much, but that’s maybe the third or fourth thing you would want to do. But if it if you’re just starting, the Gorge is packed with great, fairly accessible hikes. So like Angel’s Rest is nice and short it gets just a little rocky but never in a particularly, like you never feel exposed, you never feel like “Oh I have to keep my balance I’m going to fall off the mountain” and it’s steep, but it’s short. Dog Mountain also in the Gorge is a great one for that. This one’s a little bit further afield but down in Corvallis is Chip Ross Park. I spent two years in Corvallis, and so I know the area pretty well, there’s a bunch of great hikes there and Dimple Hill which is a nice little summit. Forest Park out in the West Hills doesn’t have a lot of named summits. It’s not a peak bagging thing, but yeah, if you’re looking to get out and hike Forest Park is great.