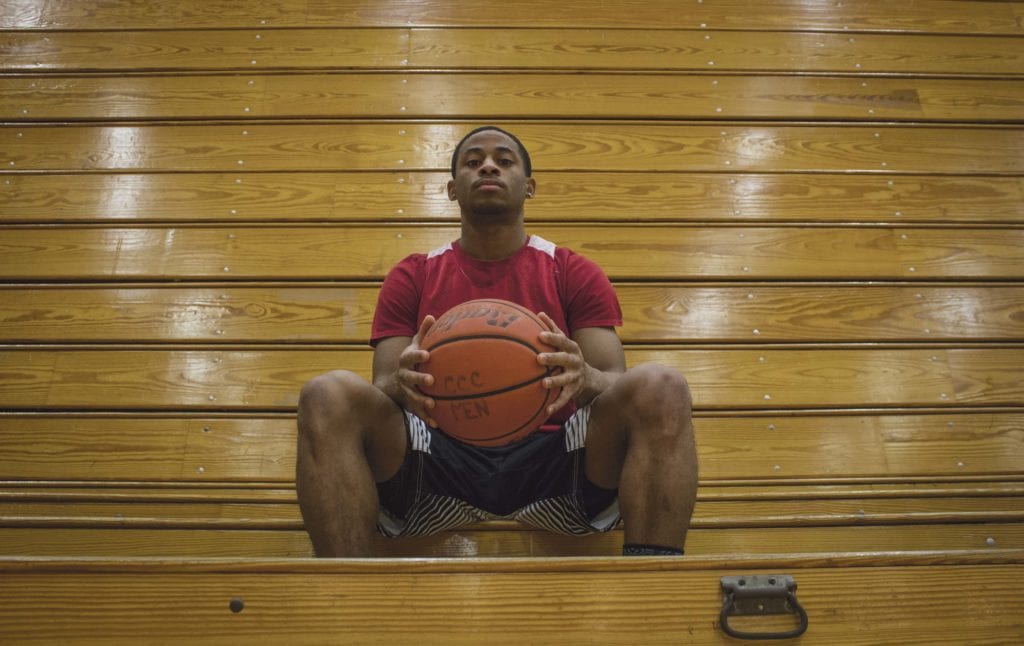 Sophomore guard Nygil Carr is one of the most dynamic scorers currently playing in the NWAC. Averaging 19.8 points per game, Carr ranks 9th overall in the NWAC for ppg. His highest scoring game this season was 51 points. The Clackamas Print caught up with Carr and asked him about basketball and his other hobbies.

Q: Why did you choose Clackamas Community College?

A: One of my old Amateur Athletic Union (AAU) coaches went to the University of Oregon, he played basketball for them and he was really good friends with coach [Brian] Stamme, so he thought it was a good move for me to come in, switch my game up and play a different style of basketball. Back when I lived in Houston, we had fast ball, but not here, you know? I came out here to see something new and get away from home.

Q: Has it been hard being away from home?

A: Nah nah. Not at all, ‘cause, I mean, when I played with AAU, I was so used to traveling and going to different places and being away from home, it wasn’t bad for me at all. I mean it’s kind of like at home here. It’s just I don’t have my parents, my family to see every day. But I’m out here taking care of business and going to class and playing basketball.

Q: How did you get started playing basketball?

A: My mother, when I was young, took me to a lot of Houston Comets games, (women’s basketball team Houston had) and I went to a lot of Rockets games. My uncles, my mom and aunt, they all played sports. They tried to get me to play other sports, but I always stuck with basketball.

Q: Are there any basketball players that you look up to?

A: I look up to Isaiah Thomas, Nate Robinson and Chris Paul, all because they’re sharp guards just like me. I especially like Isaiah Thomas because we kind of imitate each other in our games. I kind of try to watch him and imitate some of the stuff that he does. That way I can transfer it to my game. And we’re same height you know? I can’t just look up to someone like Kobe who is 6’6” and I’m like 5’11.”

Q: How has the team improved as the season has gone on?

A: We learned how to play together. For the most part, that’s it. We just like having fun instead of making it all a business thing. We’re making it both business and fun – basketball is supposed to be fun.

Q: Is there anything you do before a game to put you in the zone?

A: I try to stay quiet, listen to music, pray sometimes and just relax myself.

Q: What’s the craziest thing that has happened so far this season?

A: Probably our alumni game when I hit a buzzer beater and I got a steal to put us on top to win the game. For the most part, we’ve been having a good season.

Q: Does anything crazy ever happen on the bus?

A: No, not really. Whenever we travel we really don’t do much but sleep. Honestly, I can’t really recall because I sleep most of the time, because the rides are long.

Q: What’s your favorite college court to play at?

A: I have a number. But I like Portland Community College just because of the energy I get in there. Just the whole setup. I like how Portland has a lot of high energy people.

Q: Who, from you team, would win an arm wrestling match?

A: (laughs) Probably Briggs [Young]. Yeah, he’s pretty strong. I call him Captain America, so I think Briggs would win.

Q: How have you improved since high school?

A: I don’t let much get to me in a game. I try to relax and not take any crazy shots. I’m just trying to get my teammates involved because in high school, I kind of just did whatever. It was really because I was in a different type of shape. Now, I have to take care of my body differently and try to eat better. I try to eat better each and every day, but you know, sometimes it’s hard going to class and going to practice. I don’t feel like cooking, I just be trying to get something to eat so I can relax.

Q: Do you have a special diet right before a game?

A: I try not to eat on game days. I know that sounds crazy, and coach Wegner and Brian Stamme get on me about not eating, but I don’t really like eating before practices or games because it upsets my stomach. I think I play better on an empty stomach. I just drink a lot of drinks. Sometimes I’ll eat a granola bar, but other than that I don’t eat much else.

Q: What do you like to do on your free time?

A: I like to play [basketball] and go shopping. For the most part I just be playing the game a lot because I do a lot of online shopping now, which allows me to stay at home and play more.

Q: Do you play any video games?

A: Oh yeah. I play Fortnite, Call of Duty, Mafia. I play a lot of shooting games. I try to get my rank up when I’m not in class or at practice.

Q: What’s the most interesting thing that most people don’t know about you?

A: Well, I take ceramics and I enjoy that. A lot of people see me and they think that I’m a regular person, but I like doing weird stuff like going to museums.