Softball looks to reign the NWAC 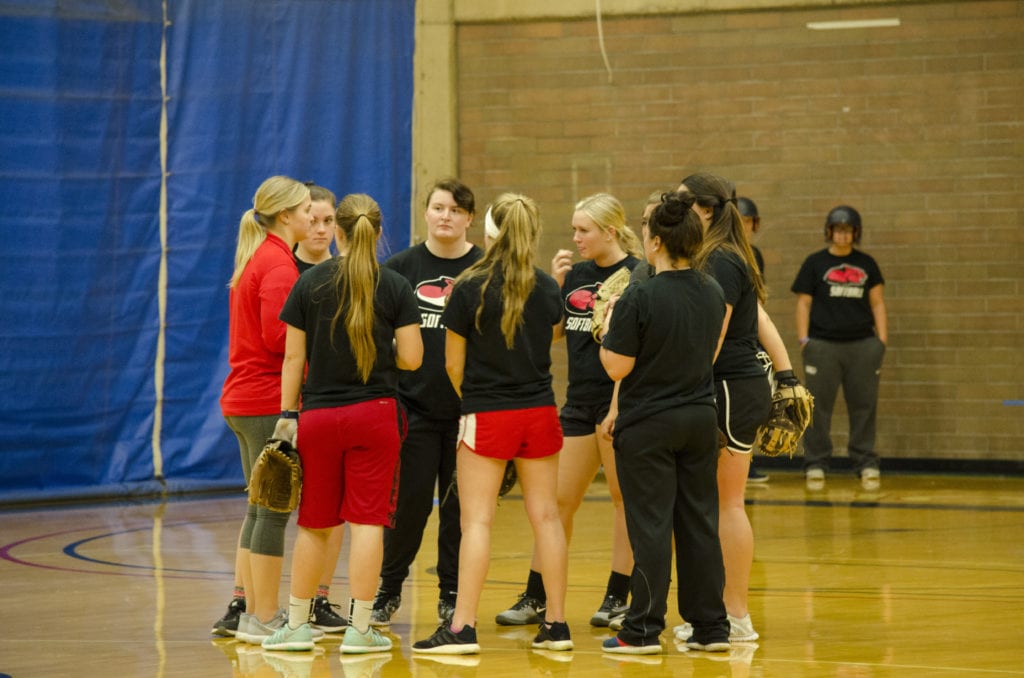 The team gathers for training in the gymnasium on Feb. 23. Photo by Marjorie Guttery

As the rain-drenched fields slowly dry, the Cougars women’s softball players are lacing up and getting into the season. This year’s workouts are in full swing.

The sophomore-heavy squad looks to return to the top in this upcoming season to claim the title at this year’s NWAC tournament. Placing fourth last season, the Cougars were left with a disappointing result. However, with many of the players returning this year, the team is looking at a much better position to take home the title.

Jessica Buel is returning for her eleventh season as head coach and looking to bring Clackamas its first NWAC title since 2012. When asked how she feels going into the season, Buel had a lot to say.

The team will play away from home for the first month, so traveling will be a big part of the early season for the Cougars. When asked about this concern, Buel seemed optimistic.

“I also think it puts more pressure on the girls to perform. We always travel the day we play, so we might travel four hours and they’re going to get out of the vans and be ready to play. It prepares them for long days and unknown situations,” said Buel.

One of the returning players is sophomore pitcher Ceidi Nobriga, who was considered as the number two starting pitcher. She gave some insight into how the team’s preparation is going.

“It’s way tougher than last season, which is really getting us ready for the actual season,” Nobriga said.

“I want to hold myself accountable and do what I have to do on the mound,” she said.

Another returning player, pitcher Megan Berrigan, was asked about what she’s looking forward to most this season.

The Cougars finished an admirable fourth place in last year’s tournament; and with a majority of the starters returning to this year’s squad, the outlook is promising.

We’re all hungry because of last year,” Berrigan said. “We ended on a note that we didn’t want to. We have a majority of a team that’s been there before, so we know what we want and are pretty hungry to go get it.”

“I believe we can win it all,” Rose said. “With our team bonding and the chemistry we have and the sophomores growing from last year to this year, we could win it all.”

The overwhelmingly optimistic squad is hoping to be firing on all cylinders this season, and they have much to look forward to. The team is putting in a lot of work to bring home that title. Their first home game is March 21 at 3 p.m. against Lower Columbia College