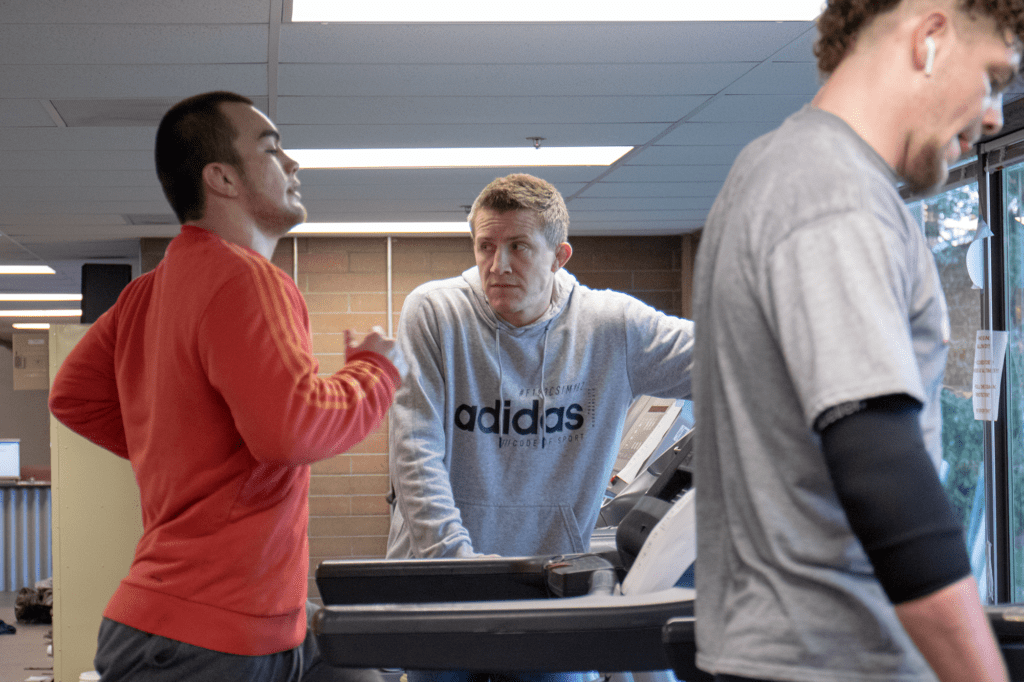 There I sat — legs shaking, head foggy, wondering if it was safe for me to drive home. Monday, Feb. 10, I joined the Clackamas Community College wrestling team for one of their regular conditioning sessions. The aftermath? A sore body, blurry vision and a greater appreciation for some of the best athletes we have to offer.

Our wrestling team has been absolutely dominating this season; currently ranked first in the nation as a team at the junior college level, CCC’s wrestlers boast eight players ranked top 10 in the nation in their respective weight class.

Wrestlers are notorious for their insane work ethic and rigorous training regimen, so I wanted to see what it would look like for a normal guy like me to attempt one of their workout sessions. They kicked my ass.

For the workout, I paired up with the No. 1 nationally ranked 133-pounder, Jason Shaner. He took me over to the treadmill for the first part of our workout and in no time I realized that my definition of running is far different from theirs.

Every minute on the minute, the speed and incline of the treadmill changed, varying the level of difficulty throughout the workout. However, it all felt the same after the first four minutes — it just hurt. Essentially, we ran at a dead sprint for 20 minutes, mostly uphill; sometimes the speed was so intense that it felt like more than a sprint, almost like we were running from dogs.

Many times I had to stop running to catch any wisp of breath I had left, or lower the speed so I wouldn’t be thrown off the treadmill. There were a few moments when I wondered if I was going to live to see the end of the session. Meanwhile, Shaner had no problem completing the workout.

At one  point during the treadmill session, I told Shaner that I had to get off and get some water, but he insisted that I stay on and continue. We were not allowed to get off the treadmill until the workout was complete. This is when I realized that these wrestlers are not just physically tougher than me, but mentally as well.

Head coach Josh Rhoden wrote in an email, “In wrestling, conditioning is done on several fronts. The obvious cardiovascular conditioning that helps you and I not breath as hard when we are exerting ourselves, allows for quicker recovery and better execution, but we are also conditioning our minds to be mentally tougher and able to endure more. Nothing makes someone stop focusing on their game plan more than being physically exhausted, so we practice mental warfare as well in our training sessions.”

After the grueling treadmill workout, we moved onto the second part of our conditioning session: deadlifts and power cleans. Quite like the treadmill, I wildly underestimated this workout. Every minute we alternated between Romanian deadlifts, power cleans and single-leg deadlifts. Within that minute, we had a certain number of reps we had to complete, and any time we had leftover was our break. There was never enough time for a proper break.

I have to be honest, I cheated a lot during this workout. I did fewer reps, took longer breaks and skipped out on a few sets. On multiple occasions I walked outside to the cold air, clinging onto the wall to hold myself up. At this point I was so physically and mentally exhausted that I started calling my workout partner, Jason, by the wrong name. I started calling him Tommy. I proceeded to call him Tommy for the rest of the training session, unknowingly. Sorry, Jason.

While I was skipping sets and taking extended breaks, I started to notice something really special with this team. There is a clear, strong sense of camaraderie that is felt within this group of guys; I noticed teammates supporting and holding one another accountable the whole time I was there. ‘Finish every rep’ was encouraged throughout the Randall Hall fitness center.

As a team, the wrestlers will hold workout and training sessions at least six times a week, not including any individual work. When looking at this team, it’s clear to see that these intense and demanding training sessions have a profound effect on the bond that is grown between these men.

“As a team we go through a lot together because of our tough practice schedule,” Shaner said via text. “It makes us tough together.”

Rhoden said, “Wrestling is a weird sport in that you are all there bleeding, hurting and suffering together and there is absolutely something unique about the bond you form with other people who are sacrificing toward a common goal. It’s something that is very unique and special.”

As the final minute of the workout sounded, I felt so accomplished and fulfilled for finishing the workout. That was until Jason informed me that this was their second workout of the day, as they had a two-hour training session earlier that morning. Yet again, I was reminded that these wrestlers are truly a different breed.

Coming away from the workout, I now have a much stronger appreciation for the incredible athletes that we hold here at CCC. As I played sports my whole life, I thought I understood what hard work looked like. Now I can see what it means to take that hard work to the next step in order to truly be great. I am extremely grateful to the wrestling team for allowing me to just get a glimpse of what it’s like to work like a champion.

The cougars wrestle for the last time this season at the NJCAA National Championships in Council Bluffs, Iowa, on March 6 and 7.