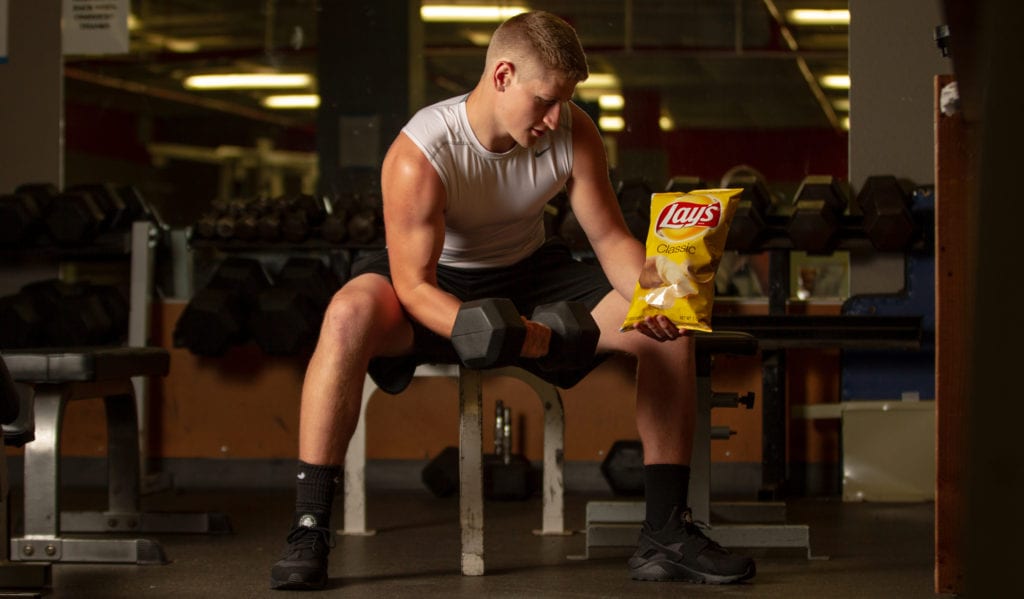 Typically, the first thing that comes to mind when discussing an athlete’s success is their fitness. Something that is often overlooked is what they actually eat.

Imagine a juicy burger, a perfectly cooked lobster, the cheesiest pizza you could possibly dream of, or any other food that appeals to your taste buds. These are the kinds of foods that make you want to sit back and relish in the flavor. But what do they all have in common? They’re comfort foods: delicious tasting but typically bad for your body.

Jennifer Nickell, a personal nutrition and nutrition for nursing students teacher at Clackamas, said the food choices most people make isn’t based on nutrition.

“Americans tend to base their food choices on taste preference and habits,” Nickell said. “However, nutrition’s importance as a factor in health is very clear to most Americans. You can see this in the broad use of terms like ‘healthy’ and ‘natural’ as marketing schemes for food,” Nickell said. “These terms work because Americans know that nutrition and health go hand in hand. They want to make healthy choices, but it can be hard to know what is actually healthy.”

Kevin Arizo, the athletic trainer at Clackamas, said living situations can have a big impact on what food choices athletes make.

One particular sport that focuses on diet and weight gain or loss is wrestling. Wrestling coaches can require that a player weighs a certain amount to be in a certain weight class that would ideally allow them to perform better against an opponent of the same weight class.

Freshman wrestler Greg Guzman gave insight to the process of cutting weight. “Everyone is different in their own way, we all have our own diet plans. Honestly, we don’t really diet, we just cut out certain foods,” Guzman said.

“[We cut out] processed foods, anything that’s fat or that stays in your body too long. Usually every other weekend after weigh in we’ll lose like 15 pounds and gain it all back and then lose it all again.”

When you hear the word diet, what comes to mind? Most likely cutting out foods in order to lose fat or gain muscle. However, an athlete’s diet is usually increased eating in order to make up for the amount of calories they are losing during vigorous exercise.

“In season the biggest thing is making sure you have what you need for practice and games,” said freshman Jamie Stull of the men’s basketball team. “Get your body right and eat the proper nutrition but also with such a high calorie output you eat more than normal and that’s okay. Out of season you lower the calorie count because you aren’t as active, but now it’s the time to get bigger and stronger by lifting so you eat more protein. What you eat affects how you play in many ways. For example, it’s common sense to not drink chocolate milk before a game because of how heavy it is in your stomach, however, chocolate milk is great for recovery. It’s all about what you eat and what time you eat.”

It’s important for athletes to be conscious about what sort of foods they are putting into their bodies that will give them the right outcome for their sport. Not every athlete will eat the same thing; cross country runners and wrestlers have very different performance expectations. One requires an extended amount of running, and the other requires brute strength.

Landy Williams, a freshman on both the soccer and women’s basketball teams said, “[Diet] plays a big role [in athletics] because both sports I play require a lot of running so if I eat bad then it’s harder to stay in shape. You also feel a lot better while playing when you eat healthier rather than feeling groggy from junk food.”

Nickell talked about the best way to go about eating throughout the day.

“Eating small meals and snacks throughout the day that provide a small amount of protein, complex carbohydrates and unsaturated fats will provide consistent energy, protein, vitamins and minerals throughout the day,” Nickell said. If an athlete is participating in an endurance event such as a marathon, they will probably want to load up on complex carbohydrates the day before the even to ensure that they have optimal glycogen stores during the activity. It is important to note that athletes need to know how many calories they need and understand the impact of their activity level on their energy needs. Physical activity is the most variable part of calorie needs as it depends on muscle mass, age, gender and height.”

A common response to the kinds of meals athletes at Clackamas eat during season included chicken, rice, fruit, turkey, vegetables and fish.Overall, whatever an athlete decides to put into their bodies both in season and out of season is going to have an effect on performance, weight and muscle mass. But the question still remains; how big of a role does the fuel athletes put into their bodies impact their performance?