The race to the playoffs 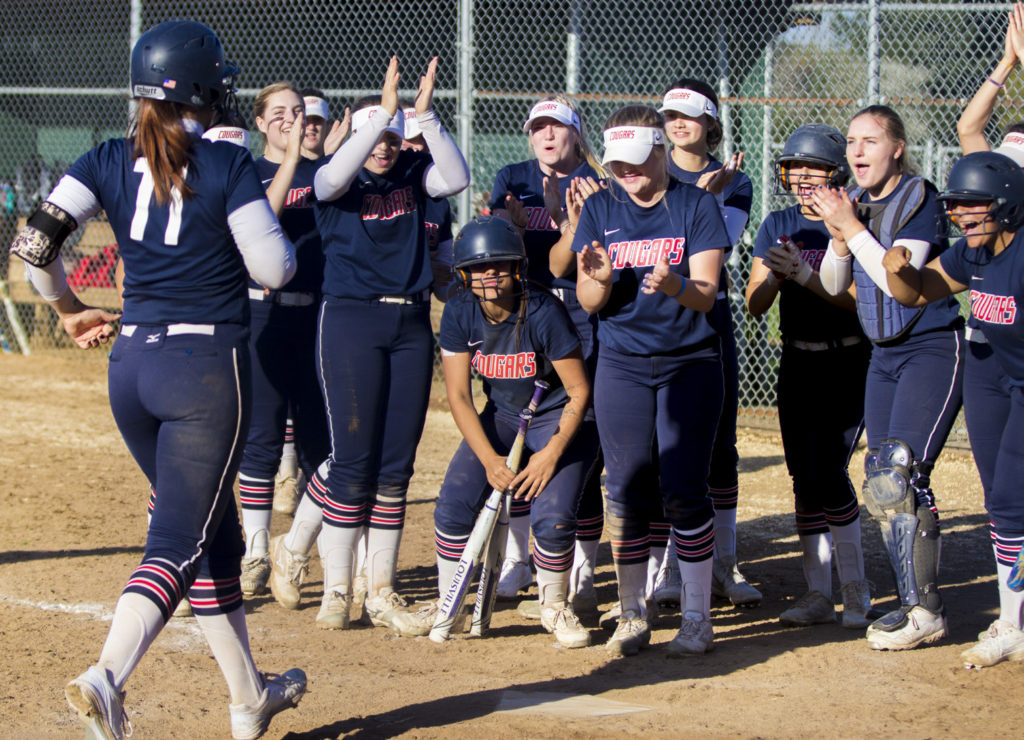 The Cougars are 1-5 in their last six games and have an overall record of 17-17. Despite having difficulties winning last week the Cougars jumped up to eleventh in the ranking percentage index edging Wenatchee Valley by 0.000008 points. The top 16 teams in the RPI make the NWAC playoffs. Head Coach Jessica Buel feels her squad is starting to get the hang of playing with each other and getting ready to make big strides in the second half of the season.

“We’re still figuring ourselves out a little bit. We’ve had some great games, we have a ton of talent, so I think if we can put it together this last half then we’re gonna have a great year,” said Buel. “We’ve had some great hitters from Kat Hylton and Natalie Munson giving us the home runs to our one two hitters are leading us off well. [We’ve been] pretty consistent throughout the whole lineup.”

Sophomore catcher Natalie Munson mentioned that the team has also been doing some reading to get focused and to better understand what it actually means to be a mindful player.

“We’ve been reading this book called Mind Gym to try and help us focus on the mental side of the game because it’s mostly mental and not just physical.” Munson said.

Buel said she has typically assigns reading for her team, so they can improve their mindset to be prepared for college level competition.

“The girls are taking turns reading chapters and then they’re coming back and telling their team what they found important, so we can get their mindset right as they go into games.”

Team chemistry has been a major part of the Cougars success according to Munson.

“[The team chemistry] is really good,” Munson said. “We all love each other and we have fun outside of practice as well.”

Freshman right fielder Kat Hylton also spoke on the subject of team comradery saying, “I think our chemistry is really great it’s just whether we put it all out on the field at the same time like one of us is gonna have an off day it’s bound to happen but we’re all there for each other we’ve got each other’s backs on and off the field.”

One piece of this team that really sets them apart from most other teams in their league is their variety of pitchers. It’s common for softball teams to have one main pitcher, but the Cougars have three and use all three of them throughout their games. Buel said, “We think that’s one of our strengths. We love that we can put anyone out there and kind of do it as a group instead of putting all the pressure on one kid.”

Munson agreed: “I feel like it kind of helps having a lot of pitchers because some of them have different movements and come in at different times to help change up the game.

Hylton and Munson have led the way offensively for Clackamas so far this year. Munson has a batting average of .440 and an on base percentage of

.512. Munson also leads the team in runs batted in with 55 and home runs with 12. Hylton is slightly behind Munson in RBIs (53) and HRs (7) but leads Munson and the rest of the Cougars in OBP with .512. Despite her outstanding stats, Hylton admitted she’s been in a bit of a slump of late.

“The last couple of weeks I’ve been in my own head mostly, but really I’m just tryna have fun,” Hylton said. “Softball’s fun. I’m getting too hard on myself. As a team I think it’s big that we’re still having fun playing for each other but we gotta go do it for ourselves too. I just think we need to stop letting Jess down. She’s gave us a lot to work with and we gotta work with her.”

Munson, who broke the school’s single season HR record last year with 18, is slightly off the pace for catching her own record this season. If Munson stays on her current pace, she’ll finish between 15 and 16 home runs. This season Munson said she’s focusing more on contact than power.

“I’ve just been trying to focus more on getting base hits and getting on base and stuff, but the home runs are always nice,” Munson said.

Munson said they have a strong chance at continuing the Clackamas softball legacy.

“I expect us to place somewhere in the top 5 in the NWAC and we’ll definitely get there as long as we keep doing what we need to do.”

Munson said a strong mentality will take them there.

“I think we honestly need to keep working hard and grinding to keep our mentality at where the end goal is,” Munson said.

Clackamas looks to shake off the rough weekend when they take on Chemeketa Community College at home on Wednesday, April 24.