A team can only climb to the top when they have reached the bottom. The Clackamas Community College Cougars finished the 2015 baseball season last in their division, finishing 14-26.

Head coach Jim Hoppel, who was an assistant coach for 14 years, took over the baseball program last March. As the head coach, Hoppel wants to make the changes necessary to get players to CCC and turn the program around.

Approaching his first year as a head coach, he said, “The biggest thing for me was just trying to get guys to learn how to win at the program. To teach these guys that winning is good, and you can still win,” said Hoppel. “Unfortunately, we didn’t play as well as we could’ve.”

The team got along well and didn’t struggle with issues of guys thinking they were better than their teammates. Hoppel has seen similar problems in the past from guys and things didn’t go well.

Leading the team batting average at .286, Corey Wynant is a third-year sophomore transfer from Lane Community College. Wynant has no regrets leaving Lane, one of the top teams in the division, to play for CCC.

“I think Jim is a great coach and I think he’s going to turn the program around pretty quickly,” said Wynant. “This year is a steppingstone. It’s never easy for someone to come in and take the program and be supper good all of a sudden.”

The Cougars dealt with a 12-game losing streak in the middle of the season.

“In certain cases, we didn’t throw strikes,” said freshman first baseman Taylor Tibbets. “Some attitudes weren’t the best at times. Nobody was perfect, everybody had their own little mistakes. It was a team effort. It’s a team sport; that’s just how it goes.”

At one early April game against Linn-Benton Community College, the Cougars were leading into the ninth inning, 7-0, and three outs away from a win. They lost.

“Took the wind out of our sails. It was a tough atmosphere to be in,” said Hoppel. “They took that pretty hard as a team.”

Sophomore pitcher Stephen Parker had pitched an eighth-inning shutout against Linn-Benton Community College and had the ball pulled from him going into the ninth.

“Those still kill me to this day,” said Parker. “Yeah it still affects me. It’s still kinda tough to watch a game go like that. I still haven’t fully recovered from that. It shows on my stat sheet. Those are tough to swallow.”

The losing streak ended with a 4-3 win against Lane Community College. Wins continued to come, and so did more losses.

“We took too many (losses) to learn, is what I think,” said sophomore shortstop Trevor Achenbach.

Despite the hard season, players are hopeful for the future of CCC baseball.

There is a stronger focus on recruiting from Hoppel and the other coaches.

Sophomore pitcher Mychal Yarbor said, “He (Hoppel) definitely helps you get recruited, I know that. As a sophomore, he gets your name out there. And I think that’s why we have so many new guys in. He worked his butt off in the summer and before fall ball.”.

“I appreciate our coaches this year. They worked hard. They did stuff differently this year than last year,” said Achenbach, who will be attending Oklahoma Wesleyan University. “It may not have done anything this year but, I think, over time the program is definitely going to get a lot better.”

This year Hoppel gave his sophomores a lot more responsibility during this season. The team picked captains and did drills on their own. Practices included more stretching and a weight program to help all the players improve.

“This is an up and coming program,” said Wynant. “Don’t doubt Clackamas because, you know what, they’ll bite you in the butt.” 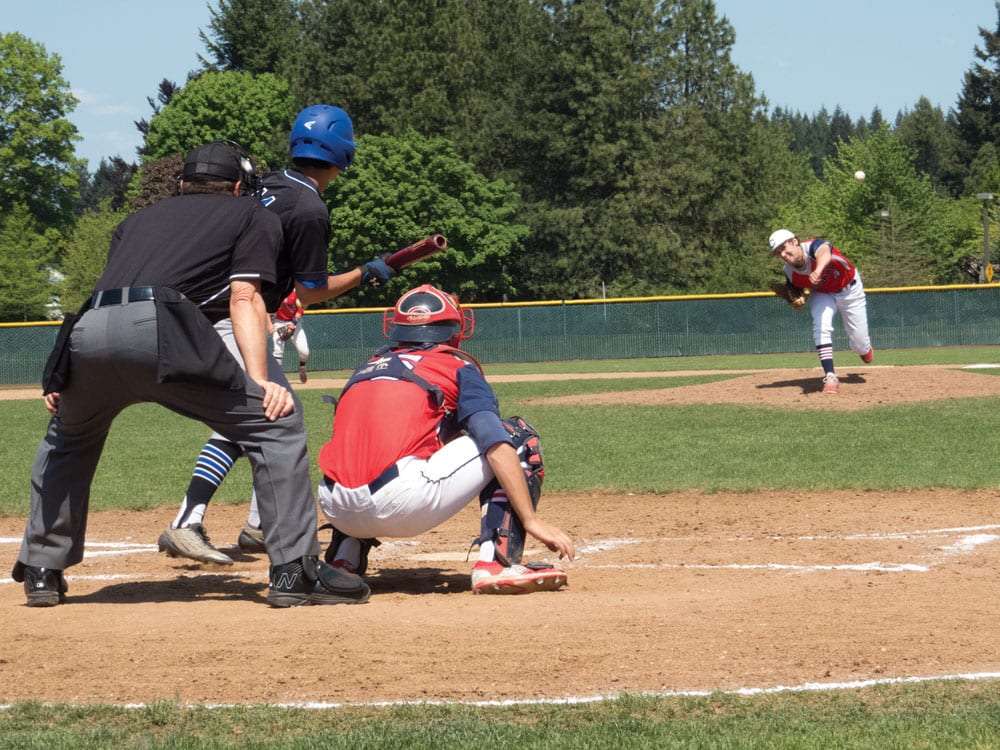