Took down at the take down

When I first step into Randall gym, memories of day-long tournaments flooded to life. Families in the stands eager to cheer on their personal champion, wrestlers aplenty going through the warm up motions and the sound of mat shoes slipping and sliding.

It’s been a year since I last wrestled, at last year’s takedown tournament.

This year marks the 35th year in which Clackamas Communities College has hosted their wrestling takedown tournament, a bracket tournament comprised of several matches with three one-minute rounds a piece. All ages are welcome, from elementary school students to open ages.

At 172 pounds, I’m 10 pounds lighter than when I wrestled in high school. I lace up my shoes and hit the mats for a warm up before the tournament begins.

Boxing has kept my body in shape, yet I still find my joints creaking as I roll around the mats. I chat with some of the wrestlers currently on the team at my old high school and try and get a crash course in the sport I once dedicated hours to.

The movements don’t feel right, and I find myself struggling to stay in stance and I can tell I’m in for a rough time.

Placed in the open 174 bracket consisting of six wrestlers, I’m pooled with four CCC wrestlers and another unassigned wrestler. Our bracket competes last, so I resign to watching other wrestlers as I wait for my match. As I pace through the gym I see kids as young as six competing against each other, though it’s difficult to make the distinction between wrestling and flailing around.

As the tournament progresses, the ages increase and my patience lessens. I grow more and more restless, eager to see how I fair against disciplined wrestlers. I’m given a bye in the first round, so I watch the others in my bracket compete. Within the first round of the first match I can tell I’m in over my head. Pairs practically sprint at eachother with astounding speed, there’s single and double legs all over the place and they’re all close point matches.

Finally my name is called and I’m placed against Israel Casarez, the 162 pounder for CCC. We check in with the judges and are assigned either red or green ankle straps for score keeping. We meet in the center of the mat, and the ref initiates the match.

Instantly my fears are confirmed, as I’m scored on in less than ten seconds. The difference in strength is most notable, as is speed. Before I know it I’m being flung around the ring left and right, each time I rise more confused with how I was just took down.

I manage to bounce back each time, yet it seems to be to no avail and the match is over  before I can even attempt to score a single point. Casarez gives me a fist bump and a “good match” as he reports his win to the table.

I step off, gassed out and in desperate need of water. My head aches as I step out into the hallway and try to hydrate. I sit down for a couple minutes and then return to the assigned mat to await my next beating.

A few of the wrestlers opt out halfway through the bracket, leaving me with just one more match before it comes to a close. I inform some of the other wrestlers on my defeat, which surprises no one. Time slips through my fingers as I try and learn as much as I can from the other wrestlers in my bracket before I’m subjected to another whopping.

Once more, the judges call my name and the match is announced. Nate Johnson is my opponent, and I’m determined to not lose so easily. The first round begins and instantly I feel a second wind.

It by no means refreshes my past knowledge of wrestling, rather it gives me the strength to hold my own against a more seasoned enemy. It’s a solid 30 seconds before his first score on me, and it followed many snap downs and sprawls on my part. I can’t find a single shot, leaving my only opportunities to snapping and clinching.

The second round begins and within five seconds he shoots and picks me up. If it weren’t for the referees telling Johnson to give me a “soft landing,” , I probably would’ve been slammed unconscious.

It’s 0-3 and my second wind left a ways back. I’m struggling to stay in stance as he continues his assault, though he’s not in peak condition either. The round ends with both of us nearing exhaustion. The final round starts and I attempt several shots, all fruitless. It’s not long before he scores the final two points and ends the match. I stand with a partial cut on my left eye and an aching right knee and left foot. I wish him luck in the rest of the tournament and thank him for the competition.

As I stumble out into the hallway and attempt to stabilize myself, I hazily appreciate the opportunity I was given today. While it may not seem like it, I’m confident I’ve grown a lot since last year’s competition. I also am shocked as to how well rounded the other wrestlers in my bracket were, and hope that I can achieve that proficiency one day with boxing. Those thoughts of grandeur are cut short, however, as my body subconsciously lunges towards the nearest trash can where I bid my lunch a farewell. 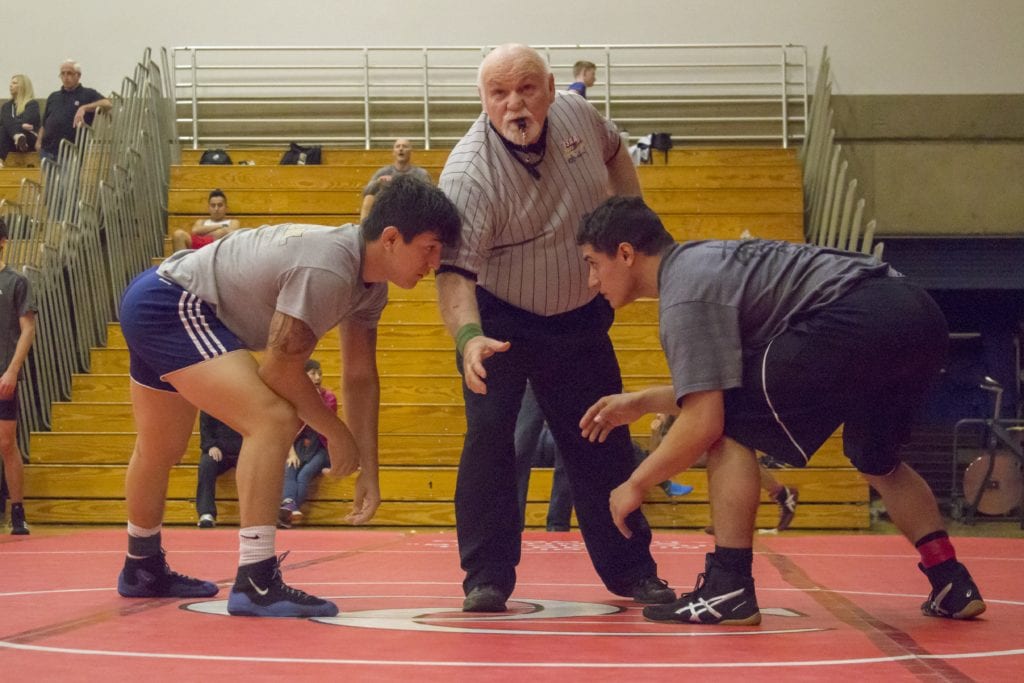