The agony of defeat. This week brings a new lesson for the Cougars as they pick up their first two losses of the season.

Prior to Saturday’s dual against second-ranked North Idaho College and NAIA, second-ranked Southern Oregon University, the number one ranked Cougars were 13-0.

Clackamas wrestlers faced off with two teams Saturday, Jan. 24, for a dual held in the Randall Gym.

Morin had to win his match for CCC to win the dual. Cougar country was loud and their excitement was felt by Morin.

“I was jacked pumped with everyone yelling,” said Morin. Just like the excitement, Cougar fans’ disbelief hung in the air when CCC received its first loss.

“Down by two, the dual meet came down to me,” said Morin. “I was disappointed when I lost.”

There wasn’t time for the Cougars to think about the loss, as the Southern Oregon dual was approaching quickly.

“It was a hard transition especially after that close one,” said head coach Josh Rhoden.

After losing his first match, 7-4, in the North Idaho dual, Robbie Rizzolino bounced back and destroyed Southern Oregon’s Francis Llorente 15-0 in the 141 weight match.

The 174-weight match brought an interesting twist to the drama unfolding in Randall Hall.

Both CCC’s Dylan Reel and Southern Oregon’s Brock Gutches are ranked No. 1 in their respective associations.

Reel and Gutches also knew each other from wrestling activities last summer.

“I have a great deal of respect for him,” said Reel.

Gutches walked away with the win and a scratch, which the two guys joked about after the dual. Minor split second mistakes were the difference in the match, and Reel knows he is able to identify those mistakes.

Regardless of a tough weekend, the Cougars still have their confidence and heads held high.

“Keep improving when it matters most, at the end of the year,” Rizzolino said. “Hopefully, we’ll finish strong and be ready for nationals.”

Two starters were out due to injuries and resting for the end of the year. This did give the Cougars unwanted forfeits during the dual.

Coach Rhoden said, “Still just practicing for February and the National Championships.” North Idaho will likely be an opponent seen at Regionals and Nationals. Morin said, “I get closer and closer every time I wrestle. Next time should be better.”

With the dual behind them, Reel said, “I want to thank our guys for really fighting in adversity. It says a lot about our team.” 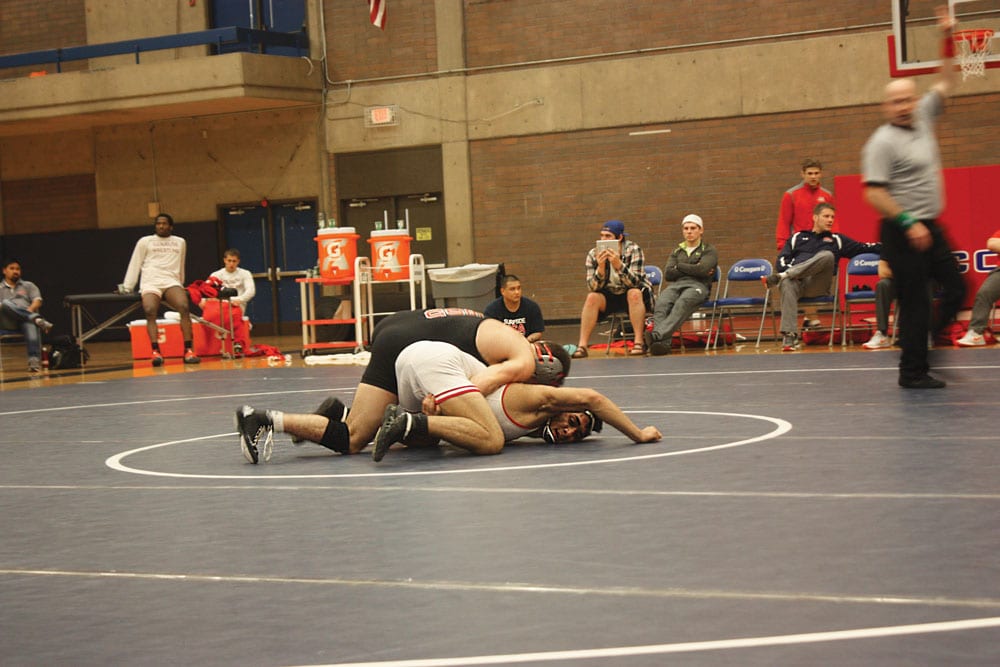