After competing in 13 meets, Clackamas Community College’s track and field program’s season concluded with the Northwest Athletic Conference Track and Field Championship on May 21 and 22.

The Cougars had enjoyed a successful season with many of their athletes nationally ranked, like freshman J.J. Walker, who’s 6145 points in the NWAC multi-event Championship would have finished third in the Decathlon at the PAC-12 Championship. Sophomore Lydia Pavlenko ranked No. 11 in the nation in High Jump with a distance of 1.67 meters, and No. 14 in the nation with a Triple Jump of 11.83m at WAR XI. Alyssa Smith was also nationally ranked in the Pole Vault with a height of 3.45m, ranking No. 8 in the country.

“We went back and looked at our predictions [the meet], and we’re up a little bit from were we thought we’d be for both the men’s and women’s teams.” Head Coach Keoni McHone said the morning of the second day.

Pavlenko was lighting it up in the jumping events; Pavlenko took third place in the High Jump with a jump of 1.60m, first in Long Jump (5.53m,) and first in Triple Jump with an 11.99m jump that broke the CCC record and tied a NWAC record set in 1986. 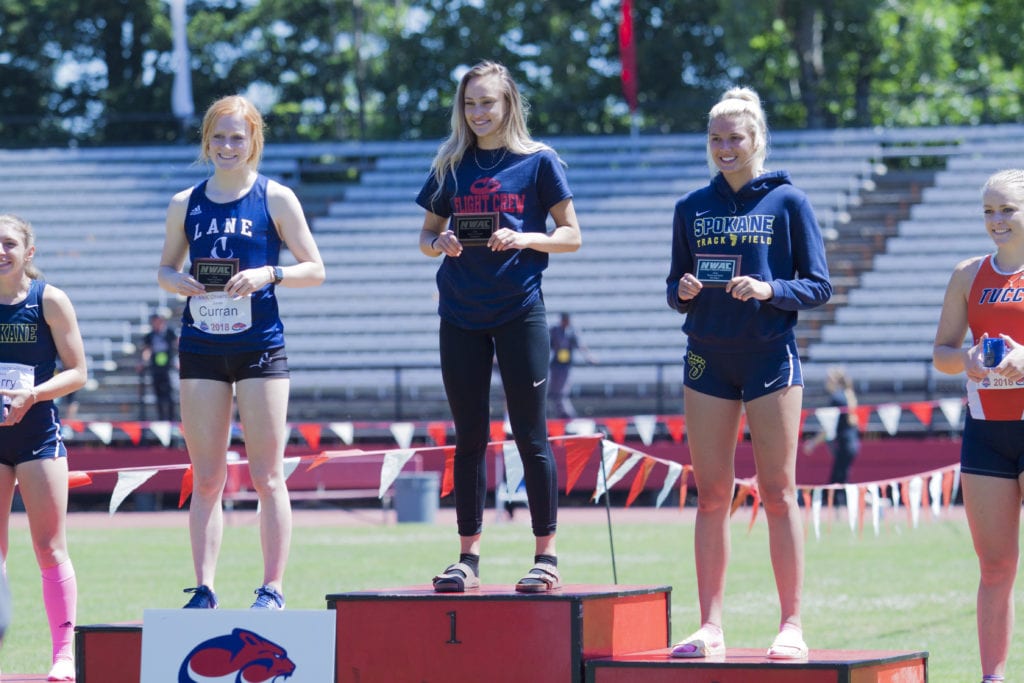 “I have been focusing on speed work all season long because last year I wasn’t as fast, so speed coming down the runway was the main thing I was working on all year long,” Pavlenko said.

Last year Pavlenko missed first place in the Triple Jump and said she felt really good about her performance as a whole.

Foster’s performance in the 400m hurdles broke a CCC record held by Lisa O’Dea, who set the record in 1978.

On the men’s side of competition, freshman Anthony Albright took first place in the 100m dash with a time of 10.61. Freshman Jordan Gloden was in a photo finish race where he missed a first place finish by .01. Finishing with a time of 15.03, Gloden finished second.

Freshman J.J. Walker competed in multiple events including the Decathlon. Walker finished in a four-way tie for second place in the High Jump (1.90m,) fifth place in the Pole Vault (4.05m,) and fifth in the Javalin (49.62m.) Walker took first place in the Decathlon and helped the 4x400m team take third place (3:23.33.)

“I smashed my [personal record] in High Jump, I’ve kind of finished fifth all around,” Walker said. “It’s good points for the team so I’m happy with my  performance.”

Carter did more than just run in the NWAC Championships meet, after finishing third with the 4x100m and 4x400m relay teams, Carter leaped into third place in the Long Jump (6.93m.)

Devin Meade took third in the Triple Jump (14.15m) and in the throwing, Nick Mckenzie hurled a hammer 47.79m to take second in the Hammer Toss.

“We are very happy about how the team competed.  We finished a few points ahead of what we predicted on both sides,” McHone stated in an email.

The Cougars finished the season with six All-American athletes on the men’s side with Gloden, Walker, Carter, Meade, Mckenzie and freshman Sam Cole all recieving honors. The women’s team had three All-Americans with Foster, Smith and Pavlenko.

Both teams exceeded project placements at the NWAC Championships and with that comes a lot of hope as well as pressure leading into the next season.