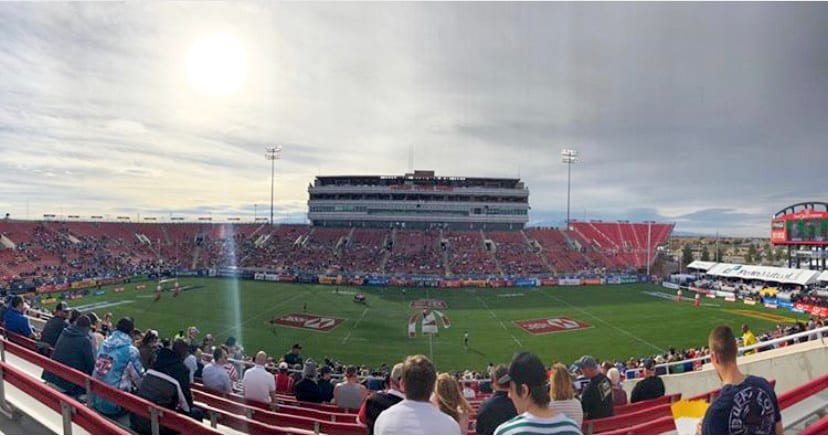 Story and photo by Cole Sowders

Before Mike Friday took the helm ahead of the 2014- 2015 season, the USA rugby team had played just one tournament final. Under him they’ve reached seven, including all four this season. Unfortunately, the Eagles have come up short in each of those championship matches. That changed the weekend of March 1 in Las Vegas, Nevada. The Eagles, led by Folau Niua, captured their second straight cup on American soil. Niua is the most important cog in the best restart- winning team in the world. Niua also directs the attack with ball in hand. The two-time World Rugby 7s Player of the Year, Perry Baker, was out with a broken jaw he suffered in the Hamilton, New Zealand tournament. Replacing Baker was Carlin Isles, who led the world in tries last season, banking most of them when Baker was out with injury. Isles is two tries short of world-leader Alasio Naduva this season, but has set the mark for clean breaks with 18.

Historically the top eight played for the cup (1st Place), and the bottom eight, or bottom four for the women, vied for the bowl (9th). The consolation trophy in the cup bracket was the Plate (5th), and the consolation trophy for the bowl bracket (only for the men) was the shield (12th). Now there are no more dinnerware related consolation trophies. As in tradition in rugby as a whole, the top trophy will still be a cup, accompanied by gold medals. Second place gets silver and third gets bronze. There is a challenge trophy for the winner of the bottom-eight competition. The group stage consists of round-robin play amongst four-team pools. After pool play, the 16 team field was, and still is, split into the top eight and bottom eight.

The top eight play for first place, while the bottom eight play for ninth. With four pools of four, the top two teams in each pool advance to the top eight. Pools are decided by a points system. Wins are worth 3, ties 2 and losses 1. Most often, teams who finish 2-1 or better will get into the top eight, but not always. Occasionally, three-way ties are created in particularly competitive pools, leaving a 2-1 team out of the mix or including a 1-2 or a 1-1-1 side. If there’s a tie in points, seeding is based on point differential.

USA in their valiant effort went 2-1 on the first two days of pool play, losing to Argentina and beating out France and Kenya. They then had a tough road to the Cup final by beating top team South Africa the second day with their quarter-final win. The last day they had the toughest challenge facing New Zealand in semi-final action, beating them 24-19 in the final play with no time left on the clock. The Cup final was against 10th place Samoa, who the Americans handled easily 27-0 on their way to their second home cup win ever.