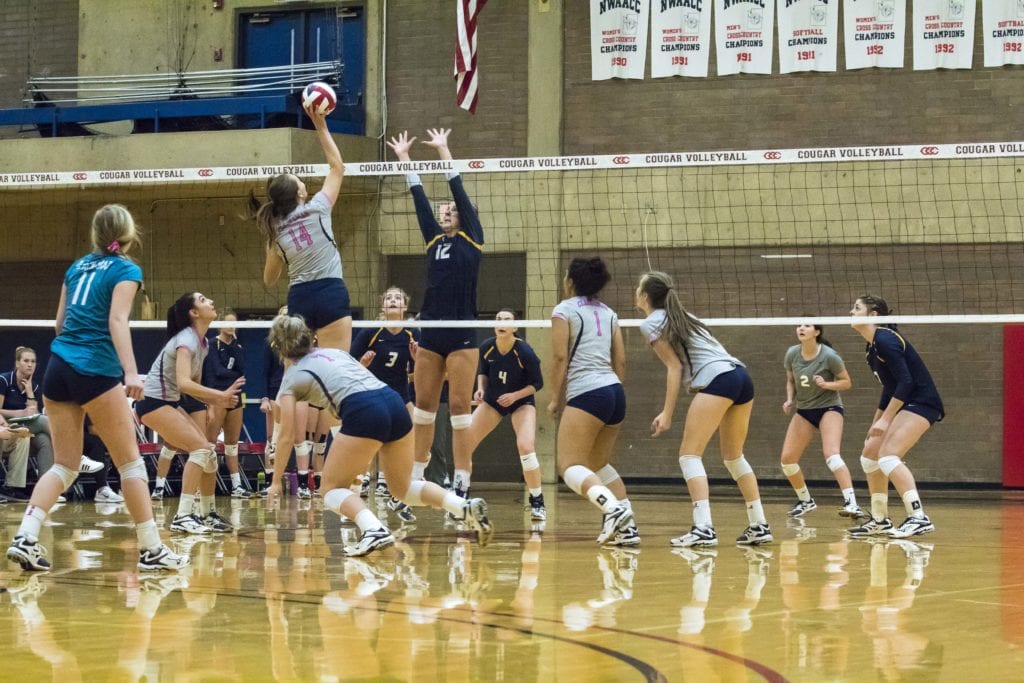 Friday, Oct. 6 matched the Clackamas Cougars (10-15 overall, 1-6 in conference) against the division leading Linn- Benton Roadrunners (22-4 overall, 7-0 in conference). The Cougars came into Friday’s match on a four-game losing streak that dates back to Sept. 23, while Linn-Benton came into the match on a 10-game winning streak.

Clackamas started the match strong, battling back and forth with Linn-Benton, and took an 18-17 lead on freshman outside hitter Hanna Yamashita’s Ace, and would extend the lead out to 21-18, but ultimately dropped the first set 25-23.

“We were super pumped after the first set,” said sophomore setter Sierra Lowe. “We were able to take a set off Linn-Benton last time we played them so I think we were ready for that.”

The third, and final, set of the evening started with Clackamas getting out to a 2-0 lead, before Linn-Benton went on to outscore the Cougars 24-10. The Cougars scored four straight points to keep the match going, but eventually Linn Benton’s middle backer Sierra Mauro had the kill to end the match.

“We really executed our passing, and trying to find the holes within the other team,” said sophomore libero Autumn Westergren.

The Cougars continue to struggle but have a lot of young talent, only having two sophomores on the roster.

“In a good way, things are looking towards the future,” said Lowe. “The college game is a new game no matter where you came from and getting the feel for the next year, and setting them up for success.”

With the loss, Clackamas falls to 10-16 overall on the season with a record of 1-7 in league. Westergren is optimistic the Cougars can turn this season around.

“We have the skills and what it takes to be a winning team,” said Westergren. “We just have to execute on the court and through practice because we practice hard, and we play hard. We just have to make it happen.”