Whatever floats your pumpkin? 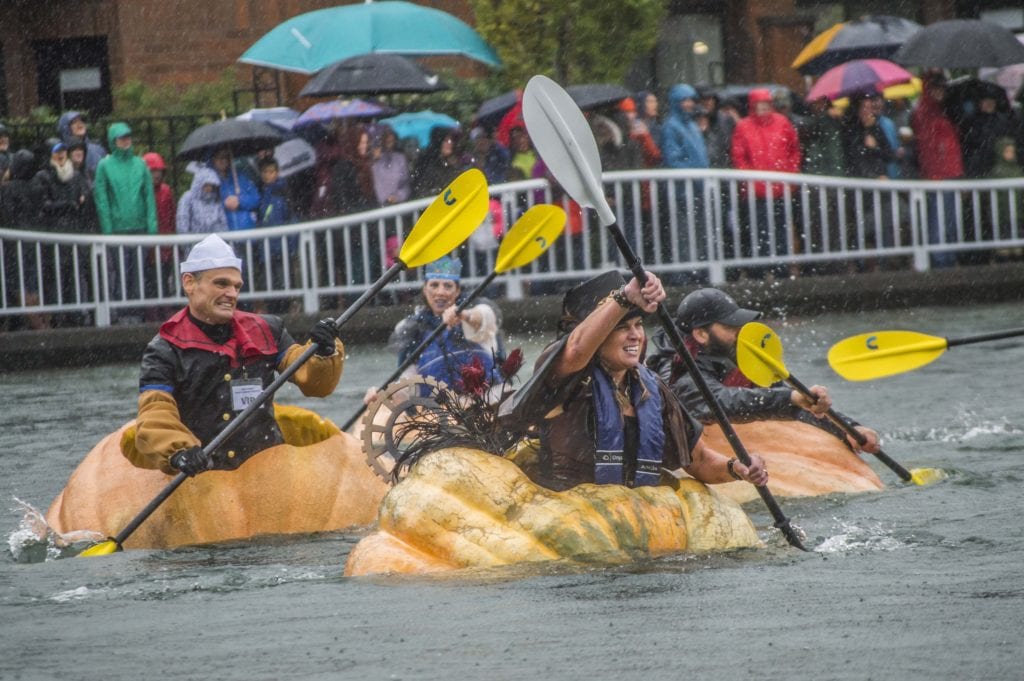 Story and photo by Ali Miller

What do you get when you combine over an inch of rain, gusting winds, chilly temperatures and 14 giant pumpkins on a lake? The 14th annual West Coast Giant Pumpkin Regatta in Tualatin.

Every year in October, Tualatin and the Pacific Giant Vegetable Growers team up to pull off a race of costumed paddlers in the Tualatin Commons, a lake in the center of apartments, offices and restaurants. Forklifts shuttle the massive gourds to the inspection and weigh in before the races start. All the pumpkins weigh around half a ton prior to their preparation. The soon-to-be boats are gently lowered into the lake where volunteers spin the pumpkins to see which side naturally sits upright. They are then cut open, the seeds are carefully removed for next year’s crop and the innards are scooped out. Spectators were able to sit in the giant pumpkins for photo opportunities, the chaperones helping them into the bellies of the pumpkins.

Despite the heavy rains and wind gusts people flocked to the festival while trying to stay dry under umbrellas. People were enjoying the activities scattered around the lake, while sipping free hot chocolate in hand. The Regatta also had many other options such as a costume contest, mini-golf driving range and pumpkin pie eating contest.

The Regatta was broken up into five heats ranging in size from seven to 14 paddlers. The course ran as a down- and-back race from the start line around a pylon and back to the starting line. The first heat was made up of growers, and all but one paddler made it back to the finish line. One pumpkin sank and the paddler hitched a ride back to the staging area from a safety kayaker.

The second heat was local sponsors, and the objective of the race was for each paddler to collect a yellow, green and blue ball from the floating pumpkins scattered around the course to win. Hillsboro Hops Mark Miller and Santa of The Santa Project were among the paddlers. Miller became tangled in the blue ball buckets rigging and attempted to detangle himself as he lost what little lead he had.

Another paddler went into the lake, and Miller’s attempt at untangling himself was unknowingly unsuccessful as the crowd let him know he was dragging the blue ball station. Other paddlers were meanwhile tossing balls to one another in a show of solidarity, Santa constantly held dead last but stole the show by getting everyone chanting “Santa, Santa, Santa!” He took the opportunity to promote his cause, The Santa Project, and even paused to take selfies in the middle of the race. The announcer had to remind Santa that his pumpkin was needed for the next race and he needed to get back to paddling.

The third heat was Cops v. Firefighters, a traditional American battle. The objective was for every team member to get a rubber duckie from across the lake and get back to the finish line. The cops wore t-shirts saying “Cops … because firemen need heroes too.” The cops won the race and both teams made it out without pumpkin casualties.

The rain began to slam down during the fourth and most dramatic heat. The heat consisted of community members and lottery-drawing winners. Tonya Zwahlen, a graduate of Clackamas Community College and a member of the group Oregon Whitewater Association, a rafting and kayaking group said that when she gets on the water all her stress just falls away.

Zwahlen dedicated her race to Vic LeGall, another member of OWA who passed away Monday, Oct. 15.

“Vic was a beautiful selfless human, beloved in our community,” said Zwahlen.

Zwahlen’s goal for herself was to have fun and stay afloat, but she believed she could win her heat. One paddler lost his pumpkin early in the race but unlike others he refused to give up and he began to swim with his pumpkin. A safety kayaker kept near him in case of trouble, while the crowd cheered enthusiastically.

Zwahlen, dressed as Pippi Longstocking, remained in first place most of her heat, but was overtaken on the last stretch of the race. The paddler-turned swimmer continued to push and pull to almost the very end, and was awarded the overall good sportsman award.

The final heat was highlighted by one paddler who struggled to get going but refused to give up. The crowd cheered him on as he started gaining ground on the heat. Despite his best efforts he finished last.

Laura Halcome and her daughter Lisa enjoyed the festivities that the Regatta offered.

Halcome was visiting from California and watchedthe regatta for the first time.

“I thought it was great,” said Halcome.

Halcome echoed that. “It was a ton of fun, I wish we’d gotten here earlier,” she said.